Glengarry; the Pipes Are Calling 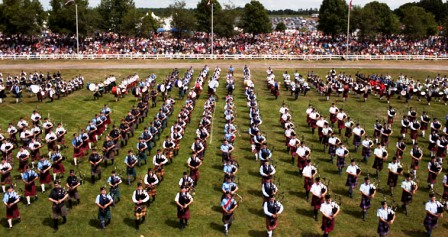 The heart and soul of this weekend’s Glengarry Highland Games are the pipe bands.

Each year the Games proudly hosts the North American Pipe Band Championship that attracts bands from across North America and beyond. The Championship is the last major competition before the Worlds’ that take place two weeks later in Scotland and pipe bands that win at Maxville are confident that they will fare well against their peers in those competitions.

Bands will travel from eight provinces including Alberta, Manitoba, New Brunswick, Nova Scotia, Ontario, Prince Edward Island, Quebec and Saskatchewan, and eight states representing California, Connecticut, Florida, Maryland, Massachusetts, Michigan, New York and Ohio. The grounds will be filled with the stirring sounds of the pipes and drums with pipe bands competing in Judging Circles spread throughout the Games site. Come early to ensure a good spot at the popular Grade One Circle with its bleachers and shady trees for the multitudes of fans who gather to make their own decisions on who is the worthiest of the bands.

Along with many fine judges for the Professional Solos and Pipe Band Competitions, Pipe Band Director Gilbert Young has secured two of the best piping judges in the world in piper John Wilson from Scotland and drummer John Fisher from Vancouver.

John Wilson is a native of Campbeltown, Argyllshire, Scotland. He started competing at the age of 8 years and won all juvenile events in Scotland several times over in the years following. In 1965 he turned to professional piping and won the Argyllshire Gathering Medal for the senior Strathspey & Reel competition at 15 years of age. In 1968 he won the Gold Medal at the Northern Meetings at his first attempt aged 18 years. He joined the Police in 1970 and was Pipe Sergeant of the Strathclyde Police Pipe Band during their period of major championship victories which included 6 consecutive World Championship wins. In total he has won 12 World Pipe Band Championships with Strathclyde Police Pipe Band. John retired from the Police in 2003 and is now a senior adjudicator on the joint approved list for solo piping and the RSPBA panel for pipe bands and also teaches at home and abroad.

John Fisher is one of the most versatile players and educators of our lifetime. His career has spanned over 3 decades dividing his passion between drum set and pipe band genres. He is a former North American Champion and was the lead drummer of the City of Victoria Pipe Band, member of the Shotts & Dykehead Drum Corps under the direction of the legendary Alex Duthart, and former lead drummer of the 78th Fraser Highlanders of Ontario Pipe Band and more recently, the lead drummer of the Spirit of Scotland. Located in Vancouver, John performs and teaches private drum set and pipe band snare drum lessons. In addition, he is one of the most sought-after instructor-performers for many pipe band schools across North America.

Two Days of A Wide Range of Piping Competitions

The North American Pipe Band Championship isn’t the only time to hear excellent pipe band music at the Games. On Friday, July 31, the amateur solo piping and drumming competitions take place followed on Saturday by the professional solo piping and drumming events. In addition, there are amateur piobaireachd (pronounced pee-brock) competitions on Friday as well as Professional Piobaireachd on Saturday.

The Games attracts thousands of people for many reasons – vying for a trophy in one of the many competitions, searching out more about Scottish heritage, listening to the fiddles or harps, dancing up a storm to favourite celtic bands, being awed by the Tattoo spectacular or visiting with friends and family. The site is a bustle of activity as crowds move among the avenues buying souvenirs, searching for memories of their ancestors, rushing off to the next event or tracking down a long lost friend. All of music, movement and laughter come to a hush as the time draws near for the pipe bands’ entry onto the field for the closing massed bands. Wave after wave of pipe bands march onto the field from all corners to the skirl of the pipes playing the crowd’s favourite tunes. Cheers go up from the crowd until over 1600 musicians are arranged on the field before them. Then the crowd goes quiet again as the bands start up in unison for the most unforgettable sight and sound of the massed pipe bands performance. No heart is left unstirred, no eye is dry and no hands are quiet as the piper and drummers start to play and march towards the packed grandstands, turn, and march the other way across the infield to the thunderous applause and cheers of those on the surrounding mounds.

It is a moment in time like no other and one not soon forgotten. For many people, the Games are not the Games until the massed bands have worked their magic and put their seal on the closing of another magnificent Glengarry Highland Games.

“Then slowly, gently, at his side,
All the pipers around replied,
And swelled the glorious strain;
The hearts of all were proud and light,
To hear the music, to see the sight…”
-Robert Buchanan