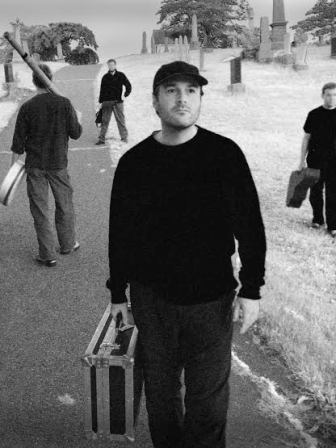 Though Glenn Coolen first appeared on the Eastern Canadian Celtic festival scene as a young Highland dancer, he was quickly captivated by the pipes.

Today, along with being one of the most in-demand musicians in Atlantic Canada, Glenn Coolen is the co-founder – with Gaelic singer Patricia Murray of Prince Edward Island – of the Re-Jigged Festival, an edgy, up and coming Celtic celebration that takes place this weekend in Dartmouth, Nova Scotia.

Coolen’s passion for Celtic culture is deeply rooted; he and his sister made the festival rounds with their parents from an early age.

“My mom and dad were not performers, but they loved the music and wanted us to be involved,” the 44 year-old tells Celtic Life International by phone. “So that is how we spent our summer vacations; at Highland games and festivals in Antigonish, Montreal, Maxville, and anywhere else we could get to. I didn’t have much of a chance of avoiding the music.”

He acknowledges that young male Highland dancers were a rare species at the time, which might explain why piping seemed more appealing.

“Whatever it was, I took easily to the bagpipes, and I’ve been playing since I was about nine years-old.”

Coolen began on the great Highland bagpipe, joined the Dartmouth Boys Pipe and Drum Band – later re-named the Dartmouth and District Pipe Band – and was soon performing and competing extensively.

“It eventually got pretty hectic at the festivals,” he recalls. “I’d be playing personal solos, pipe majoring with my band, and accompanying the dance competitions.”

In his late teens, Coolen got his hands on a set of small pipes, an instrument more traditionally played in the Scottish lowlands and the north of England.

“On the festival circuit we were always trading stories, musical recommendations and CDs, so I was introduced to quite a variety of music. The small pipes pushed me in a new direction.”

The beauty of the small pipes, he notes, was that he could play along with other instruments easily, and it was actually possible to talk over them.

These days he is most often playing the Irish or uilleann pipes and low whistles.

“I love the whistles,” he notes. “Myself and a few others hold sessions around Halifax, generally in pubs, a couple of times a week. Some are performances and some are just casual gatherings. With Irish music you can hear the same tune played several times a night but it will always be different.”

As these sessions are usually held in pubs, audiences have to be over the legal drinking age to attend, making it a challenge for younger people to become better-versed in Irish music.

“That’s why Seph Peters (Nova Scotia multi-instrumentalist) and I started offering workshops. The response very good, and a group of us with different skills decided to create a small festival. We named it Re-Jigged, which seemed to sum up our approach. We’re in our sixth year now, growing it slowly and deliberately.”

Performances, he adds, will make up only one third of the Oct. 23-24 festival, which brands itself as “new trad Celtic” music and dance.

“The rest is about learning and sharing. There’s lots of traditional stuff but it won’t be quite what people have heard before. We are very open to new twists, and to experimentation.”

A trained architect – who currently works as an artistic director and set designer in the film industry – Coolen has more than 70 films and documentaries to his credit. He also has a Celtic music show on a local radio station, and two albums in the works – one is a solo collection, and the other is the third offering from his well-know, long-standing band MacCrimmon’s Revenge.

He expects his eight year-old daughter, Aileigh, will begin playing the pipes next year.

“She is learning piano and harp so she’s about ready for the pipes. Her mother is a fiddler, so she hasn’t much of a chance of avoiding the music.”