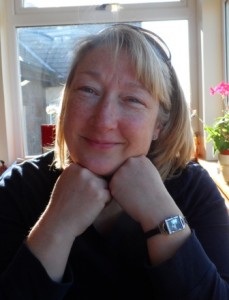 Loch Ness in the Scottish Highlands might be most renowned for its infamous inhabitant, but this weekend’s Glenurquhart Highland Gathering and Games is quickly giving ‘Nessie’ a run for her money as the area’s premier summer attraction. Event secretary Susan Clark gives us the details.

What is your own ethnicity / heritage?
I was born in Scotland to a Scottish mother and English father. On my mothers maternal side I can trace my family tree back to Caithness in the mid 1700’s to a crofting community.  My great, great grandfather served in the military in the late 1700’s/early 1800’s and became a Chelsea Pensioner. On my mother’s paternal side part of the family can be traced back to Ireland, coming to Scotland in the mid 1800’s. The family moved to Stirling close to where I lived for a number of years and I was able last year to take my mum to see the street where they lived. I have lived in Scotland all my life and am married to Neil who is a Bagpiper and can be found playing at Urquhart Castle as the resident Piper this summer.

When and why did you get involved with this event?
Neil & I moved to Drumnadrochit last year where Neil continued to grow his bagpiping business (Great Glen Piping) – he teaches bagpipes face to face and by Skype and so he has many American, Canadian students. He has played bagpipes since he was 4 years old, so over 40 years and having known him for almost 20years, I have been lots and lots of Highland Games. The village was seeking a new secretary when we moved here and Neil came home one day to say he had volunteered me for the role! So, this is my first year as secretary.

What are the challenges of being involved?
As a newcomer to the village and being new to the role, the main challenges for me involve getting to know who does what and when! However, everyone is so helpful and we have a great committee. Organizing a Highland Games is a huge logistical exercise and takes all year to plan! I’m responsible from everything from making sure the toilets arrive to getting the sponsors on board and today I’ve been out lining the field for the athletics events!

What are the rewards?
Rewards are huge. Firstly I’ve met so many people in the village because of this. When we first moved here I was known as the Piper’s Wife! now I’m known as the Games Secretary. Helping to keep the traditions alive and seeing so many people getting involved in a community event is great.

Why is it an important event for the community there?
The community is involved in many ways on the day and it is a way of bringing people from across the community together on one day of the year. We have local events in the morning and our new Drumnadrochit Piping Society will this year be leading them around the field for a small opening ceremony. The Brownies and Guides are also getting involved. The new Drumnadrochit Piping Society will have a lot of youngsters taking part in the solo piping events and for some of them this will be their first competition. We run a tea tent and this is manned in shifts by local ladies. All the event is staffed by volunteers. And this year is extremely important as the park where we hold the Games has recently been taken back into community ownership. So, the Games helps bind the community together and is a chance for people to meet and catch up!

What can attendees expect this year?
We will be holding solo piping, a pipe band will play, heavy events such as tossing the caber and throwing the hammer will be seen, there is a hill race and tug 0’war.

How else are you involved with the Celtic community there?
I’ve already mentioned the Drumnadrochit Piping Society which my husband teaches. this was resurrected earlier this year after being dormant for over 20 years. We now have 18 youngsters coming along every week for tuition. We also have a local real ale pub which hold folk music sessions every  2 weeks which we attend. Our area also has Gaelic medium schools where children are taught in Gaelic and there are adult classes.

What does the future look like for the event?
The future is looking good – I would say that but I get a sense that the Committee are keen to review what’s good and what needs to be improved and are already trying new things. now, I’m away to put up the new bunting the local craft group have made for the event!