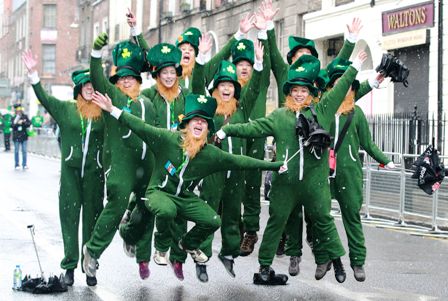 Call it what you like: the Feast of St. Patrick, Lá Fhéile Pádraig or St. Patrick’s Day. What matters most is that it’s once again that time of year when you rumage through your closet, scrounge up as much green as possible and head out to one of the hundreds of annual mid-March parades held around the world in honour of the Emerald Isle’s favourite Saint. Sara E. Baxter tells us more.

St. Patrick himself was actually born in England in 385 AD, died on March 17th, 461 in Ireland, and is buried in Downpatrick, County Down. The first bishop of Armagh is the primary patron saint of Ireland as are Saints Brigit and Columba.

Although Saint Patrick’s Feast Day has been celebrated in Ireland since the ninth century, the celebration of the Apostle of Ireland only found a place on the universal liturgical calender in the 1600s. In 1903 the celebration of the saint became an official public holiday. Southern Ireland’s first St. Patrick’s Day parade took place in Dublin in 1931.

Major cities and many small towns alike are known to host their own annual parades either on the 17th or the closest Saturday or Sunday to that date. In Ontario, for example, Toronto (pop. 2.5 million) hosts an annual parade, as does Vankleek Hill (pop. nearly 2,000).

“It’s almost a full-time job, with thousands and thousands of hours put in,” points out Kevin Murphy, vice president of advertising and public relations for the United Irish Societies of Montreal, and one of about 20 people on the organizing committee.

“Organizing starts at the end of one parade and goes until the next parade.”

St. Patrick’s Day parades have taken place in Montreal every year since 1824, with the United Irish Societies of Montreal organizing the event since 1929.

“This year’s event will be the 192nd annual parade,” says Murphy, noting that while New York has cancelled its parade on several occasions, only one attempt was ever made to put a halt to the parade in Montreal. That was in 1917 with the onset of World War I.

“Irish people went out and marched anyways,” notes Murphy. “That’s how important heritage is to the Irish in Montreal.”

There are 118 entrants set to take part in the 2015 Montreal parade on March 22nd, including some 20 floats, numerous walking groups, bands, entertainers, businesses, and community groups and organizations.

“Usually there’s anywhere between 250,000 and 700,000 spectators,” says Murphy noting attendance is always heavily dependent on the weather the day of the event.

Montreal’s parade route runs two kilometers, with many spectators lined up along Ste. Catherine Street well before the noon start.

“When the first entry in the parade reaches the end point, some entrants haven’t even shown up yet to take their place in line,” said Murphy, demonstrating just how far the parade line-up extends. “We have staggered arrival times because there’s not enough room for everyone to line up even though the staging area is three lanes wide along a 1.5 kilometer stretch.”

About 3,000 people take part in the Montreal parade with an audience made up of those from all across Canada, as well as the US and abroad.

This year’s Grand Marshall will be local Liberal Party MNA Geoffrey Kelley. “This is an honour we wanted to bestow on him and of course we’re honoured to have him,” says Murphy about the politician who has helped promote the Irish community throughout the region.

Murphy points out that the Montreal event is always very much an all-inclusive affair, with many cultures and nations registered and represented in the parade.Interestingly enough, points out Murphy, Irish roots can be found in almost half of all Quebecers who reside in the predominantly French-speaking province.

“It’s said that 40 per cent of Quebecers have Irish heritage,” he says. “If you’re talking about eight million people in Quebec, that means about 3.25 million Quebecers have Irish in them. That’s unbelievable when you consider the population of Ireland is about 4.5 million.”

Possibly a highlight of the Montreal parade is the fact that there’s always a good chance you’ll bump into someone that you know. “This really is a neighbourhood parade, on a much larger scale,” says Murphy. “Your neighbour can walk by and you’ll recognize him, whereas in other cities it’s just more of a march-past.”

New York City has long hosted the world’s largest, oldest St. Patrick’s Day parade, begun in 1762. The 2015 parade will make its way along the 1.5 kilometer stretch on 5th Avenue between 44th and 79th Street, starting at 11 a.m. on St. Patrick’s Day. As always, the parade will be broadcast live from start to finish. Keeping with tradition, the 69th Infantry Regiment will lead the five-hour-long event. New York City’s parade differs from most in that all 150,000 people registered to take part in the event make their way along the parade route on foot. No motor vehicles whatsoever take part along the parade route. About two million spectators show up every year to enjoy the spectacle.

In Massachusetts, South Boston’s St. Patrick’s Day Parade is ranked as the second largest parade of its kind throughout the US. The event, which got its start in 1901, is televised from start to finish, with as many as one million spectators lining the parade route to celebrate the grand event.

In Belfast, the 9th Annual St. Patrick’s Day Parade is set to get underway on the 17th at noon.“It’s a huge challenge but it’s what we do,” says Matt Vernon, a development worker and carnival artist with Beat Carnival, which organizes the event. “It’s complicated here because St. Patrick’s Day is not a national holiday for everybody in Belfast. Only half the schools would have the day off.”

The parade’s lineup includes several floats, marching pipe bands, and a large contingent of community participation. “There are about 500 people who take part in the parade,” notes Vernon. “Our crowd numbers are normally in the region of 30,000.”

Belfast’s Lord Mayor Nichola Mallon will lead this year’s parade, followed by a pipe band and a large St. Patrick’s puppet, as it makes its way from City Hall, down to Chichester Street and onto Victoria Street. The parade will end at Custom House Square where a massive free open air concert will take place.

“We’re trying to make the event as inclusive as possible for all members of society, and halt St. Patrick’s Day from being a partisan parade,” says Vernon. “There’s absolutely no politics involved in it for us. It’s a tightrope and that’s the difficult line we have to tread. We want to try to please as many people as possible, and that’s why it’s a challenge.”

While the event always receives positive feedback, Vernon is well aware that parades outside of Ireland attract the hugest fanfare. “Definitely America and Canada go hell for leather at it,” he laughs. “Some people over here may look at the parades in Canada and America as a benchmark for what to aim for here but actually, in Ireland, a St. Patrick’s Day parade is a small community parade. It’s understated. The budget they have for these types of events in New York and Montreal is a lot bigger than what we have to work with over here.”

In Dublin, however, the 2015 St. Patrick’s Festival Parade is set to be a grand affair indeed. The parade sets off at noon on the 17th, commencing a winding 2.7 kilometer journey before reaching its ending point just past St. Patrick’s Cathedral.

About 500,000 spectators are anticipated at the parade, which will include Irish president Michael D. Higgins and Dublin’s Lord Mayor Christy Burke, and will be televised globally.

“As Lord Mayor of Dublin, I lead Dublin’s St. Patrick’s Day Parade in the historic Lord Mayor’s Coach until the Parade reaches the viewing stand,” says Burke of his role in the grand affair, followed by his stepping out of the coach and reviewing the parade. “I have attended many St. Patrick’s Day parades but this is my first as Lord Mayor.”

Ireland’s largest of such parades is a major international event, reminds Burke as he shares a moment with Celtic Life International.  “I’m happy to take this opportunity to extend my best wishes to all the Irish Diaspora living in Canada and all over the world.”

While Japan might not be among the first countries that jump to mind when considering St. Patrick’s Day parades, the Asian nation does host its own selection of parades to celebrate Ireland’s patron saint.

Haruka Masumizu is public relations officer of Irish Network Japan. “We hold St. Patrick’s Day parades in nearly 10 prefectures in Japan,” said Masumizu. “The oldest and the biggest is held in Tokyo, which will mark the 23rd parade this year.”

Possibly one of the smaller, quirkiest St. Patrick’s Day parades will be the one that takes place in the hometown of past US President Bill Clinton.

Chrissy Eggleston is the marketing director of Visit Hot Springs, which hosts the annual World’s Shortest St. Patrick’s Day Parade. This year, on the 17th, the 12th annual Arkansas parade will make its way along what is arguably the shortest of such parade routes throughout the entire world.

“Bridge Street in downtown Hot Springs was named by Ripley’s Believe it or Not as the world’s shortest street in everyday use,” says Egleston of the parade route. “It comes in at a whopping 98 feet long.”

But don’t let the name of the Spa City’s parade fool you.

About 40 entrants participate each year, including marching groups, floats, Irish wolfhounds, dancers, singers, performance artists, celebrities and Dallas cowboy cheerleaders. One of the parade’s highlights is the much-anticipated International Order of the Marching Elvi, which includes 50 Elvis impersonators in their finest green attire. Celebrities like Bo Derek have held the post of Grand Marshal in years past, with NASCAR legend and Arkansas native Mark Martin assuming the role this year.

“It’s not a short parade, it’s just a short street so that’s where the name comes from,” says Egleston, noting the population of Hot Springs proper is about 35,000 and the attendance at last year’s parade was 30,002. “We’ve already announced the anticipated attendance for this year,” declares Egleston. “It’s going to be 30,006.”

One might wonder, of all places for a St. Patrick’s Day parade, why Arkansas? “You know what they say,” laughs Egleston. “Everyone’s Irish on St. Patrick’s day.”