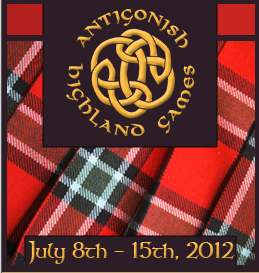 This week, thousands of Celts from all over the world will gather in the quiet community of Antigonish, Nova Scotia for the oldest Highland Games outside of Scotland. The event’s marketing chair, Melissa MacMaster, gives us an inside perspective on one of the world’s most renowned Celtic celebrations.

What is the event’s core mandate?
Our mission is to protect and perpetuate the language, customs, music and games of the Highlands. The Antigonish Highland Games provides the greatest vehicle for showcasing the Scottish heritage and culture of the Celts.

Wow has it grown over the years?
What makes the festival so special is that the event has two equally important halves – the Highland Games (piping and drumming, highland dancing and traditional athletics) and the Scottish Festival (entertainment, clans and workshops) The festival features new and young artisans coupled with professional performers in a series of under tent ceildhs and Main Stage Concerts. Our athletic competitions include the six disciplines of Ancient Scottish Heavy Events, Bike Race, Highland Dance, Piping & Drumming, Tug-of-War and the 5 mile road race.

Who attends the gathering?
The Antigonish Highland Games is a showcase of Scottish culture that is rated among the top three in Canada. Its reputation worldwide has been built on authenticity, attention to detail and hospitality that makes it a must see event for the thousands of spectators around the world who make the annual trek to attend. Over the past couple of years we have noticed that more spectators from Atlantic Canada have been visiting. We feel that this geographic shift in tourism is due to the higher costs associated with traveling.

What can they expect to experience this year?
Columbus Field will be full of entertainers, athletes, dancers, and musicians all weekend. One can also visit Vendor Village for some traditional foods and merchandise or stroll to Clan Post to find out more about family history and heritage. Saturday, July 14th and Sunday July 15th, spectators will also get to see some exciting competitions. Starting Saturday morning before the Grand Street parade will be  the Elite Mile, followed by the Canada vs. USA Heavy Events Challenge, the Premier and Pre-Premier Highland Dancing, opening round Tug o’ War and the Nova Scotia and Atlantic Canada Pipe Band Championships. Sunday, being the busiest day of the Games draws spectators out to watch the Tug O’ War Championship pulls, the Canadian Farmers Walk Championship, the Challenge Sheaf Toss, Challenge Caber and the Mass Pipe Bands. There will be something of interest for everyone at this year’s Antigonish Highland Games. New to the Games this year is: Friday, July 13th is dedicated to children ages 5-12 with Tìr Nan Òg, Gaelic for the “Land of the Youth.” In the morning children can take part in fun athletic competitions including a mini caber toss, standing long jump and 50, 100 and 200 metre dashes. Following the Tìr Nan Òg competition, in the afternoon children will have the opportunity to participate in numerous cultural workshops including Gaelic Language and Storytelling, Gaelic Song and Milling Frolic, Step Dancing, Drumming and Making Oatcakes. Saturday Night Main Stage will host an exciting original production entitled The Ships of 1801; a thematic concert of song, story and verse that tells of the hardships and hopes of Scottish immigrants as they embark on a dangerous voyage from Ft. William, in the Highlands of Scotland, in 1801 to Antigonish, Pictou and Inverness aboard five ships; The Sarah, The Nora, The Dove, The Good Intent and The Hope.

Why is it an important event for the non-Celtic community there?
It is an important event for the non-Celtic community because the non-Celtic community can be exposed to the Celtic culture. The week long schedule of events blends spirited competition featuring athletes, pipe and drum bands, and highland dancers from across the country and around the world, with Scottish flavored ceilidhs, clan activities, and concerts. Through this exposure it is our hopes that they will return to the Antigonish Highland Games in the years to come or attend the numerous events that take place throughout the year to preserves and promote the Celtic culture.

What are the plans for the event in the years ahead?
Next year the Antigonish Highland Games will be celebrating its 150th Anniversary. We are currently in the planning stage for next year’s big anniversary with lots of exciting events in the works.

Is enough being done to preserve and promote Celtic culture?
I believe over the past couple of years Antigonish has really been actively involved in preserving and promoting the Celtic Culture. This has been done through a number of organizations including the Antigonish Highland Society, the N.S Office of Gaelic Affairs, the StFX Celtic Department and the Straight Regional School Board through their Gaelic Classes. I would say that Antigonish is a very vibrant community in promoting the Celtic culture.

What can we be doing better?
I think overall we are doing a great job. Each year we are enhancing the different components of our events and are continuously asking for feedback from our spectators and implementing their recommendations. If we stay focused on what our mandate is and keep listening to our spectators our games will continuously keep getting better.