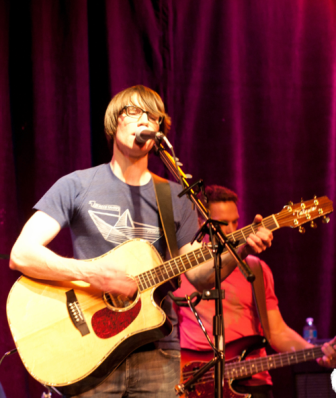 Regina, Saskatchewan, Canada might be one of the coldest places in the world this week, but eight-piece Alt-Country-Celtic band Government Town is doing what it can to keep things warm with carefully-crafted arrangements and lush harmonies. Recently we spoke with the group’s vocalist Michael Harmel.

What is your own background/ethnic heritage?
I don’t come from Celtic ancestry, however my mother was born and raised in Halifax, Nova Scotia, and I have always felt a strong connection with Maritime music. A number of the band members also have Celtic roots.

When and why did you start playing music?
I picked up my first guitar when I was 19. A few friends of mine were teaching themselves how to play with the intent of starting a band. As a music fan, the idea of making music with good friends appealed to me.

Are they the same reasons you do it today?
In a lot of ways they are. I am lucky to be making music with close friends. I also enjoy the creative process.

When and how did the band come together?
The band formed in 2011. I was looking to start a band and approached 2 friends of mine, Chris (lead guitar) and Brad (bass). Fortunately they were interested and we slowly started recruiting other friends of ours to join in.

How would you describe your sound?
I have heard the music described many ways: folk, rock, alt-country, Celtic, alternative, and even pop. The songs are generally acoustic guitar driven, but incorporate a variety of instruments (electric guitar, violin, piano, mandolin, harmonica, banjo).

What have been some of the band’s career highlights?
We are relatively new to the music scene, but highlights thus far include the release of our debut cd and Christmas single, the radio airplay we have received and the positive response to our live shows.

What were the challenges of putting it together?
With 8 members in the band, all with very busy lives, it can be challenging to arrange times to rehearse for recording sessions. Fortunately everyone in the band is very accommodating.

What were the rewards?
Spending time working on original music with friends is extremely rewarding. The positive response to the album has also been very satisfying.

What has the response been like so far?
The response to both the album and our live performances has been incredibly positive. Audiences and listeners have been very supportive.

What makes a good song?
I think a good song is one that connects with people, has a good melody, and tells a story.

Is your creative process more ‘inspirational’ or ‘perspirational’?
I would say it is about 50/50. There are moments when inspiration and creativity come easy, often when you least expect it. At other times songwriting requires hard work and persistence.

Where do you typically perform?
As we all have full time jobs, families and other responsibilities we generally play in and around our hometown of Regina, Saskatchewan. O’Hanlon’s Irish Pub in the heart of Regina is one of our favorite places to play.

What is the response like from audiences?
The audience response has been extremely positive. We have had the fortunate opportunity to perform original music to full venues with engaged listeners.

What does the band have on tap for 2014?
We plan to release the follow-up to our debut album in the summer of 2014. We also hope to participate in a number of summer music festivals.