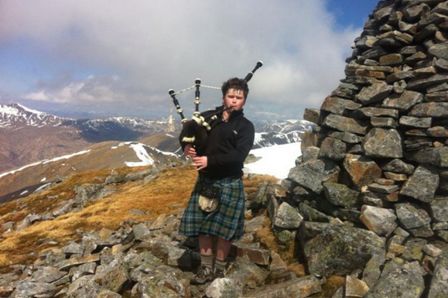 Grant MacLeod is a “Munro bagger” with a difference. He’s not just attempting to climb all 282 of the Munros, the Scottish mountains higher than 3,000 feet, but he’s doing it with a set of bagpipes. When MacLeod reaches the summit of each mountain, he plays.

“I try to play something different on each summit,” he recently told Celtic Life International. “Something apt for the area or the day. For example, on a misty day I played The Mist Covered Mountains and on Ben Lomond, of course I played Loch Lomond.”

Beautiful, yes, even inspiring, but why? is the question. MacLeod, 27, explains that his grandmother provided the original motivation for the challenge. The day before she died, MacLeod came up with the idea deciding he would raise money in her memory for Chest Heart and Stroke Scotland. And when one of his friends passed away from cancer in January, MacLeod also decided to raise funds for The Friends of Beatson in Glasgow in his memory.

To date, some 5,000 people have bagged, or climbed all of the Munros, so named for Hugh Munro, who made the first complete list of the mountains. Whether anyone has previously scaled them all with a set of pipes is doubtful. The highest of the peaks is Ben Nevis at 4,409 feet. But it’s not just the sheer number and height of the mountains that makes ascending them tricky; it’s the danger, too.

The Wikipedia entry on the Munros says while the Scottish mountains may be modest in height, walking and climbing in them can be “treacherous” because of the Atlantic and Arctic weather systems that buffet them. The entry reports, “Even in summer, conditions can be atrocious; thick fog, strong winds, driving rain and freezing summit temperatures are not unusual. Some walkers are unprepared for extreme weather on the exposed tops and fatalities are recorded every year, often resulting from slips on wet rock or ice.”

To be sure, MacLeod has already had his own encounters with the weather. On his recent attempt of Ben More, the Glaswegian sports therapist ended up in a controlled slide down an open part of the mountain. He recorded the moment by building a snowman, adorning it with a kilt and then photographing it along with the pipes.

A more serious moment ensued the first time he encountered snow on Beinn Dorrain. “I was very unprepared, wearing unsuitable footwear, but I carried on. That experience was an eye-opener for me. There were no issues, but I felt very vulnerable and it was a great lesson for the dangers of the hills.”

What with the inherent perils of climbing the Munros, you would think hauling bagpipes along for the trip would be inconvenient to say the least. However, MacLeod says while they are bulky, the pipes only weigh about six kilos and he’s able to break them down and pack them in his rucksack. “It’s always funny to see people watching me take them out of my bag and start playing. Some love it, others don’t quite know what to say or do!” he laughs.

MacLeod first began playing the chanter in school. “Pipers got 30 minutes out of class every week, so I jumped at the chance to get away from my maths,” he recalls. “I found out when I got home that day, that my great-grandfather was a fantastic piper. It really pleased the family, particularly my granny, that I was going to follow in his footsteps.” Now in his second year of climbing and with some 27 Munros done, MacLeod still has a long way to go; suffice to say though, on any given day if he’s not at least on top of the world, then you can bet he’s on top of a Munro.

MacLeod originally comes from Gleneig in northwest Scotland. To train for climbing the Munros, he developed his leg and ankle strength to cope with the uneven terrain. He believes nutrition is one of the key elements of his preparation and uses meal replacement products, which can be mixed with water and which he says provide a full quota of nutrients on the hills.