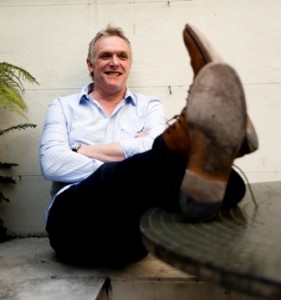 Comedian Greg Davies’ dad so wanted his son to be a Welshman he made his poor, labouring wife travel across the Welsh-English border to St. Asaph from her Shropshire home so that the boy could be born under the Welsh dragon and be eligible to play for the Welsh national rugby team.

“Being born Welsh was incredibly important to my father, he wanted his heritage to live on,” the internationally popular comedian says. “…I don’t know how my mother put up with it, or even said yes in the first place, but it all led to me today being able to say I am a Welshman.”

Davies may not have played rugby for Wales, but the popular performer drew on his father’s influence for his last stand-up tour. “My father was typically Welsh in his conversation and his actions. He held on to the traditions fiercely…When I speak about him in my act, I think I end up painting him as a mental patient, but it was just his Welsh side that made him that lovably eccentric. All my family in Wales are just the loveliest, barmiest people you could meet. They all gave me so much inspiration to work with, and still do.”

Physically, Davies demands attention before he’s said a word; he’s a towering 6’8” tall and his scrunched facial expressions and baritone shrieks helped make him a breakout star from the 2008 British comedy, The Inbetweeners, where he played teacher Mr. Gilbert.

Now, his stand-up tours sell out. His projects include a new BBC panel series with comedian David Walliams and a comedy with Saturday Night Live star Andy Samberg, which will build a bridge to a potentially lucrative US/Canada crossover.

Next up, in sitcom Cuckoo, he plays an overprotective father, enraged by his daughter’s hasty nuptials to an American freeloading drifter. Add to that an autobiographical sitcom, Man Down, which draws upon his experiences as a teacher who hates his job, and there’s no shortage of work.

“Man Down is an interesting one – it’s like looking at the lost years of my life, when I was a teacher, floating along in limbo. It’s an exaggerated version of a period in my life when I felt like a lost soul,” Davies says of the 13 years he spent as a secondary (high school) teacher in southern England.

“In a way, I think we all need to go through those times when we maybe weren’t as happy or as contented as we are now…For most people, regrets will come and go, and there are always things you wish you’d invested more in that you maybe left behind too soon. And I guess I feel like that about Shropshire and Wales. They are fantastic places to be, and coming to the south of England to teach maybe wasn’t worth the compromise.

“Of course, now as an actor and comedian, I can look back on that and say it was worth leaving the place behind, but I get back there as soon as possible, and like all proud Welshmen, I’m pretty vocal in my passion for the dragon.”

Reliving past experiences seems to be the secret to the funnyman’s success. His last stand-up show, the fantastically titled, Firing Cheeseballs at a Dog, took a wry look back at his early days growing up in the small town of Wem in Shropshire.

His new stand-up tour, the equally barmy sounding ‘The Back of My Mum’s Head’, includes anecdotes from his time as a teacher and beyond.

“Firing Cheeseballs was very parent-centric…But I guess now I’ve to come to the realization that I’m actually an adult, and I have to stand on my own two feet… which, of course, is something worrying to admit at the age of 44. But I’ll give adulthood a shot, y’know…” ~ By Stephen Milton