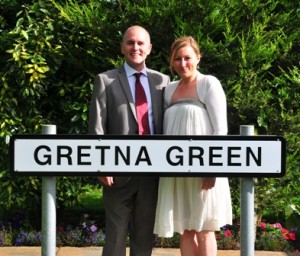 Sara Butler dislikes being the centre of attention and she dreaded the stress of an extravagant wedding. So, when her fiancé Vince suggested they follow tradition and run away to Scotland’s Gretna Green to wed, Sara happily agreed.

The English couple, both in their mid-thirties, live in West Sussex on the south coast of England, but they thought nothing of making the 610km trip to Gretna Green, a village synonymous with romance in the south of Scotland.

“We wanted it to be our day. We decided to do it without family. Other people who marry alone go abroad, to Jamaica or Europe, but I loved the idea of Gretna Green – the whole tradition of running away without anyone knowing,” Sara told Celtic Life.

Gretna Green has been known for romance since 1754 when Lord Hardwicke introduced a law that became binding in England and Wales and that stipulated that those younger than 21 needed parental consent to marry. The law did not apply in Scotland, where boys could marry at 14 and girls at 12.

As a result, young couples began running away to Scotland, and Gretna Green was the first village they reached as they travelled north on the coaching route between London and Edinburgh. Many upper class girls, whose fathers refused to let them marry “beneath” them, fled to Gretna Green, often with their outraged fathers in pursuit.

The first building the young lovers reached was a Gretna Green blacksmith’s shop, and the blacksmith soon got in the habit of stopping work, gathering two witnesses and marrying couples in ‘marriages by declaration’.

“The escapes to Gretna Green made frequent headline news and helped secure the village’s place in history,” explained Susan Clark, the great grand-daughter of the original blacksmith’s shop owner Hugh Mackie. The family still owns what is now the Famous Blacksmith’s Shop and many weddings are held there every year.

In the past, the so-called “anvil priests” would marry a couple for a wee dram or a few guineas, and the hammering of the anvil became synonymous with weddings. Some said that, like the metals he forged, the blacksmith joined couples forever in the heat of the moment.

The wider Gretna/Gretna Green area still hosts thousands of weddings each year in many diverse venues. The anvil forms part of every ceremony, religious or civil, and the tradition is that those who touch the anvil will be lucky in love.

“Gretna Green’s long connection with weddings has endured because of the romanticism attached to the town,” said Graham Smith, General Manager at the Mill Forge, a venue just outside the village where the Butlers wed in September 2012.

Sara and Vince certainly feel that Gretna Green gave them a warm and auspicious start. Staff at the Mill Forge had to assume the historic roles and act as witnesses and take the wedding photographs. “The staff were quite excited,” Sara recalled, “And they were so friendly and lovely.”

Nowadays, of course, most who marry at Gretna Green do so surrounded by family. The village is also popular with tourists who visit to soak up the romantic atmosphere and snap pictures of young couples setting out in life together.

Always keen to avoid being the centre of attention, Sara managed to avoid the camera-toting onlookers.

“It was a very, very special day and, given the choice, I’d do it again and again and again. Gretna Green is beautiful, traditional, quaint and scenic,” she enthused.

The cost was also reasonable as Gretna Green weddings typically cost hundreds of pounds rather than thousands.

“The only thing I had to stress about was telling our families afterwards,” Sara added with a grin, “but they understood and were happy for us.”