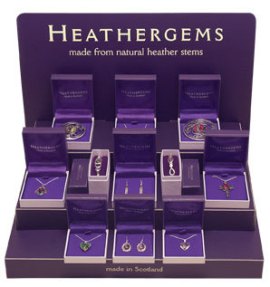 An unusual form of Scottish jewellery and giftware made from natural heather stems, Heathergems make deeply personal presents as no two are ever alike, thanks both to the beautiful toughness of Scottish heather and the unique Heathergems treatment process.

Based in Pitlochry in Highland Perthshire, Heathergems is a Scottish craft business and success story, which is gathering sales and attention around the world after quietly building focus and momentum over more than half a century.

“The finished Heathergems display the natural markings of each individual heather stem, highlighted by the varying shades of the natural dyes,” said Stuart Buyers, Managing Director.

The process of turning heather, that quintessentially Scottish plant, into jewellery and gifts begins when workers collect heather stems from the Perthshire hills.

The heather stems are then dried before being shot blasted to remove the bark.

“The cleaned stems are then coloured with natural dyes. The heather is very hard, so the stems are put in a vacuum chamber before the dye is released. It takes several days for the dye to penetrate the heather,” Buyers said. “The colours never come out exactly the same, which means Heathergems are special to the individual. You are getting your very own piece of Scotland when you buy a Heathergem. That is very important to tourists researching their Scottish heritage and it’s one reason our products sell extremely well to the American market.”

He said that after the dyed stems have dried, they are made into blocks, which are normally composed of two colours. The colours are mixed and soaked in resin before being put in a hydraulic press which squeezes the heather between two moulds at a pressure of up to 80 tons. The compressed block is then left to harden. Later, it is cut to produce the jewellery.

“The individual pieces are cut out on computer-controlled machines to different shapes,” Buyers said. “Each piece is then filled and sanded to a very fine finish before being lacquered by hand. Some pieces are natural shapes like hearts and ovals. Some are inserted into decorative metal settings, the majority made from pewter and silver.”

The full range of Heathergems jewellery and gifts can be seen in many quality gift shops throughout Scotland as well as quite a few stores overseas. Heathergems has a factory shop and visitor centre in Pitlochry and a website where viewers can see and order the products.

The company dates back to the 1940s. At the time, wood was being rationed after the Second World War, and a group of men in East Kilbride near Glasgow started a business making flooring tiles from beech wood branches. The smaller branches were collected and compressed into a block from which they cut flooring tiles. The process was expensive and, as a result, the business did not last. But one of the men involved, Hugh Kerr, a craftsman from Glenlivet, developed the process using heather stems and started making Heathergems in very small quantities in his own workshop.

In 1969, Kerr met Charles Buyers, a Glasgow accountant, who was looking for craft industries to set up in the Highlands as a project for the then Highlands and Islands Development Board, which was seeking to boost employment. The board decided that Kerr’s project was not viable, so Buyers put his own money behind Heathergems.

The original company was established in a small factory in East Kilbride and began producing Heathergems in the spring of 1970. A few years later, it was decided the company should be moved to a more natural home in the Highlands. As a result, Heathergems moved to Blair Atholl in Perthshire in 1979. Hugh Kerr died in 1974 and Charles Buyers in 1992.

Buyers said that Heathergems has had an excellent year with sales well up, despite the recession. “The family put this down to the fact there is so little left that is made in Scotland and many visitors are looking for quality products that are genuinely Scottish,” he said.