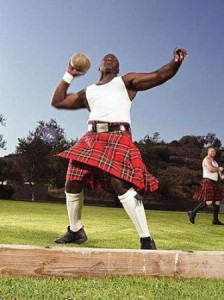 The Heavy Events will be front and center at the Newport Celtic Festival & Highland Games in Oregon this weekend, as competitors put their rugged resolve and sheer strength on display.

Athletic Director, Raymond Mabey, said “we are excited to see more throwers in this year’s event, with over 40 male and female athletes anticipated to compete.” Kilted competitors are sectioned in classes, such as novice, men who weigh less than 200 pounds, women, and seasoned competitors 40 and others. Each must run the gauntlet of the nine separate heavy events. Anyone can sign up on the day provided there is room in their class.

“You need at least five of the traditional events to make up the games,” Mabey said. The events include the Braemar Stone and Open Stone, Sheaf Toss, Weights for Distance, Weight Over Bar, Scottish Hammers and the Caber Toss.

Predating even the Greek Olympic events, and according to the “Book of Leinster,” these heavy events were carried to Scotland with the migration of Celtic tribes from Ireland and lay the basis for the claim that these are the oldest continuing athletic traditions in the world; save one – Japanese Sumo Wrestling.

There are three main goals for the events height, distance and accuracy. The weight over bar and sheaf are height events. The athletes throw the weight and toss the sheaf as over a bar that increases in height. They get three attempts at each height until they miss three times consecutively. The weights for distance (heavy and light), stones (open and Braemar), and hammers (heavy and light) are distance events. The athletes get three opportunities for each. The caber is an accuracy event. The athletes must “pick” the caber upright in their hands, run with it, then stop and throw it. It must turn end over end. A perfect throw ends with the ‘top’ end nearest to the thrower and the ‘bottom’ end pointing exactly away. If the throw is not perfect, it is scored by viewing the caber as though it were the hour hand on a clock. A perfect toss is 12:00.Those that “turn” the caber will then have the opportunity to toss the “Clan MacLaren Challenge Caber” for a $100 cash prize.

The real crowd-pleaser is the sheaf toss event. Competitors must fling a weighted burlap sack of twine with a pitchfork over a crossbar. “Some competitors toss the sheaf nearly 30′! The crowd really likes to cheer on the athletes as they try for personal records,” Mabey said.

Newport’s Highland Games have seen professional and college athletes, former World’s Strongest Man competitors, and this year, a former Olympic athlete from nearby Toledo, Oregon is going to give it a whirl for the first time. At the first games, Toledo, Oregon local and first-timer, Bo Johnson set a field record as a novice thrower sending a 16 pound Scottish Hammer 104 feet which beat the Men’s A category by 2.5 feet.

In conjunction with these heavy events, another traditional Highland Games competition will take the form of the Kilted Kilometer Fun Run which acts as the “Running for Shelter” fundraiser for the benefit of the Lincoln County Animal Shelter. Each year, runners (and their dogs) don their colorful kilts and take to the sand at Newport’s Nye Beach. This year, registration begins at 1:00 and the run will kick off at 2:00pm followed by the Sand Castle Competition at the Nye Beach turnaround.