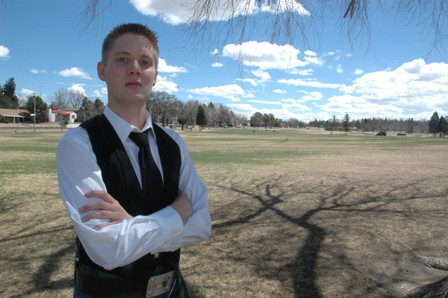 Colorado Springs, with its large military presence, its first responders’ heritage and its Celtic culture, is an ideal place to host a “larger-than-life” show like a tattoo. So, it’s no surprise that the very first Colorado International Tattoo will be held in the city tonight.

“We’re looking to celebrate those military veterans, first responders and their families and it’s going to be a really fantastic tribute,” says the event’s producer and director, Joseph Poch. “In Colorado Springs, we have five military installations – we’re literally surrounded on all sides by a military base. The rich military heritage of a tattoo seemed like a good fit for the city I live in.”

Colorado Springs is also home to the International Association of Fire Fighters (IAFF) memorial, on which is inscribed the names of fallen fire fighters from across North America. Every year, the IAFF hosts a memorial service – this year it happens to be a week before the Tattoo on September 20th  –where pipe and drum bands and honour guards from across the continent participate.

“There’s always been a rich culture of fire-fighter pipe bands and that’s a heritage we share here,” says Poch. “We have had some devastating fires here in Colorado, particularly in Colorado Springs. Two years ago we got hit with a fire which was one of the deadliest wildfires ever that came down over the mountain and actually started spreading through the city. The very next year, Black Forest got hit by some fires. It’s taken a lot for the city to recover from that. We’re on that bounce back.”

Just as Colorado Springs makes an opportune city for the Tattoo, Poch, who has always been immersed in Celtic culture, is a felicitous organizer. For many years his grandparents owned an Irish and Scottish regalia shop. Growing up he played bagpipes, studying under master piper Gordon Speirs, and then went on to Irish dance for 15 years.

As owner of the company Innovative Moments, Poch has been organizing numerous events around Colorado Springs, including the Pikes Peak Celtic Festival and the Colorado Springs Saint Patrick’s Day festivities. He is also an orchestrator and composer, and for several years he was the music director/producer for the Longs Peak Scottish and Irish Highland Festival.

“I went to a school for music and one of my first gigs out of college was writing a fanfare for a tattoo,” says Poch, who’s been working on some new arrangements for the inaugural Colorado event.

During the following week (September 28-October 4) Colorado Springs is hosting the Wounded Warrior Games, so some of those athletes will also be featured in the Tattoo.

“We’re integrating some really different things,” adds Poch. “In Colorado we have a very rich Native American Indian heritage. So how we incorporate that sound with the pipes and the mass military bands has proven interesting but I think it’s going to be a spectacular sound to say the least.”

The inaugural Tattoo is shaping up to be one that will move and entertain everyone, young and old. “It’s a good thing for the whole family to come to,” enthuses Poch. “It will really hit the roots of human nature to listen to music and to enjoy the evening together. People will leave the show awe-inspired. They won’t believe what they just saw with so many people working and performing together.”