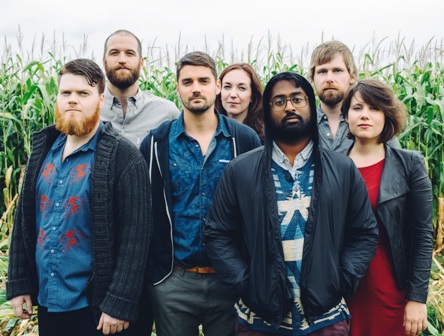 As Newfoundland’s acclaimed indie-rockers Hey Rosetta! wind their way over the wintry landscape of Canada, the band warms the hearts of audiences from coast to coast to coast.

Seven musicians face one another inside an elongated retreat on a secluded seascape off the coast of Newfoundland. Together they cohesively play striking sequences of rhythms and notes and sing such lyrics as Under the pitch and the pull of the moon/Sweet, silver medicines swim in my temples…

This comes from Hey Rosetta!’s video for Soft Offering (For the Oft Suffering) set inside and around one of the Fogo Island Arts studios. The song is one of 12 featured on the Newfoundland band’s latest album, Second Sight.

“They’re sort of these strange alien structures out in the middle of nowhere—even remote in terms of Fogo, which is pretty remote,” says Josh Ward, the indie rock band’s bassist/back-up vocalist, of the art studios on Fogo Island. “It was a really fun process. The hardest part was actually hauling the gear over the bog. It’s a good 20 minute walk from civilization to the studio space.”

The actual recording and production of Second Sight, the band’s fourth album, took place in Montreal’s MixArt Studios. The latest album’s release represents the longest gap between the band’s full-length recordings to date. More time and a bigger budget allowed the band amplified freedom to experiment right in the studio, shares Ward.

“You’d spend a day doing something a certain way and then right at the end of the day the producer, Marcus Paquin, would say, ‘That’s great guys but let’s start again… same idea just do it completely differently’,” Ward laughs. “What used to be the chorus is now the verse, stuff like that. We’d totally mix it up. I think it was a good thing for us to have that possibility because we hadn’t had that opportunity before. I feel like some of the tunes on the record were almost written in the studio. Like with the tune What Arrows, the whole end was kind of created out of a little jam we had in the studio. It was something that was born out of us being able to be in the space and jamming together without a lot of pressure.”

Originally from St. John’s, Newfoundland, both sides of Ward’s family trace back directly to Ireland, a common cultural heritage among Newfoundlanders. He says music has always been part of his life and he has fond memories of sessions breaking out in his family home.

“I was kind of born into it,” he reveals. “My grandmother is quite an accomplished accordion player. All my uncles were in bands in the ‘70s and my mom is actually a great accordion player and singer. I definitely was brought up into it.”

Ward has been a member of Hey Rosetta! since the band formed in 2005. Since then the band has toured across North America, Europe and Australia, won multiple East Coast Music and MusicNL Awards and been nominated for the Polaris Music Prize and JUNO Awards.

“We’ve had some real great opportunities and we’ve been really lucky we’ve been able to do this for a living for the last little while,” says Ward. “It took a lot of years to get to this point of course, but I think we’re pretty happy with what we’re able to do right now.”

Chatting over the phone the day before the band set out on tour across the U.S. with Montreal-based band Stars, Ward said he was pumped to be out on the road again.

“I feel like we haven’t done the real, full-on, get in the van and go kind of tour in a while now, so I’m really looking forward to it,” he beams. “What I do is play music—it’s the thing that keeps me in this…”