Highland Dance in the 20th Century 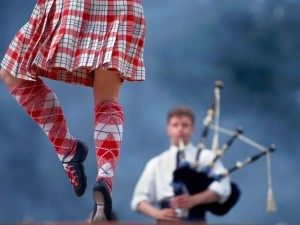 In this third in a series, Dr. Michael Newton of the Department of Celtic Studies at St Francis Xavier University in Nova Scotia explores the history of Highland Dance. This segment looks at Highland Dance in the 20th century.

In previous instalments, I have tried to outline how dance traditions diverged in different communities: this process is particularly well represented by the informal, vernacular traditions of immigrant Gaelic communities in Nova Scotia, on the one hand, and by the formal institutions pressing their authority on communities in Scotland on the other.

At the end of the 19th century and into the 20th, prominent self-appointed dance gurus, such as the MacLennan brothers of Ross-shire, intervened in the transmission of Highland Dance tradition, silently creating new dances and movements without leaving much of a paper trail.

Many people now repeat the common story that the first movement of the dance Seann Triubhas (“Old Trousers”), where the dancer kicks his legs forward, represents the dislike for trousers (which Highlanders had to wear after the Battle of Culloden) and their desire to kick them off. In fact, D. G. MacLennan admitted in his 1950 tract on Highland Dances that he himself invented this movement and that it had no historical basis.

Other dance teachers also reformed styles and techniques. One Gaelic folklorist noted in 1928 that whereas traditional sword dances, performed like other rituals for good luck before battle, would have only been done deiseal (clockwise) in the past, they were now being done tuathal (counter-clockwise), a movement that no traditionally minded Highlander would have considered a good idea before risking his life.

The incremental but relentless appropriation of Highland Dance tradition by non-Gaelic institutions was essentially completed in 1925 when the Scottish Pipers’ Society met in Edinburgh to decide how to define and standardize dances. The dancers in attendance were James Gordon and D. G. MacLennan, who claimed their expertise via the lineage of the deceased William MacLennan. As they announced at the time:

“It is hoped that the committees of all Highland gatherings throughout the country will agree to adopt these rules, which have been arrived at only after very full discussion by representatives from all parts of Scotland and the best known experts, based on the traditions handed down by the best dancers from the day of the late William Maclennan, who was the leading exponent of his time.”

Not everyone agreed with such rules or was willing to defer to the guidelines of the committee, which is not surprising: the very essence of folklife and folklore is variation, and dances had been evolving and developing independently in different communities under different cultural conditions for generations. Judging by the comments of Matthew Hayes, president of the Scottish Dancers’ Association, the Gaels of the western Highlands felt slighted by the monopoly exerted by the Lowlanders of the east and felt that MacLennan’s approach was not representative of their tradition:

“In view of the fact that different styles of dancing prevail in different parts of Scotland taught by teachers as efficient as Mr McLennan, it would be interesting to know upon what authority the Pipers’ Society have determined which is correct. […] As one who attends most of the Gatherings in Scotland, I affirm that McLennan’s style is not the popular one and is not recognised anywhere except on the East Coast. […] To lay down any fixed routine of steps is futile, as every teacher has his own style.”

Further controversy ensued, demonstrating that the imposition of a single competition style was done to the detriment of the diversity and expressiveness of the wider tradition. In fact, one correspondent, A. MacPherson of Sutherland, bemoaned, “Already we have an Association which I am afraid has, to some extent, killed individualism in bagpipe playing, and now we are threatened with a Dancing Association.”

The formation of the Scottish Official Board of Highland Dancing in 1950 – which has since claimed exclusive rights to define dance standards – carried forward an inherently flawed process which introduced non-Gaelic elements, compromised the Highland character of the dance style, and reduced regional and individual variations.

Besides creating a single, athletic competition format, the other major innovation of the twentieth century which has changed Highland Dance tradition has been the domination of female dancers. While I do not wish to enter into the question of whether it was right or morally justifiable to exclude females and children from dance traditions – as was the case with Highland Dance into the early 20th century – it is certainly the case that many proponents of the art resisted such changes. In a very short time, then, Highland Dance went from being an exclusively male art form to being a predominantly female one, with the majority of dancers now being young girls. This cannot but have also impacted dancing styles and repertoires.

Once females began competing in numbers, suitable dances had to be invented, borrowed or adapted for them. Some elements in some of these dances must have existed for some time, even if they have been transformed by new settings and styles.

The “Irish Jig” was previously known as The Irish Washerman and is clearly derived to some degree from the French dance Branle des Lavandieres noted by Thoinot Arbeau (the pen-name of Jehan Tabourot) in his 1589 dancing manual Orchésographie. The Irish Jig probably also owes something to a medieval Gaelic dance known as Cailleach an Dùdain which was a dramatic dance, no longer performed, enacting the death and resurrection of a powerful female character (similar to ritualistic resurrection dramas associated with calendar customs in many parts of Europe).

It would be easy to assume that the dance Flora MacDonald’s Fancy has some significant connection to the Highland heroine of the same name, but there is no evidence that the dance existed before the late nineteenth century. Flora Cruickshank of Peterhead (Aberdeenshire), the woman credited with remembering it and performing it for a modern choreographer, said that she learnt it from her grandfather, who had been a dancing master. She claims that it was originally danced to the tune “I Ha’e Laid a Herrin’ in Salt,” but this was replaced with tunes whose names play up the image of Jacobites and Prince Charles. This is indicative of the way in which “Highland Dance” has been modified to enhance the aura of romanticism around it and make it seem older than it actually is.

It is only after Gaelic tradition has weakened in communities that these “modern” forms of “Highland Dance”, imported from urban Scotland, usually in association with Highland Games or similar organizations, have replaced vernacular Gaelic dances (reels, step-dancing, etc). The Antigonish Highland Society, for example, only called for the hiring of a highland dance instructor in 1921. In Cape Breton, it was the Gaelic College itself that taught and promoted modern highland dance after its foundation in 1938 – but not without provoking smothered resentment and resistance that has persisted to the present.

Reprinted from the Fall 2012 edition of Celtic Life International