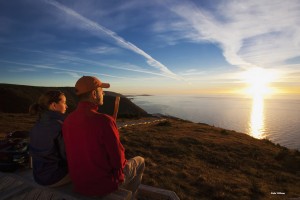 Three years ago, folk singer Taylor Mitchell was attacked by coyotes while hiking alone in the Cape Breton Highlands National Park on Canada’s east coast. Tragically, she did not survive.

Mitchell was horribly unlucky; attacks like this are extremely rare – it was the first such incident in Nova Scotia – and Mitchell’s death should not deter visitors from experiencing the beauty of the area.

“We haven’t had any incidents lately,” says Mariève Therriault, the national park’s visitor experience product development officer. “There are lots of steps being taken to ensure these things don’t happen again”. Therriault, an avid hiker, has yet to see a coyote in the eight years she has been working in the park.

The national park covers 948 square kilometers of the Cape Breton Highlands, a mountainous plateau of rugged, coastal cliffs and lush vegetation stretched across the northern section of Cape Breton Island. Perhaps the scenery – which is reminiscent of Scotland – explains why thousands of Scottish Gaels have settled the area throughout the centuries.

Considered one of the planet’s most picturesque drives, the 298-km Cabot Trail encircles the majority of the Highlands. Tens of thousands drive the circuit each year to experience its sheer beauty. And when the evenings begin to cool in late September or early October, and the leaves turn sizzling reds and golden yellows, the Cabot Trail becomes a true visual feast.

The fall foliage views are even more stunning when you set out on foot into the surrounding wilderness.

“We’ve been trying to encourage people to take advantage of our trails to discover all the treasures that it’s hiding,” says Therriault.

“Franey is one of my favourites.” Therriault exclaims. “You have a view of Cape Smokey, the Middle Head Peninsula that goes out into the Atlantic Ocean, and the Clyburn Valley. It feels like you’re standing on the edge of the world.”

There are also dozens of hiking routes outside the national park, accessible via the Cabot Trail. For example, the North River Falls Trail, a 25-minute drive from the Gaelic College in St. Ann’s, showcases the largest waterfalls in all the Maritimes.

Native Cape Bretoner and avid outdoorsman, Jason McNeil, describes the 19-km hike as a huge challenge, but well-worth the sweat.

“Once you make it through the old forest, the hike becomes increasingly more difficult as you wind your way through more mountains, scale riverside cliffs and nervously cross old hand-made bridges,” he relates.

“The mighty 32-metre North River Falls is a truly breathtaking sight…I always feel an unexplainable serenity when I am in these woods. Time it with the leaves changing during the fall for an extra mind-numbing experience.”

Nearby, in the village of Indian Brook is Cabot Shores, a wilderness retreat owned by Dr. Paul Weinberg and his wife Barbara.

“We teach people where the good trails are off the Cabot Trail, and sometimes we will actually guide them on those trails,” says Dr. Weinberg.

There are several public trails nearby that glimmer and shine during autumn, including the Indian Brook trails that Dr. Paul and members of the local Mi’kmaq community created.

The Weinbergs are passionate about the therapeutic benefits of outdoor recreation, and they have guided hikers from six to 91 years old and hosted retreats for groups like Young Adult Cancer Canada.

Tom C. Wilson, chairman of the annual Hike the Highlands Festival, sees another benefit of hiking in the region – the camaraderie.

“The festival is a physical activity but it’s also a social activity,” shares Wilson. “Every year when we have our first hike of the festival, you’d just be amazed at all the hugs.”

This year’s gathering ran from September 14 to 23, and offered participants a choice of 26 guided hikes around the Highlands.

Another festival that offers hikes is the popular Celtic Colours International Festival, which runs each October. Many of the venues, showcasing music and art from local and international Scottish, Irish, Acadian and Mi’kmaq traditions, are located around the Cabot Trail. You would be hard pressed not to find a route close to each of the host towns, so attendees can easily enjoy the colours alongside the Celtic cultures. Additionally, Parks Canada will be guiding festival hikes the mornings of October 9 and 11.

“If you pack it in, pack it out,” he adds, noting that even biodegradables, like apple cores, should be carried out since they could potentially attract wildlife to frequented trails.

The safest way to avoid dangerous encounters with wildlife, Wilson says, is to hike in groups. If you decide to go hiking alone for a soul-searching experience, be aware of Parks Canada’s guidelines on dealing with moose, black bears and coyotes. (Guidelines are available on their website, in brochures and on signs throughout the park). Should you come face-to-face with a bold coyote, stand your ground and never run, recommends Therriault.

In all likelihood, however, your hiking experience within the pristine environs surrounding the Cabot Trail will be fun and fulfilling, especially this time of year.

“Sometimes it feels like you’ve just plunged in paint, it’s so surreal, the colours are so vivid,” shares Therriault. “We are so spoiled with all the hiking trails. I’ve been here for eight years and I’m still in awe of the place.”

Celtic Life International
Lone Shieling /0.6 km / northern side of the national park
The Lone Shieling, surrounded by rare, old-growth forest, is set within the Grand Anse Valley, renowned for its striking autumn colours. Children of all ages will be delighted when they come across the traditional Scottish crofter’s hut.

Mariève Therriault
Franey / 7.4 km / eastside of the national park
The Franey trail is a challenging climb up to an elevation of 430metres. At the top, enjoy a stunning, 360˚ view of the Clyburn Valley, Cape Smokey and the Atlantic Ocean.

Roland Coombes
Salmon Pools / 12.2 km / westside of the national park
Follow a relatively level path alongside the Chéticamp River which is bordered by 400-metre tall canyon walls. The autumn leaves are particularly vibrant along this trail.

Cara Palmer (Inverness County’s Physical Activity Strategy Coordinator)
Fishing Cove / 12 km or 5.7 km /north-west corner of the national park
Descend steadily down the mountain to a pristine cove where whales are often sighted.  Set up camp for the night on one of the wilderness platforms before the climb back up.

Tom C. Wilson
Pollett’s Cove / 18 km / north of Pleasant Bay
This day-long hike takes you through stunning coastal landscapes and is balanced between climbs and flat terrain on the way into the cove. Michael Haynes, author of Nova Scotia and Cape Breton Hiking Trails, has said this is his favourite.

Cabot Shores
Indian Brook Trails / Village of Indian Brook
Trails on either side of the Indian Brook were constructed by the owners of Cabot Shores and the local Mi’kmaq community. The public trails start at Cabot Shores’ property and guide hikers through the colourful autumn woods where they will see three spectacular waterfalls.

Visitors
Skyline /7.5 or 9.7 km /west side of national park
The Skyline is the national park’s most popular trail and is hiked by approximately 26,000 visitors per year. Hikers can park their car near the top of the mountain and walk an almost level trail to a wondrous view of the Gulf of St. Lawrence.

Jason McNeil
North River Falls Trail / 19 km / outside St.Ann’s
This challenging backcountry trail takes you to the Maritimes’ largest waterfalls. The forested terrain is gorgeous during the fall and is known for a diversity of wildlife sightings.