HISTORY OF THE ANTIGONISH HIGHLAND GAMES 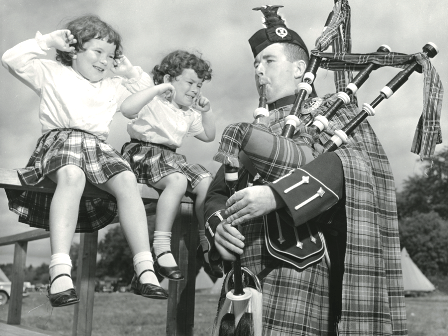 This weekend marks the 152nd anniversary of the first Antigonish Highland Games.

The Antigonish Highland Society first officially sponsored the Antigonish Highland Games on October 16th, 1863; there is however, evidence of highland games being hosted in Antigonish on an informal basis before 1863. Events included foot races, piping, the Highland Fling competition, as well as traditional Scottish heavy events. In 1868, the competitions were expanded to include hurdle races, archery, and the reel and sword dances. At the time, these were exclusively male pursuits.

In the late 1860’s, when the 78th Highlanders were garrisoning at the Citadel in Halifax, they travelled to Antigonish to take part in the highland games and, as such, were the first pipe band to ever participate.  They had taken the train as far as New Glasgow, and then marched through the woods with wagons to Antigonish.

The Antigonish Highland Games traditionally occurred in August after the hay was cut and initially had an aspect of an agricultural fair as well. Remarkably this paralleled with the development of the first highland games in Scotland which eventually split to form the Inverness Northern Region and the Royal Highlands and Islands Agricultural Fair. In Antigonish, this event formed not just the Antigonish Highland Games but the Eastern Nova Scotia Exhibition as well.

By 1880, the County of Antigonish had entered into a prolonged period of recession accompanied by a decline in population. Thousands of young people emigrated to the “Boston States” and to western Canada. The difficult economic conditions and resulting population decline had a deleterious effect on the Antigonish Highland Games, as both attendance and participation declined during this period of time. Even with the attraction of Boston Marathon Champion Ronnie J. MacDonald, a native of Heatherton, AntigonishCounty, the 1899 Games attracted a mere 600 spectators. With the outbreak of the First World War, the Antigonish Highland Games were suspended, and the records are not clear of the exact number of years of this hiatus.

In 1919, a new and determined Antigonish Highland Society executive and membership revived the Antigonish Highland Games. During the 1920’s, the Antigonish Highland Games witnessed a generation of exceptional athletes, led by Dan R. Chisholm (later Rev. “Dempsey” Chisholm) ofOhio,AntigonishCounty. They were held at the old Elm Grounds (between St. Andrews St. and the railway right-of-way) and occasionally at the College Track (near the present Bauer Theatre on the campus of St. Francis Xavier University). Following the 1920’s, the Games were held  at what is now the Exhibition Grounds on James St. until the early 1950’s, and then moved to Columbus Field, the present venue.