History of the Clan System Part 2 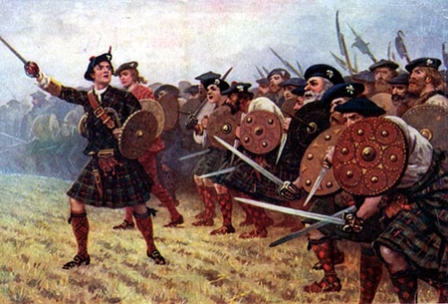 Glencoe left a sour taste in the mouth of many highlanders.

This was made even more bitter by England’s betrayal of their Scottish neighbours during the Darien Venture and the outrage at the 1707 Act of Union could only make matters worse. By the time George I succeeded in 1714 relations were at an all time low. Indeed the succession to the crown of England which began Hanovarian rule was the result of an Act of Settlement signed in 1701. A Scottish parliament however had never acceded this act and support was still strong for the Stewart line. Supporters of the Stuart cause were called ‘The Jacobites’.

The 18th Century say a tremendous period of unrest in Scotland; Many clans such as the MacGregors found themselves outlawed and their most famous son Rob Roy MacGregor was hunted across the country. A first attempt to forcibly re-establish a Jacobite King in 1715 finally ground to a halt after the Battle of Sherriffmuir. James Francis Edward Stewart, “The Old Pretender” Who would have been James VIII was a melancholy and ineffective leader, the jacobite cause would need a more courageous and inspiring one. The found these qualities in his son Charles Edward Stewart – ‘Bonnie Prince Charlie’.

Charles inspired the men of the highlands and impressed the women, he was altogether a more heroic and more dashing figure than his father. During 1744 and 1745 he had been in Paris trying to summon the support for a French armada to invade Britain, this support was never forthcoming so he decided to invade anyway – by himself!

He landed on Eriskay in the Western Isles in 1745 and was politely advised to go home, his reply in typical fashion was ‘I am come home’. From there he gathered support from the Highland clans and the Second Jacobite Rebellion (or the “45”) began with the raising of the standard at Glenfinnan.

The march to London began and support for the cause from the Highland clans increased with a memorable victory at Prestonpans. As time wore on though, and despite reaching as far south as Derby, The moral in the Jacobite camp was waning. The Highlanders were homesick and tired and many began to return home. Charles was forced to turn back and after defeat at Falkirk the final shattering blow was dealt out on Culloden Moor in 1746.

The aftermath of Culloden was shocking. Reprisals were swift and bloody.

The leader of the Hanovarian troops the ‘Butcher’ Cumberland gave no quarter to the Jacobites and legend has it that the order for this was written on a playing card – the 9 of diamonds – This card has subsequently been called ‘The Curse of Scotland’. Charles was hunted by the government and evaded capture by seeking protection all over Scotland, He eventually fled to Europe to face his own gradual decline.

It was clear that Scotland and the Jacobite cause were inextricably linked. Any symbol of Scottish culture was a symbol of Jacobite defiance and this had to be eradicated. The playing of the pipes and wearing of tartan was prohibited and punishable by imprisonment. The highlanders right to bear arms was limited, and the clan spirit was all but broken. By the time the Disarming Act was repealed in 1782 the damage was irreparable. Many traditional skills were lost and the clansmen who had returned to their crofts with tales of defeat in battle were broken and disillusioned.

The Highland Clearances in the 18th and 19th Century seemed to be the final blow in the destruction of the Clan system. However, what became clear as the Highlanders were forced from their native land was that a system so rooted in the traditions of kinship and the family unit would never be wiped out so easily. If anything the Highland Clearances brought a regeneration to the clan system.

As the settlers spread throughout the ‘New World’ the clan became the cement that bonded them together, The formation of the Highland and Islands Immigration Society in 1846 helped open up areas in Australia and New Zealand. The great spread of ‘Jock Tampson’s Bairns’ had begun. The very which had threatened to destroy the clan system turned it into a World-wide phenomena.

The 19th Century also saw a romantic revival in Scotland. Publications of Gaelic poetry became popular and the state visit of George IV was an event totally stage managed by Sir Walter Scott. Clan gatherings and parades were organised for the visit with every clan in its own tartan. An almost fanatical resurgence in interest in all things Scottish left Weavers and Kiltmakers exhausted. Hundreds of new clan tartans suddenly appeared and were distributed to the Clans on an arbitrary basis.

Beyond this Queen Victoria’s love affair with Scotland (and allegedly one Mr Brown!) had resulted in a steady little industry. As a tourist destination Scotland was seen to have an unashamed beauty and the romantic notion of the Scottish Clans added to the Myth. Today Clan Societies abound and the Clan Chiefs reside all over the world.

The Lord Lyon, an appointed officer of state and member of the Royal Household holds authority in all matters heraldic, Genealogical and armoric. Peace between the clans is assured by the Standing Council of Scottish Chiefs.

The Clan societies operate much as they always have, as guardians of the traditions and welfare of their people. No other society springing from such a prehistoric source can be said to hold this modern age together with such a sense of compassion, such pride and unfathomable brotherhood.