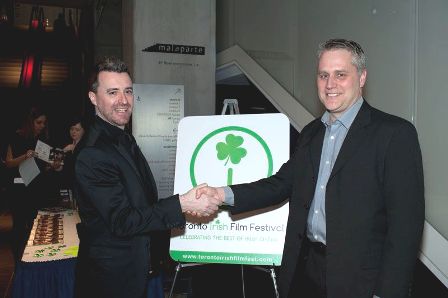 The Toronto Irish Film Festival brings the best in cinema from the Emerald Isle and elsewhere to central Canada. Laura Jayne Mackay fill us in on the festivities, which begin tomorrow night.

From its first screening in 2010 with the Canadian premiere of The Yellow Bittern: The Life and Times of Liam Clancy, the Toronto Irish Film Festival (TIRFF) has grown to feature over 20 Irish films three years later. Of those, 15 constituted Canadian premieres. Now the TIRFF is gearing up to celebrate its fifth year in 2014 at the Tiff Bell Lightbox. The program has yet to be announced, but at the time of writing was calling for submissions for its 2014 celebration of Irish film, something that makes the festival unique within Canada.

An Irish film festival, you wonder? Is there much call for that sort of thing? Well, yes, as it turns out.  Ireland’s reputation for excellent filmmaking has not only existed, but excelled, for many years. Such fine examples of the Irish film-making sensibility may be found in such movies as 1952’s The Quiet Man, a romantic comedy that earned John Ford his fourth Academy Award for Best Director and another for Best Cinematography.

Other outstanding examples of Irish cinema include Neil Jordan’s 1993 film, The Crying Game, which netted the director the Oscar for Best Original Screenplay; and father and daughter team, Terry and Oorlath George’s The Shore, for which they won an award for Best Short Film (Live Action) in 2012.  Ask TIRFF’s Michael Barry (who along with John Galway founded the festival in 2009) what makes the Irish so adept at movies and he’ll tell you: “As a culture, storytelling is in our blood, so it makes sense that we can create amazing films.”

Each year, while searching through TIRFF submissions, Barry is pleasantly reminded that “The Irish sensibility for compelling stories, interesting characters and impressive production values, are second-to-none.” The same could be said of the audience. Since the festival began Toronto’s Irish community has grown, yielding a potential audience of over 250,000 of Irish descent, in addition to the several million other people living in the city. Certainly, selling out screenings at all four festivals to date suggests the interest is solid.

Beyond that, the festival supports the city’s Irish community. TIRFF works in partnership with the Irish Canadian Immigration Centre and has created a new arrivals volunteer initiative. The project connects new members of Toronto’s community with those who have lived in the city for decades, providing new immigrants with support and the ability to network, while keeping the Irish community united.

When it comes to working in film, Galway and Barry have some experience, to put it mildly. Galway is currently president of the Harold Greenberg Fund, the funding arm of Bell Media.  For his part, Barry works as director of content operations and content development at Cineplex Odeon. Both have connections to Belfast: Barry was born and raised there, while Galway is the son of a Belfast man.

When Galway and Barry founded the festival, it was with the intent of creating an annual event that would celebrate the best of Irish cinema. They’ve succeeded in that and then some: TIRFF has continued to grow and showcase a wide variety of Irish cinema. After the sold-out screening at Innis Town Hall of The Yellow Bittern in 2010, By March 2011 the festival was presenting Oscar-nominated films The Secret of Kells, Granny O’Grimm’s Sleeping Beauty and Give Up Yer Aul Sins.  In 2012, TIRFF offered up 11 Canadian premieres of the best Irish cinema available.

One of the Highlights from the 2013 festival was the debut feature from Gerrard Barrett, Pilgrim Hill. Despite being shot on a limited budget, the film’s raw realism and moving filmmaking earned Barrett the IFB Rising Star Award at last year’s Irish Film and Television Academy Awards. Barrett’s recognition shows that Ireland’s high standards of filmmaking are still being met; nor is this going unnoticed at the Toronto Irish International Film Festival.

So what can we expect from TIRFF in the future? With the full line up for the 2014 festival to be released early in the year, a lot of energy and excitement surrounds TIRFF at the moment. One thing is certain: with the outstanding quality of the previous years’ efforts, the audience continuing to multiply. The dedication from its directors to constantly strengthen the festival both operationally and financially means we can expect the absolute best of Irish feature film, documentaries, short films and music videos to be represented in years to come.