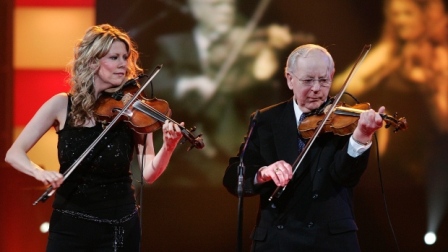 He was known as the Judique Flyer, King of the Jigs and the Godfather of Cape Breton fiddling. Largely self-taught on his instrument of choice, he was nonetheless world-renowned for his ability to bring a fiddle to life. He’s influenced several generations of fiddlers including some of the most important playing today such as Ashley MacIsaac and his own niece, Natalie MacMaster.  And hardly anyone knew him by his given name anymore: Hugh Allan MacMaster. Almost everyone just simply called him Buddy.

Buddy MacMaster has long been known as a master of the Cape Breton fiddle style, but what exactly does that mean? Speaking to the Halifax Chronicle Herald earlier in 2014, Natalie MacMaster told the newspaper that MacMaster reworked pieces from the Scottish canon or lesser-known works and gave them a distinct personality. Younger musicians such as MacIsaac were quick to pick up on MacMaster’s flighty bow work and quick grace notes, Natalie told the reporter. She cited his timing and his ability to find the best groove. “He has this swing in his music that made them call him the King of the Jigs….”

That swing, that groove, are undoubtedly what prompted the prestigious Folk Alliance International to present MacMaster with its lifetime-achievement award earlier in 2014. The award placed MacMaster in an illustrious group including the likes of Woody Guthrie, Pete Seeger, The Carter Family, Mavis Staples, Bob Dylan, Joan Baez and Stan Rogers. Natalie told the CBC that her uncle, who will turn 90 later this year, would be grateful and proud to receive the honour. “This doesn’t define Buddy,” she said. “He’s already been defined.”

MacMaster was born in 1924 in Timmins, Ontario, where his father was working as a hard-rock miner.  A few years after he was born, his family moved back to Judique, Inverness County, along Cape Breton’s western coast. That’s where he grew up, surrounded by the language, culture and music of his well-rooted Scottish ancestors.   The family contained seven other siblings, all born in Cape Breton. And while it may have been written Hugh on his pay cheques and in the phone book, almost every person who knew him simply called him Buddy.

On stage, MacMaster was always well-dressed, in good cheer and doing his best to present a memorable performance. He was equally comfortable playing before thousands of people at a large concert at Edinburgh Castle as he was playing for a small local school fundraiser in Port Hood, but he was most at home playing for a square dance, where the lift and drive of his playing (coupled with his precise timing) could move the dancers like few others. MacMaster used to say that he would feed off the energy of the dancers and often that’s what he needed to carry him through a long evening of playing after an equally long day at work.

At an early age I was familiar with him and his music. After all, MacMaster was “the best” in my father’s eyes, which meant a lot in my youthful opinion. At that time my father was in charge of arranging the music for the dances in the Creignish Hall and he was thrilled when MacMaster was booked to play. MacMaster would set up the big bull horn that he used as a sound system, resting it on a chair at the edge of the stage or on top of the old upright piano, tune up his fiddle, run the rosin along the bow and be good to go.

In those days one of his younger sisters, who lived further up the road in Port Hawkesbury, would provide accompaniment, most commonly Betty Lou, but sometimes Lorraine. Occasionally a guitarist would join this combination. Sometimes it was John Allan Cameron who would have hitchhiked over from Antigonish where he attended St. Frances Xavier University. There would usually be a prompter as well.  A similar line-up appeared on a very regular basis all around the southern part of Inverness County for years.

MacMaster also made regular appearances for dances, weddings, funerals and concerts in countless other communities around the Island, and he also made a few trips each year to areas across North America where Cape Bretoners had settled in numbers such as Halifax, Toronto, Hamilton, Boston and Detroit. All this time he was still working a full time job for CN as a telegraph operator and station agent in different communities around Cape Breton and the mainland of Nova Scotia.

While he was certainly one of the most popular fiddlers for dances and equally at home on the stage for concerts, it was not uncommon for people to plan their weddings or anniversary celebrations to coincide with MacMaster’s availability to play at the reception or at the church.  Similarly, the Judique fiddler’s promised appearance would mean extra revenue at the door for any concert.

Even with his daunting performance schedule MacMaster was always an active person in his church and in his community, serving several terms on the Inverness County Council in the 60s and 70s.  In 1968 he married Marie Beaton and subsequently had two children. Mary Elizabeth is a noted pianist and Allan is currently the elected MLA for Inverness in Nova Scotia’s Legislative Assembly.

As the years progressed Buddy’s reputation as a player spread and he was invited to major festivals across Canada, the United States and overseas. He became a regular on the CBC TV show Ceilidh.  Later he became a member of The Cape Breton Symphony, a quartet of fiddlers which appeared regularly on John Allan Cameron’s TV show and  continued to play and tour together for many years. He even had the distinction of playing the national anthem at a baseball game between the Boston Red Sox and the Detroit Tigers in June, 1997.

Buddy also became a mainstay at many of the major music camps worldwide, passing along his vast knowledge of the technique of Cape Breton-style playing to eager students in places like the American Fiddle Tunes Camp in Port Townsend, Washington, and the Valley of the Moon Scottish Fiddle School in California, as well as doing workshops in Scotland and Ireland. Closer to home he taught at the Gaelic College in St. Ann’s, the Ceilidh Trail School of Celtic Music in Inverness and the regular music school (named in his honour) that happens every year at the Celtic Music Interpretive Centre in Judique.

Many of the current fiddle players have learned from this man, in person or by listening to him perform on stage or at dances. Some picked up his technique by listening to his music on recordings. If you could learn a “Buddy tune” and play it like him, you had accomplished something. Perhaps the person he most influenced is his niece, Natalie MacMaster.  She grew up surrounded by music and by Buddy’s playing in particular.

During his long career he received many accolades for his music ranging from his four solo recordings and his duet recording with Natalie, to extensive music industry and community recognition. The latter include a Lifetime Achievement Awards from the East Coast Music Association, induction into the Scottish Traditional Music Hall of Fame, the Order of Canada and the Order of Nova Scotia, and honorary doctorate degrees from both St. Francis Xavier University in Antigonish, and Cape Breton University in Sydney.

Canadian Senator Terry Mercer summed up MacMaster’s career and wide-ranging influence nicely when he stood in parliament to congratulate the musician on his Folk Alliance International Lifetime Achievement Award. Calling MacMaster, the “Dean of Cape Breton fiddling,” Mercer said, “Honourable senators, some ways in which a culture proudly shares itself with people include the written word, voice, dance and music. For Cape Breton, the finest example is through its music.

Celtic Life International would like to extend our deepest sympathies and condolences to the MacMaster family.