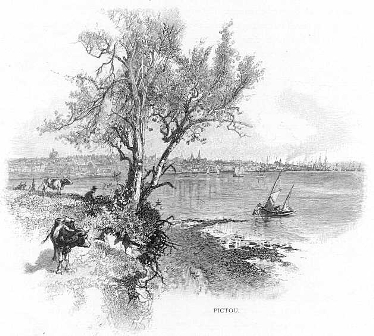 Genealogist Allen Robertson helps many Canadians unearth their family trees. Here, he reveals the complex trail that led to an impressive citizen and pioneer — Hugh, the Soldier Munro.

Standing in the Laurel Hill Cemetery in Pictou, Nova Scotia, on Canada’s east coast, is a sandstone monument with elegantly carved script that reads: In memory of Hugh Munro who parted this life on the 17th October, 1836 aged 68 years. He was a native of Croy – Nairn Shire Scotland a kind husband and a dutiful parent.

Recently, Hugh’s descendants set out to uncover their progenitor’s past. Research revealed that his sons included William and Alexander, the latter a shipwright. Grandsons included sailmakers, master mariners and sailors. One grandson, Hugh the Sailmaker Munro, went on to own vessels and become Harbour Master of Pictou.

The first clue to Hugh the elder’s life was found in the 1867 provincial death certificate of his son, Alexander Munro. Curiously, it gave the birthplace not as Scotland but rather Dublin, Ireland, in 1805 (a date that should have been ca. 1802). His parents were listed as Hugh – a soldier – and Margaret Munro. Alexander’s Laurel Hill tombstone repeats the same information. This record meant that the family arrived in Nova Scotia no earlier than the year of Alexander’s birth. In the Nova Scotia Archives are two petitions, dated 1818 and 1826 respectively, by Hugh Munro. He described himself as,  a native of Crowey (sic) County of Nairn Scotland, and recently emigrated to East River of Pictou (the 1826 petition gave the year 1817) and, served five years in the Highland Regiment of Fencibles – later corrected to seven years.

The original 1818 petition went on to state that he had served his majesty in the Duke of York Highland Regt. of fencibles seven years & _- months – has a wife and 5 sons the oldest aged 21 years the second aged 19 years is married your Petitioner emigrated to this province last autumn.

The fencible regiments were created in response to the French Revolution and the later rise of Napoleon. Many of these were required to serve in Ireland before and during the 1798 Rebellion. The fencible unit Munro served with was at first called the Loyal Inverness Fencible Highlanders, a kilted regiment, which was stationed at various places in Ireland. It was renamed in 1801 as the Duke of York Royal Inverness-shire Highlanders for offering to serve elsewhere as needed, then disbanded in August 1802 at Stirling.

Hugh the Soldier Munro has been traced to the parish of Croy and Dalcross. He and his wife Margaret McIntosh had their first children baptized at Cawdor in Nairnshire, including William White Munro. Their son Alexander, as noted, was born during the Irish sojourn, at a time when families travelled with the soldiers’ regiments. At some point after 1802, Hugh Munro moved his family to South Leith at Edinburgh. It is assumed that here William was apprenticed to learn the sailmaker’s trade while Alexander became a woodwright. Sons James and John Hodson were baptized in the parish church there.

Leith, an important fishing port, was beginning to participate in the trans-Atlantic trade, including the transportation of emigrants to British North America. The work of author Lucille M. Campey, advertisements in the Edinburgh Advertiser, and Hugh the Soldier Munro’s petitions indicated that the decision to emigrate was taken in 1817 by way of passage on the ship Scotia, described in the Advertiser of July 1 as “a fine, copper-fastened vessel of 400 Tons burden ready to take on goods and passengers for sailing on the 12 July…”  One next hears of the Scotia arriving at Halifax, Nova Scotia, on September 8 with 120 passengers.

Hugh the Soldier Munro arrived at Black Rock, Upper Settlement of East River and up-river from where the community of New Glasgow was destined to become an important ship building centre. Across Pictou Harbour, lay the bustling trading town of Pictou where there was constant shipping traffic and ship building. Hugh’s sons William and Alexander were listed in the 1838 Census at Pictou, and Hugh followed them when he retired from his pioneer farm.

Hugh was a determined settler. He brought under cultivation 20 acres, built a house and barn, all within eight years. He survived the vagaries of army life, the bold adventure of an Atlantic crossing and set his family on the way to becoming stalwart Pictou citizens. This “kind husband and dutiful parent” can be remembered in words from Alexander’s own tombstone that speak of another crossing: A few short years of evil past we reach the happy shore where death divided friends at last shall meet to part no more.