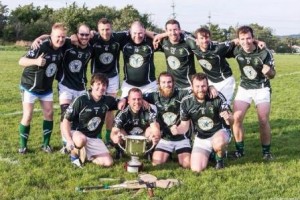 It may be an integral part of the Irish identity but the ancient sport of hurling is just catching on in Halifax, NS, thanks to the enthusiastic efforts of a bunch of ex-pats.

The Halifax Gaels, with players from Kilkenny, Kerry, Cork, Waterford, Clare and beyond, have pulled a few locals – including some born of Irish parents – into their ranks and will return to the pitch in May. The highlight of their season will be hosting the Eastern Canadian Gaelic Athletic Association (GAA) Championship in September.

“Sports, entertainment and culture are all part of same package in Ireland and that’s what we want to present,” said Halifax Gaels co-manager Colin Dorgan.

An artist, architect and musician from Ballyhooly, a village in the north of County Cork, Dorgan can hardly imagine a life without hurling.

“It is bred into us you see.  All the lads are dragging around hurley sticks from the age of two and can hardly wait to play. Everybody supports the local teams.”

Dorgan admits it was a girl, rather than the prowess of the local hurling club, that brought him to Halifax.

“The truth is I was lured here by a Nova Scotia nurse I met travelling in New Zealand. Learning there was also a hurling team in Halifax was very good news, indeed.”

Hurling has components of soccer and rugby as well as lacrosse and hockey, according to Dorgan.

“It is fast with a lot of running but it is not as tackle-oriented as rugby. Unlike soccer, you have to wear a helmet because it is a physical game but nobody is out there to maim anyone.”

The origins of hurling are said to be prehistoric, with official sanction from the GAA since 1885. The object of the fast-paced game, simply put, is to use a wooden stick, known as a hurley, to hit a small ball called the sliotar, into the opponents’ H-shaped net. The sliotar can be hit along the ground, into the air or carried for short distances and, like all games, hurling has a list of rules. It also has a lot of fans as an Irish national championship match can attract more than 80,000 spectators, most of them waving their team’s colours.

One of the greatest rivalries in Irish hurling is between County Waterford and County Cork so it was fitting that Brian Walsh, of the former, and Ciaran Faherty, of the latter, were among those ex-pats who met in a bar to organize a Halifax team in 2012. They began training, held a few demonstration games and agreed to call themselves the Gaels. By the time the first Eastern Canadian GAA championship took place in St. John’s, NL, last summer, they were ready.

“There were teams from St. John’s, Quebec City, Montreal and Ottawa, as well as ourselves. We were short a few players so the competition was tough, but we did all right. We won the hurling and we lost Gaelic football in the final.”

Dorgan said the expats have had to shelve their traditional rivalries to form a united team.

“We all know the lads from Kilkenny are no good, but we let them play anyway,” he joked. “Seriously, though, we need players and they don’t have to be Irish. They just need to be willing to get on the field with a bunch of Irishmen and we’ll teach them to play.”

The Gaels will participate in the city’s Celtic Festival in September. As interest in the game grows, Dorgan predicts matches will take on a festive atmosphere.

“We’d like to see the championship have a bit of the excitement we’d have back home. We’d like to have Irish music and a bit of an Irish market set up to showcase the culture. It is important to preserve and promote the Gaelic games because they are so much part of the culture. Down the road, we’d like to work at getting the sport into the schools.”

While hurling is generally regarded as a new sport in Nova Scotia, it might actually be older than first estimated. Those who contend Windsor, NS, as the birthplace of hockey, credit transplanted Irishmen with adapting the game of hurling for play on frozen waterways.