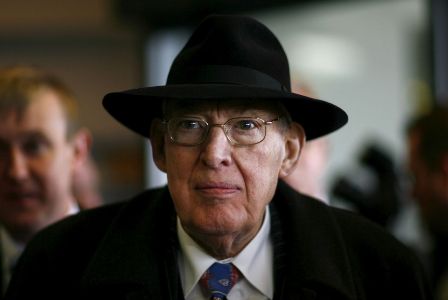 Firebrand is the word most associated with Ian Paisley. As news of the former Northern Ireland leader’s death spread, one after another, the world’s major media released their obits.

“Once a firebrand preacher…” said the Belfast Telegraph. The New York Times called him “Northern Ireland’s firebrand Protestant leader.” The Guardian, in its sub-head to its, story declared him a “DUP firebrand turned Northern Ireland peacemaker.”

Paisley came by his fearsome reputation honestly. To judge the man by his quotes alone showed a fierce personality. He called alcohol “the devil’s buttermilk,” and referred to the Queen as “the parrot of the Labour government.” Famously, he said of Sinn Fein, “I am not going to sit down with bloodthirsty monsters who have been killing and terrifying my people.”

And those were just the relatively innocuous quotes.

Paisley died in mid-September, aged 88. The New York Times reported that in recent years he had been in poor health. In 2011 he received a pacemaker, at which point he also retired from politics.

Tributes poured in – some from odd places indeed. Minutes after the news broke of his death, Martin McGuinness, Northern Ireland’s deputy first minister and one-time head of the Provisional IRA (which once debated internally whether to assassinate Paisley), tweeted his condolences; “Very sad to learn that Ian Paisley has died. My deepest sympathy to his wife Eileen and family. Once political opponents – I have lost a friend.”

Nobel Peace Prize winner and former political opponent, John Hume, told the newspaper: “History will record his political career as a journey – one which took [him] from the politics of division to a place where he accepted agreement as a solution, the need for power-sharing and the respect for diversity –but history will also ask if he should have reached this point sooner.”

Paisley was born in Armagh, Northern Ireland in 1926, the son of a Baptist preacher and a Scottish evangelist. No surprise then that the he was ordained as a minister himself in 1946.

“But he soon came to believe his church had deviated from biblical scriptures and he founded the Free Presbyterians, a relatively small fundamentalist sect,” The New York Times wrote. “The Presbyterian Church, Northern Ireland’s largest denomination, disassociated itself from his anti-Catholic rhetoric.”

The New York Times describes a tumultuous life. In the 1950s Paisley organized vigilante patrols to defend Protestant neighborhoods against IRA attacks. The paper said he lived through “decades of deadly turmoil – bombings, assassinations, clashes with British troops and general strikes and riots he had fomented” as he fought any peace deal that meant the sharing of power with Northern Ireland’s nearly 1.8 million Catholics.

In 1971, he established his own political party, the Democratic Unionist Party, which in the wake of the Good Friday Agreement in 2007 – that ended The Troubles, during which time 3,700 died – saw Paisley join with McGuinness as respectively leader and deputy leader of Northern Ireland. The Financial Times wrote that “Paisleyism was as much a response to the divisions within unionism as it was a reaction to the militancy of the anti-British Sinn Fein party and the atrocities perpetuated by its military wing, the IRA. His was part of a working-class movement that pledged loyalty to the Queen, but not to her ministers and the laws they laid down.”

The paper also repeated a witticism from Maurice Hayes, a former Northern Ireland civil servant, who, according to the Times, wrote in his autobiography: “I have often thought there were about six Paisleys. Two were very nice people. Two were quite awful and the other two could go either way.”