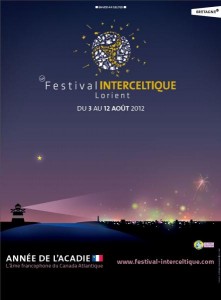 The largest Celtic event in the world – Interceltic Festival Lorient – begins today in Brittany. This year, the 10-day gathering celebrates the sights, sounds and spirit of Acadian culture.

“Acadia is a constellation of words in the galaxy of human languages. We emit unusual ideas; we are the warriors of the imaginary and of compassion. We are always burning amongst the hands of history and stories solicit us with fervour. In us, the unfinished and the future interact, we move amongst the living”. ~ Gérald Leblanc (Acadian poet 1945 – 2005)

A proud and dynamic community, Acadia has a population of some 200,000 inhabitants spread out over the Canadian Atlantic provinces. Since its first participation in the Lorient Interceltic Festival in 2004, Acadia has been able to seduce the public with an ever increasing festive and convivial participation, making a special place for the Acadian spirit in this festival and gathering of Celtic cultures. This summer, over 40 artists will make the long journey to Lorient in order to highlight the vitality and creativity of Acadian culture, in all its disciplines and forms.

The History of Acadia

In the 16th century, European fishermen came to spread their nets in the waters off Newfoundland. These fishermen, originally from Brittany, Normandy and the Basque Country, got to know the Saint-Laurent Gulf and the islands and coast around New Brunswick well. In order to ensure the possession of land in the New World, France gave permission to the illustrious Sieur de Monts in 1604 to establish the first permanent settlement. Gradually, more and more French boats cast anchor here and the first French families migrated to Acadia. The first colonies established in Acadia had to show imagination and tenacity to get by. Very few products were imported from France; therefore, they had to make their living from a very inhospitable land. Over the years, the colonies developed a new type of lifestyle in this place and made Acadia quite prosperous. The customs and culture adapted to this new environment and formed the basis of Acadian identity. From 1604 to 1713, the Acadian colony experienced political upheaval and ownership changed hands between the French and the British seven times. Due to its strategic position and the prosperity of the region, this vast territory was a veritable currency between the French and the English. Acadia was also the site of several battles, culminating in the “Grand Dérangement”, the expulsion of the French-speaking communities from the territory by the British in 1755. These communities were deported to several English colonies in North America and were pursued and chased out of the Acadian territories for a period of eight years. Acadia was practically destroyed but in 1763, it rose from the ashes. However, 1755 will forever remain a date engraved in the collective memory of the Acadian people, a tragic event which served to consolidate ties, despite the Diaspora. In New Brunswick, the Acadians settled mainly along the coast from Cap-Pelé to Miscou and inland as far as St-Jacques, in the north-west of the province. In Nova Scotia, they settled in the Baie Ste-Marie and Cap Breton regions, whereas on Prince Edward Island, they initially established communities in the Évangéline region and in Newfoundland, on the west coast of the province. Quebec also welcomed Acadian refugees. In the second half of the 19th century, schools, convents, newspapers and various associations gave a new energy or lease of life to Acadia. Acadia entered the Modern Age with decisive progress in terms of education, social justice and linguistic rights

The immigrants who crossed the ocean from St Malo to the Falkland Islands, from Nantes to Louisiana, from Belle-Île-en-Mer to Acadia did not travel in vain. The expulsion of the Acadian people did not succeed. Today, Acadians are scattered throughout the Canadian Atlantic provinces, mainly in New Brunswick, the only official bilingual province in Canada, with a population of 300,000: some 300,000 Acadians extremely proud of their roots. Acadian society today is extremely dynamic and boasts its own French speaking educational, cultural, political and financial institutions. The population has successfully preserved their language, culture and traditions. The establishment of Moncton University in New Brunswick in 1963 was an important step in the modernization of Acadian society and has become a veritable beacon of contemporary Acadian cultural and social life.

As with all cultures, music plays a very important role in Acadian society. Before 1850, the primary instruments were the violin, mouth harp, accordion and spoons. The guitar and mandolin appeared later, towards 1860. Square dances and Cotillion dances are accompanied by reels and jigs. Even today, it is not unusual to see the wealth of the Acadian heritage inspire a large part of Acadian musical creation. This festive and joyous spirit has been a collective force, a real method of survival and sharing at the time of the “Grand Dérangement” and is still very much present in everyday life. Acadian tunes are handed down from generation to generation but were often transformed or have evolved over time. Between tradition and modernity, the Acadian repertoire is very varied. Acadia has inspired creativity and is now home to hundreds of nationally and internationally recognized artists. These Acadian male and female performers are inspired by contemporary music and have appropriated new genres. A fundamental medium of its identity, the Acadian culture maps out the frontiers of what has been referred to as “La Grande Acadie”.

All of Acadia is getting ready for what promises to be a very memorable Interceltic Festival. Acadia’s participation in the Festival, its representatives, ministers, entrepreneurs and artists has been turning Lorient heads since 2004! Today, Acadia is a nation, born of a Diaspora that plays a central role in the Lorient Interceltic Festival. Numerous events and surprises await festival goers over the ten days and nights of the Festival!