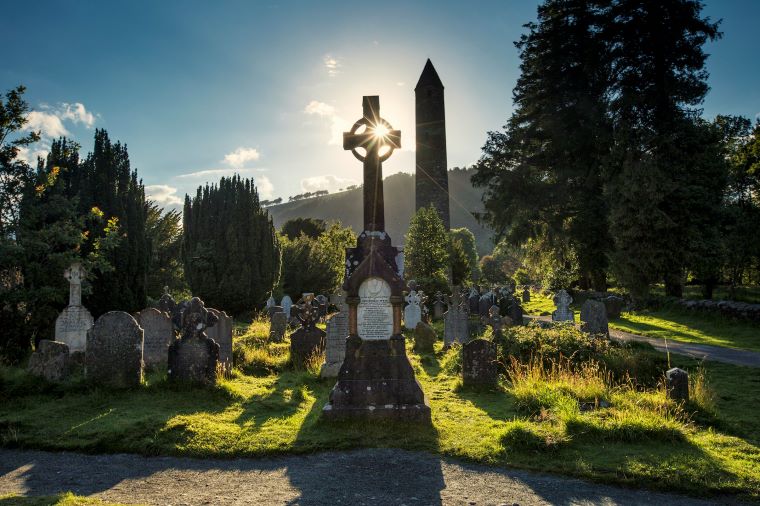 Ireland is a treasure trove of amazing monastic sites and Early Christian artefacts that link to a golden age in the island’s history.

It’s not for nothing that Ireland is known as the island of saints and scholars. In Early Christian times it was home to a wealth of monasteries within which monks created wondrous illuminated manuscripts, taught languages and literature and generated a love of learning, spirituality and the arts that still resonates in the Ireland of today.

One of the most remarkable early monastic sites in Ireland is Skellig Michael. A jagged island lying off the coast of County Kerry on the Wild Atlantic Way, it was chosen by sixth-century monks for their monastery, and their stone-built, beehive homes are an impressive sight. Now a UNESCO World Heritage Site, the island has also gained modern-day fame as the hideout for Luke Skywalker in Star Wars: The Force Awakens as well as starring in The Last Jedi. 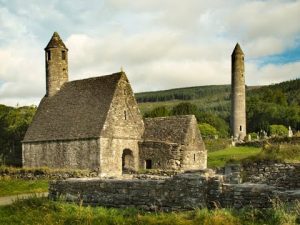 In the stunning setting of Wicklow Mountains National Park lie echoes of a time past in the shape of high crosses, ruined churches and an imposing 33m-high round tower, which still stands intact. These are the remains of the sixth-century monastic city of Glendalough, a jewel of Ireland’s Ancient East.

The Celtic cross is one of the great symbols of Ireland’s Christianity and also evidence of the skill and artistry of Early Christian sculptors. The Cross of the Scriptures at the sixth-century monastic site of Clonmacnoise, County Offaly, is one of the most intricately carved, with figures on all four sides. In County Tyrone, the twelfth-century Ardboe High Cross is engraved with biblical scenes on its west face while the Dromore High Cross in County Down has fretwork designs on its shaft.

But Ireland’s greatest Early Christian treasures are not its ruined churches or high crosses but rather the stunningly intricate and beautifully illuminated manuscripts created by monks, among which the best known is the Book of Kells.

It is thought to have been created around AD 800 and contains the four gospels of the Bible. Housed in Trinity College Dublin – where a special exhibition explains how it was made and unlocks the symbolism within it – it is famous for its lavishly decorated pages and the artistry of its makers.

The Book of Armagh is another of Ireland’s great cultural treasures. Though less ornate than the Book of Kells, it is important for containing the Confession of Saint Patrick, Ireland’s patron saint.

Many other significant Early Christian artefacts are on display at the National Museum of Ireland including the eighth-century Bell of St Patrick and the beautiful Ardagh Chalice.