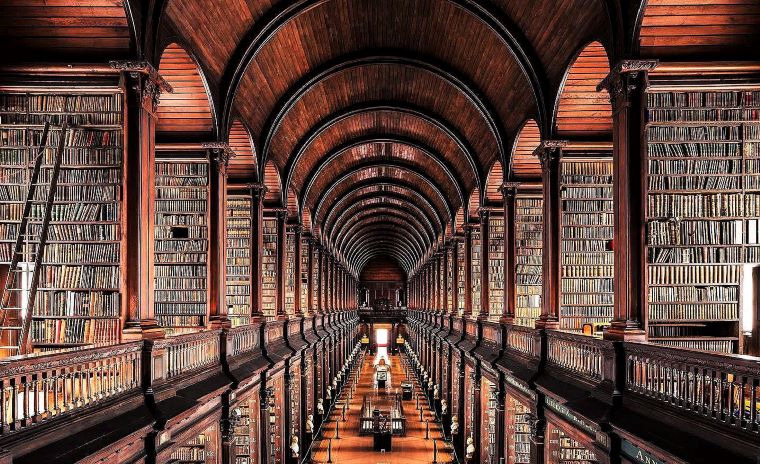 The island of Ireland has an immense literary heritage, and its oldest libraries cherish and celebrate the work of its finest writers. Ireland has always had a love affair with words and its libraries hold the riches of wordsmiths that include four Nobel laureates (Shaw, Yeats, Beckett and Heaney) and several other gigantic literary figures – Joyce, Wilde, Swift, Kavanagh and O’Casey. Here are five libraries every lover of literature should dip into.

The Long Room, Trinity College Dublin
The wonderful barrel-vaulted ceiling, rich wood panelling, wrought-iron spiral staircases and giant frosted windows imbue the Long Room with a Hogwarts-like atmosphere. Part of the university’s Old Library, the Long Room holds 200,000 of the library’s oldest books and is also home to the magnificent Book of Kells illuminated manuscript. The 65m-long room is lined with marble busts and other treasures held there include a copy of the 1916 Proclamation of the Irish Republic and a fifteenth-century harp, which was the model for the emblem of Ireland.

Armagh Robinson Library, Armagh
This classical library was founded by Archbishop Robinson in 1771 to share his collection of books and fine art. The floor to ceiling bookshelves are lined with rare books including valuable first editions, illuminated manuscripts, medieval manuscripts and incunabula (books printed before 1501). Among its treasures is a first edition of Gulliver’s Travels corrected in Johnathan Swift’s own handwriting. Swift was born in Dublin but was a great admirer of, and frequent visitor to, Armagh.

Russborough House library, Wicklow
Russborough House is a gorgeous Palladian mansion in the heart of County Wicklow and boasts one of the finest private art collections in Ireland. Its library is a cosy room with a stunning stucco ceiling and shelves of leather-bound books that can be browsed but not borrowed. Entrance to the library is only available with a ticket to tour the house.

Linen Hall Library, Belfast
Belfast’s oldest library, Linen Hall, dates from 1788 and its collections form an important part of the literary history of Northern Ireland. Housed in a Victorian former linen warehouse, it has a fascinating newspaper collection dating back to 1738 and archives of the work of acclaimed poets Sir Samuel Ferguson, Louis MacNeice and John Hewitt, among others. A wonderful collection of books by and about C. S. Lewis can also be viewed. The Chronicles of Narnia creator had close ties to Belfast and is celebrated in the C.S. Lewis trail in the city.

Marsh’s Library Dublin
Marsh’s Library, situated behind St Patrick’s Cathedral, is a historic Dublin City landmark. It first opened to the public in 1707 and the interior has remained unchanged for more than three centuries. The oak bookcases house more than 25,000 rare and interesting books. The library was a favourite haunt of Jonathan Swift and Bram Stoker.