Irish in the NFL 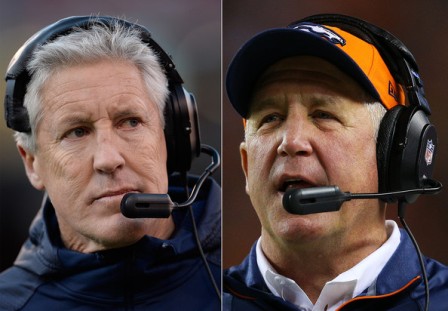 The National Football League is a rich environment for Irish influence. With the Super Bowl taking over the airwaves today – and with both head coaches having roots on the Emerald Isle – it is perhaps fitting that we note the top twenty Irish-Americans in the NFL.

Pete Carroll: Two of his grandparents were Irish emigrants. Ironically he grew up in the San Francisco Bay Area. Did a super job with USC and now has Seattle poised to go win their first Super Bowl.

John Fox: Wily Denver Broncos coach has his team in Super Bowl mode again. Tipperary roots and is a tough old cuss, as he proved when coming back after heart surgery this year.

Tom Brady: “Tom Terrific” three Super Bowl titles and MVP of the big game twice. His roots are County Cavan and he has that fiery Irish temperament that won’t take defeat lightly. Among the all-time greats.

Colin Kaepernick: Biological grandson of Margaret Anne Curran from Cork, though he is adopted. The successor-in-waiting to Peyton Manning and Tom Brady, especially if he wins the Super Bowl.

Tom Coughlin: Former Catholic seminarian from Waterloo, NY. Cagey old New York Giants coach pulled off two Super Bowl victories against all odds. Still one of the best in the business despite a bad 2013.

Mick McCarthy: Took the Green Bay Packers to the Super Bowl winner’s circle in 2010 when they defeated his hometown Pittsburgh Steelers. He holds, arguably, the toughest coaching job in the league given the outsize reputation of Vince Lombardi. McCarthy is always in his shadow. Lombardi would love this working class son of an Irish fireman and pub owner.

Rex Ryan: The ‘Mouth of the South’ has clammed up lately, but is still an outsized personality coaching the New York Jets. He needs a Super Bowl trophy, though, to make his legend last.

Bill O’Brien: Just named coach of the Houston Texans, formerly with Penn State where he achieved a remarkable turnaround. Prior to that he was with the New England Patriots.

John Harbaugh: Brohter of Jim (see above), won Super Bowl with Baltimore last year against all the odds

Chip Kelly: Philadelphia coach had great success in his first year coaching the Eagles. New England native brought his Oregon turbo-charged run and gun style to the pros and it really paid off.

Sean Payton: New Orleans coach Patrick Sean Payton was named after the Irish “Rosary Priest” Father Patrick Peyton. He didn’t need the Rosary, though, to win the Super Bowl in 2009.

Mike McCoy: first season in charge of  the  San Diego Chargers and he led them to the playoffs against Denver and gave Peyton and company a fright. A real comer among new head coaches.

Dan Rooney: Chairman of the Pittsburgh Steelers and former US ambassador to Ireland, one of the true gentlemen of the game who will always be remembered for the Rooney rule which mandated that African Americans be interviewed for head coaching jobs.

Pat Bowlen: Owner of the Denver Broncos, from an Irish Canadian oil  family. He has overseen the Broncos’ march to the top, to be one of the best franchises in the NFL. His decision to grab Peyton Manning will long rank as an incredibly smart move. Bowlen has been a member of the American Ireland Fund Dinner Committee for the past 22 years and a Trustee for the Irish Community Center for 11 years.

Matt Ryan: “Matty Ice,” quarterback of the Atlanta Falcons, brought them to the verge of the Super Bowl in 2012, but lost to San Francisco in the NFC title game at home. A Philadelphia Irish kid, he was a star performer at Boston College in his college  days.

Ryan Fitzpatrick: Tennessee Titans quarterback is a Harvard graduate and allegedly has one of the highest IQ’s among NFL players. He has a mixed record on the field, however, and has become a second stringer after an initially promising start to his career.

Mike Shanahan: Fired Washington Redskins coach had a much happier career with Denver, where he lead them to the Super Bowl in 1997 and 1998. A devout Catholic and a Chicago area Irish kid, his own career ended after a serious collision on the field after which his heart stopped and he was given last rites.