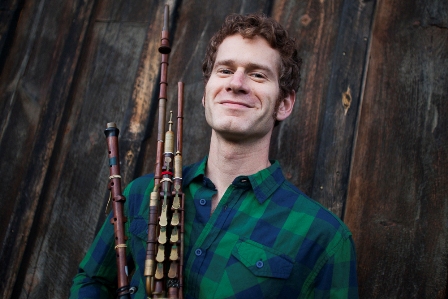 “When I was about 12 years old, I discovered Irish traditional music and there was no turning back. The sound of the uilleann pipes had me completely enthralled.” Meet Isaac Alderson, who performs at Nova Scotia’s ReJigged Festival tonight!

What are your own roots?
I consider myself just plain old American. We all came from the same place if you go far enough back. My recent family history is that my mother’s people came from Poland and Romania, my father’s mother was Swedish-American, and his father’s family have been in the US long enough that I don’t quite know their whole story.

What inspired you to take up music?
My father is a musician, and I grew up listening to him and his favorite records. He plays the harmonica, guitar, keyboard, and saxophone, though I’ve always felt his greatest strength is his voice. He’s a really fantastic singer. I first took up the alto and then tenor saxophone when I was 10 years old. Music was not yet a priority for me, in fact my obsession was hockey! I know that’s rare for an American. I grew up with a fondness for Canada as a result. I hadn’t been exposed to much Irish or Celtic music until I was 13, when I first heard the uilleann pipes. My mom had a friend who played a bit and he fanned the flames of my youthful enthusiasm by loaning me a practice set of pipes and some CDs to listen to for inspiration. Really it was just the sound of the uilleann pipes that got me hooked on Irish music, though I soon learned to love the other instruments as well.

Are they the same reasons you do it today?
My fascination with the uilleann pipes has definitely remained, so in a sense, I would say that reason hasn’t changed, though I now have plenty of other excuses as well! When I reflect on my experiences with Irish music, and music in general, I realize that my life has been enriched through my involvement with it to a degree that I don’t believe would have happened through any other pursuit. It has stuck with me through good times and bad, and has given me a way to make a living, something upon which I can focus, and most importantly, it has brought me into contact with so many amazing people. Nearly all of my closest friends are people that in one way or another I met through music. I feel truly blessed to know all of them and cannot imagine my life without them. More than anything else, the people who play and appreciate music are the reason I could never put it down.

How would you describe your style & sound today?
I have no idea! I feel as if it’s definitely my own, especially on the flute. I’ve drawn from a lot of influences, though my main sources of inspiration have been powerful flute players like my original teacher, Laurence Nugent, and others like him that use their breath in a rhythmic way. On the pipes, I’ve most admired the playing of Seamus Ennis, Robbie Hannan, and Mick O’Brien. I haven’t studied any of those people very closely, but I’ve listened to them a lot and I feel as if a piping enthusiast would be able to hear that in my playing. If I had to categorize my own style, I would just say that I try to play with heart. I’m not interested in being precious about my music, just bringing energy and enthusiasm to the table when I play. I love players who have a good lift to their music and I try to emulate that to the best of my abilities.

What have been some career highlights?
Though I rarely talk about it, my very first band remains one of my fondest memories. I started to become comfortable playing on stage when I was about 17 or 18. My girlfriend at the time and I had met a handful of other people around our age who lived in different parts of the US and decided it would be really fun to get everyone together and play some gigs, so we organized a concert in Chicago and convinced everyone to fly in for it. That one concert was really fun, and we did a short tour in Alaska, and some gigs in upstate NY. All except one of the band members have gone on to be professional musicians, and one of them, Dan Lowery, and I still play in a band together today. The excitement of those first few traveling and performing opportunities was really special. Career wise, the first big thing that happened to me was winning the All Ireland Championships. I was 19 at the time and not especially confident in my musical abilities. Winning the competitions in 2002 definitely gave me a major boost of confidence and got people interested in hearing me. A few years later, I got invited to join fiddler Eileen Ivers’s band, and traveled with them for two years. That was a real growing experience and was great for my playing. After parting ways amicably with them, I spent a couple of years just playing locally around New York City, where I lived during and after college. In 2009 I started playing with an interesting group called Ensemble Galilei, and still perform with them from time to time. In 2010, I joined a touring show called Celtic Crossroads, and have ever since done at least one tour with them per year. I also joined the band Comas in 2011, and then some friends and I started a band called The Yanks. This year, some really cool new opportunities came my way. I subbed in the pit orchestra of Sting’s new musical, The Last Ship, for two weeks of their opening run in Chicago this summer, and will most likely be playing with them at some point on Broadway. Right now, the next really big thing that’s happening for me is a three-month tour in China with Riverdance, which starts onNovember 3rd. All that said, my favorite gig ever is a recurring one for me. Myself, Dan Lowery, and Alan Murray have a band called The Bronx Boys, and we play two months out of the year at a fantastic bar called John D. McGurk’s in St. Louis, Missouri. It is a truly wonderful place and those two guys are like my brothers. McGurk’s is significant to me as well because it’s been a haven of Irish music ever since it opened in 1978. Many greats have done stints there, as attested to by the photography lining the walls around the stage, including photos of McGurk’s alumni like Joe Burke, James Kelly, Paddy O’Brien, and many others. I first heard of the place when I was 14 and thought it would be a dream come true to play there someday, so when it finally happened, it felt like a rite of passage, and now it’s like my second home, a place to which I love returning.

What can audiences expect at your ReJigged show this weekend?
I’m definitely excited about the festival for a number of reasons, and one of them is that I’ll be playing with Seph Peters, a great guitarist and banjo player from Cape Breton. I’ve done some touring and playing with Seph and am really looking forward to the chance to make some more music with him. We’ll mostly be playing traditional Irish tunes, though I’ll definitely introduce a few of my own compositions, and we’d be remiss if we didn’t throw in a set of Cape Breton tunes as well! My taste in tunes is fairly traditional (even though I play in a couple of bands that do some pretty wacky stuff) so I like to choose tunes that have a traditional feel even if they’ve been recently composed.

Is enough being done to promote and preserve Celtic culture generally?
It’s hard for me to answer that question because I’m constantly surrounded by Irish music and culture, and to me it seems very much alive and well. I haven’t felt that an attitude of preservation is what is needed, because the music is so widespread and has so many great players in so many different parts of the world. In Ireland, the tradition is definitely going strong, and there are countless brilliant players in the US, Canada, the UK, continental Europe, and even in really unexpected places like Japan, Cuba, Colombia, Argentina, etc.. One of my favorite trips in recent memory was to play music in Colombia with a fiddle player named Carolina Arango, who’s from Medellín, the second-largest city there. We played concerts there and also in Bogotá and a few other smaller cities, and they were all absolutely packed full of people who were fascinated with the music. She also knows a bunch of other young people in both cities who are learning to play Irish music, and many of them have quite a knack for it! It was so cool to see young people getting excited about Irish music in a country that doesn’t have much Irish culture in it. Based on that trip and what I’ve heard from other friends that have traveled far and wide to play, I’d say our music will survive the test of time.

What could we be doing better?
If I had one bit of constructive criticism for the trad-appreciating world, I would like to encourage people to try and avoid thinking about our music as something that belongs to a particular ethnicity or a particular type of person. Many of the great players in Irish music today have no ethnic ties to Ireland, and even the best players from Ireland consider them as equals. Making a fuss over someone’s bloodline is, in my mind, contrary to the spirit of music and the human experience in general. What matters most is the spirit we bring to what we do, and if someone’s heart is in the right place, their contributions to our world are just as valuable as anyone else’s.

What’s next on your creative agenda?
Definitely the thing most on my mind right now is the upcoming tour in China with Riverdance. That will go from the beginning of November until the very beginning of February, at which point I’ll return to the US and, if all goes according to plan, work on a new recording with Ensemble Galilei for a couple of days, and then join up with some friends for a residency gig down in Florida for a month until going over to Ireland to do a short tour with The Yanks. After that, we’ll just have to see!