Island of the Sea God 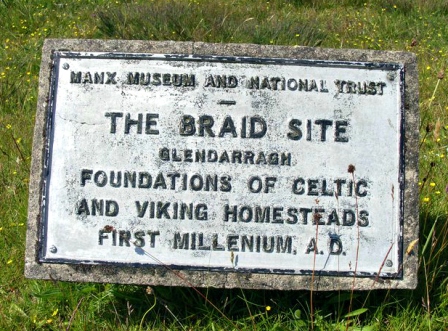 The Isle of Man’s striking castles and monuments are a legacy of its Viking and Celtic rulers, but they also illuminate the isolation and beliefs that are now a fundamental way of Manx life.

In the pre-dawn darkness the 1,000-year old Fairy Bridge crouches over a narrow trickling stream. It’s delicately placed near Santon in the south part of the island. My fingers curl around the car wheel as I edge along the narrow road.

Locals believe the Isle of Man is named after the legendary sea God and ruler Manannan Mac Lir. According to legend he could make one man appear to be as many as a hundred. And in the face of invasion Manannan could hide this emerald isle, in the Irish Sea, under a cloak of mist.

During the summer, locals bring a tribute of rushes to South Barrule, for Manannan. This is where his ancient Viking fort rests. By offering rushes, the locals believe Manannan will protect them with his magical powers. This tradition is also performed on Tynwald Day.

Tynwald has been running for over 1,000 years and is the oldest continuous system of parliamentary democracy in the world. Once a bill is agreed, it is then signed by Her Majesty’s Royal Assent before it becomes a law. It’s a big celebratory event for the island.

Its early morning, when I drive across an old stone bridge white-washed with paint, this is the time when traffic starts to peak. The air is cool and crisp as I wind-down the window and offer a greeting to the fairies. It’s another one of the myths here.

Fairies were believed to be the original inhabitants of this land, and when you cross over the Fairy Bridge you have to say “hello” or the following night a wicked curse will happen.

The Isle of Man was separated from Britain around 8000 BC, and its isolation from the rest of the world plays a crucial part in preserving these mythical beliefs carried over from the Vikings and Celts.

Tradition tells us that the very ancient symbol of the Isle of Man – the three legs – is Manannan whirling down Snaefell Mountain towards the sea. In Latin the emblem motto reads, “Quocunque jeceris stabit,” which translates, “whichever way you throw it, it will stand.” And this symbol acts asa reminder of the islands independent spirit and identity.

The sticky afternoon sun steams the windows as I pull the car into Maughold. A small town named after a minor Celtic saint. Maugholdis home to 40 ancient crosses. The crosses depict the integration between the Vikings and the Celts.

I want to savour my last moments in the late afternoon. Unlike many of the carved rock formations scattered across the island which have grown blurry with the passage of time, the detailed artwork on these memorials dating back to the 6th century are well preserved. It’s as if the sculptor just laid down his chisel.

Seeing these memorials evokes a scale of cosmic time in which human lives are so poignantly brief. But there’s a solace here in this magical land, a feeling of peace and wonder. Standing here, I wait to admire the finale. And then it happens.

The sun beams across the horizon. The rays reflect off every wave and spill over the purple hills of heather.