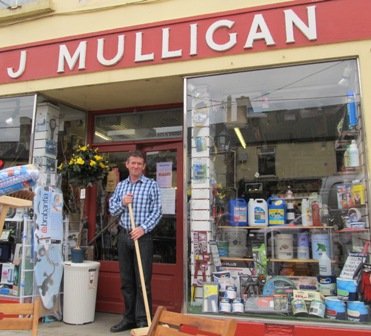 J. Mulligan’s in the market town of Ballaghaderreen, Co. Roscommon seems a typical Irish hardware store, with household goods in one window and tools and supplies in the other. Inside, cans of paint line the walls, crowded against boxes of nuts and bolts, electrical supplies and hand tools.

In another area, electric tea kettles (a staple in Ireland) squeeze beside dishes, pots and rolls of vinyl. But a doorway at the far side of the hardware section leads to the real gold mine of J. Mulligan’s—a bar. Here, the shelves contain bottles of whiskeys, vodka, beer and cider. Taps hold Guinness and Smithwick’s, chilled and ready to pour. This is where many regular patrons gravitate for what they jokingly call “a pint of paint.”

Owner Padraig Mulligan, 59, has been serving pints alongside the paint all his adult life.

“When I leave here they’ll be carrying me out feet first,” he said, while his son John stacked bottles. “This is my work, but it’s also my social life.”

Public houses, or pubs, used to be the centre of village life in Ireland, and often carried groceries and dry goods as well as spirits. A few multi-purpose pubs still remain, such as Foxy John’s in Dingle and Mooney’s in Monasterevin, Co. Kildare.

Padraig’s father, Jimmy, started the shop on Main Street on Dec. 8, 1944, at a time when items like bike tires, cigarettes and whiskey were scarce. With the war on, one had to be a merchant with permission from the government to sell these items. With these merchandise “allotments” in short supply, Jimmy saw an opportunity and started a hardware store to sell hard-to-find items for the home and farm, and a public house to quench the thirst of parched shoppers.

Padraig recalled the commotion on opening day. “A new opening in those days was a rare event. This, coupled with the fact that it was a holy day, ensured a large crowd.”

The Mulligan family, with five children, lived above the shop. “One of my earliest memories is of us kids sitting at this bar, screwing nuts onto bolts,” Padraig said. As a teenager, his father enticed him with the job of cutting oak beer barrels in half, using a hand saw. “He was as cute as a fox about it—he said it would build muscles, and that I could have the brass bung holes to sell.” Padraig earned about 70 cents total for cutting apart 28 barrels. Mulligan senior made considerably more by selling the half barrels for watering troughs.

“I told him he was making money on slave labor,” Padraig laughed.

On fair days in the spring and fall, farmers brought their animals and goods to the market town.

“…The shop would open at 6 a.m…We did a brisk business in hot whiskeys, tea and coffee. It was served in the snug, where there was a roaring fire,” Padraig said, pointing to what is now a stairwell.

Fair days were filled with the sound of cattle mooing and sliding as they were driven down Main Street. Farmers tied their donkeys to the back wall of J. Mulligan’s, where they awaited the return of their drivers, “in pre-breathalyzer days,” Padraig said. “On fair days the place would be wedged.”

Mulligan’s wasn’t the only pub in town. Padraig estimates there were 40 to 50 licensed premises. Now, there are about 13 pubs operating in Ballaghaderreen. Tougher drink-driving laws, an indoor smoking ban and the poor economy have hit pub life. But Mulligan’s diversified business thrived, and in 1982 Jimmy Mulligan bought a larger store and the hardware store and pub moved down the street. Padraig was managing the store then, but the move didn’t feel right.

“After one week I knew—I felt like a fish out of water. I had no grá for the place,” he said, using the Irish word for “love.”

His parents and brother, Brian, felt the same. They moved the store back to its original spot, although Brian continues to run a furniture store at the second location.

Jimmy Mulligan retired aged 75 and died in 1991 on Dec. 8 – 47 years to the day since he opened his pint-serving paint store. ~ By Marcie Miller