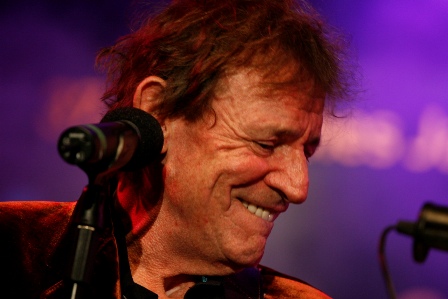 The Glaswegian bassist’s work most famously lives on with his former bandmates, guitarist Eric Clapton and drummer Ginger Baker, in the 1960s super-group, Cream, where Bruce laid down lines for such imminently memorable songs as Sunshine of Your Love, White Room and Crossroads. He also co-wrote a number of the band’s songs, including Spoonful, and sang on virtually the group’s entire catalogue.

But as highly regarded as he was as a member of Cream, Bruce also forged a successful solo career for himself after that band, playing with top rock and jazz musicians such as guitarists Mick Taylor, Chris Spedding, Steve Hunter, Clem Clempson, drummer Billy Cobham and keyboardists such as Carla Bley and David Sancious.

The bass player, singer and songwriter died at his home in Suffolk, aged 71, in late October. News reports said the musician had been suffering from liver disease. His family released the following statement on Bruce’s website: “It is with great sadness that we, Jack’s family, announce the passing of our beloved Jack: husband, father, granddad and all round legend. The world of music will be a poorer place without him, but he lives on in his music and forever in our hearts.”

According to the New York Times, Pink Floyd’s bassist, Roger Waters, called Bruce “the most musically gifted bass player who’s ever been.” Cream sold over 35-million records in two years, in the process gaining the first platinum record ever. As a member of Cream, Bruce was inducted into the Rock and Roll Hall of Fame in 1993. In 2005, along with bassist Ron Carter, Bruce received a Bass Player Lifetime Achievement Award, and in 2006 accepted a Recording Academy Lifetime Achievement Award on behalf of Cream at the Grammy Awards.

Bruce was born in Glasgow, Scotland in 1943. He completed his formal education at the Royal Scottish Academy of Music, where he won a scholarship for cello and composition. At the age of 16, discouraged over the lack of interest from his professors in his ideas, he left school and travelled to England and Italy, where he played double bass in dance and jazz bands. In 1962, he joined his first important band, Alexis Korner’s Blues Inc., whom later alumni would include the Rolling Stones’ drummer, Charlie Watts.

The next year Bruce joined the Graham Bond Organization, a seminal blues band, which Bruce left after drummer Ginger Baker called his playing “too busy.” Stints with John Mayall’s Bluesbreakers and Manfred Mann followed before, ironically, Baker invited Bruce to join him and Clapton in Cream. In 1968, at the height of the band’s popularity, Cream split, with Bruce feeling hampered in the band and wanting to explore more in his music.

What followed was a long successful solo career with 14 albums, appearances on many more and concerts on top of that. Bruce mixed rock, jazz and classical together, often drawing on other musical influences as well. He played for a period with important jazz drummer Tony Williams in his Lifetime band, but remained true to his rock roots with the formation of West Bruce and Laing, which included Leslie West of the very heavy rock band, Mountain.

Bruce picked and chose the sessions he wanted to work on, playing on Lou Reed’s Berlin and Frank Zappa’s Apostrophe albums. In the late ‘90s, he toured with Ringo Starr’s All Star Band, joining pop stars Todd Rundgren, Dave Edmunds and Peter Frampton. In the middle of his prodigious creativity, he reunited with Clapton and Baker for a Cream concert tour in 2005.

In the years before his death, Bruce continued at a fever pitch: he was awarded two doctorates, played with musical luminaries ranging from Robin Trower and Vernon Reid to Martin Medeski on projects of his own creation and wrote his biography. Writing in the Telegraph, Neil McCormick said that Bruce was “widely revered as the best there was on four strings…” and that he “unleashed the potential” of the bass.