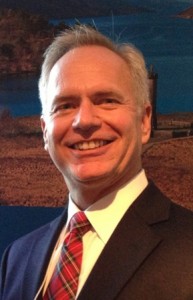 James Hare is Executive Director of the National Trust for Scotland Foundation USA (NTSUSA). Here, he answers our Seven Celtic Questions and explains his passion for discovering and preserving the past.

What are your own Celtic roots?
Like many Americans, they’re very mixed. In addition to Scots, there is English, French and German DNA in my tree.  When I’m asked what I wear under my kilt, my answer is always lederhosen.

Why are those roots important to you?
I am foremost a Coloradan because of my great-grandfather, James Scot Henderson, who was born in Duns, Scotland.  As editor of a British monetary journal entitled The Bullionist, he traveled from London to Denver in 1882, presumably to investigate the Colorado gold rush. He then returned to the UK and promptly died leaving my great-grandmother, Elizabeth, another Scot from Portpatrick, with seven children to support. She’s the one who really directed my Celtic journey by packing up her five youngest and emigrating to Colorado in 1886 to a cow town on the eastern plains called Lamar. Unfortunately, that’s as much of the story as I’ve been able to piece together. Lamar is still a remote place, but in the 188os it was the center of a booming international cattle industry. A consortium of Edinburgh bankers, organized as the Prairie Cattle Company, controlled about six million acres of range land in Colorado and northern New Mexico, and I assume that there must have been a connection with their business interests and my great-grandparents that brought that portion of my family to the West.

What does it mean to you to be of Celtic heritage?
Because many of the details of my Celtic origins remain unclear, this heritage means a great deal to me; it provides the historian in me with the greatest treasure of all — a rich and wonderful past to explore. I have a lifetime of entertaining investigation still before me; and not just in Scotland, but in Ireland, most likely, as well.

How are you involved with the American Celtic community?
NTSUSA aims to generate support from Americans to help protect the natural and cultural treasures under the care of the National Trust in Scotland. That task has put me in touch with Scottish organizations across the U.S., and Canada as well, where a sister foundation, the Canadian National Trust for Scotland Foundation, has recently been established. But it’s not just about Scotland, as much as I love it. Recently, for example, I was at an event for The Irish Georgian Society, which is working to protect Ireland’s architectural heritage. I am also working with the Buffalo Bill Historical Center to help interpret the story of the Scots in the West. Our first annual symposium will be held at the Smithsonian in Washington, DC, on August 8-9.

Why is it important to keep Celtic culture alive in the U.S?
A day without tartan is like a day without sunshine, and that is reason enough for me and many others I know, like the great American retailer, Brooks Brothers, who have brought my favorite kilt maker, Kinloch-Anderson, into their New York flagship store on Madison Avenue.  But I’d like to focus on another topic near to my heart and to that of the NTSUSA, which is Scottish Roots Music. Our organization has helped incubate a new organization called the Alliance of Scottish Roots Music, which aims to educate Americans and people across the globe about the tremendous influence that music of Celtic origin has had on that of their own lands. The Alliance has a musical ensemble called Atlantic Seaway, which brings brilliant young musicians from both sides of the ocean together to demonstrate just how fundamental Scottish Roots Music is to world musical culture.

In your estimation, are we doing enough to keep Celtic culture alive generally?
We’re doing great because we have so much to work with, although there are unexplored possibilities. Thanks to Skyfall (significantly filmed in Glencoe, which is a special property of the National Trust for Scotland) we finally all know that James Bond is a Scot. But if you really want to see how Celtic culture is being celebrated today, go see From Scotland With Love, the astounding New York fashion extravaganza that anchors Tartan Week in New York each spring, or enjoy the holidays with Clan Currie’s Pipes of Christmas concert in Manhattan, or Brian O’Donovan’s Celtic Christmas concert series in New England. If you are in NYC right now, don’t miss Alan Cumming in Macbeth.

What can we be doing better?
Here’s an idea…wear your kilt to work. You’ll be the most popular person around the water cooler and you’ll remind the world that the Scots (and some Irish, too) are the most brilliant business leaders.