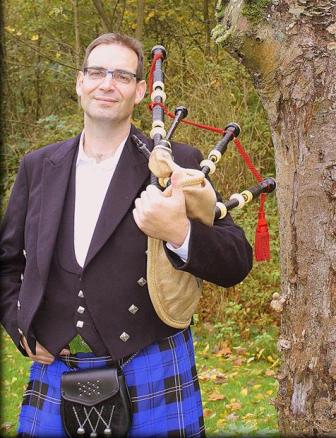 When it comes to bagpiping, Jan Bolhuis’s repertoire includes some of the classics – the rock classics; AC/DC, Elvis and Iron Maiden. Clearly, Bolhuis isn’t your average Highland piper. In fact, the Dutch piper played with some of Holland’s top rock bands, such as The City of Amsterdam, before forming his own group called Excalibur.

Excalibur was together from 1991 to 1998, during which time the group played a mix of traditional and non-traditional music, including what Bolhuis describes as “fast-paced tunes on the pipes with timpanis,” for example. These days he’s expanded to incorporate trance and dance styles.

“I am trying to get to a more professional level, so, for example, DJs can incorporate my sounds in their mixes. I would love to create some mixes of my own,” Bolhuis says.

At the age of 15, Bolhuis became a pipe sergeant, the result of his love for Scottish music and from practicing four hours a day. He first encountered pipes at folk music festivals and immediately took to them. Later, he heard records of Scottish pipe bands and was awe-struck by the powerful sound and the unison of pipers all playing as one.

“A few years later I met a real pipe band and was in next Monday for practice. It was great to be able to play the music I loved,” Bolhuis comments.

Influences for Bolhuis as a teenager included the Battlefield Band, Gordon Duncan and John Burgess.

“They opened up a world that was bigger than playing marches and simple strathspeys and reels,” he comments. “It meant I started to look at music differently and it was a great example of how to play more popular music. In the 1990s, I got some lessons from Duncan Johnstone and that was also very inspiring. Again, it was looking at music differently, which broadened my view and gave a better understanding of the music.”

He still loves the sound of the bagpipes today and says that he loves to spread “happiness and joy” with his music.

“And as getting better is in my DNA, I want to achieve perfection,” Bolhuis vows. “I also want to re-start the band Excalibur, and play good and cool music at a high level.”

Bolhuis owns two sets of pipes; a 1980’s African Blackwood Sinclair and a set of Duncan MacDougalls from around 1880. He mostly plays the MacDougall as he likes the sound of them better. In terms of style and sound, Bolhuis can be traditional. He points out that the MacDougall has a sheepskin bag and is fitted with cane reeds. Bolhuis also uses wooden Sinclair chanters, creating quite a traditional sound.

“On the other hand,” he notes, “next to ‘standard’ bagpipe tunes, I also play modern and different tunes. I like playing that and the audience loves it.”

Generally, the Netherlands has about 40 pipe bands, Bolhuis says. Most are small, non-competitive bands, some of which compete. According to Bolhuis, what’s lacking with the “pipe band ecosystem” is a good feeder system where talented good players can move on to a higher graded band.

Looking ahead, Bolhuis jokes that plans have never been a problem; rather, it’s finding the time to fulfill all those plans. Most immediately, he has a piping exam forthcoming, which includes Pibroch style, which has never been a part his repertoire. And looking farther down the road, he wants to publish a music book for the Highland bagpipes, he calls “Hallway.”

“It contains compositions and arrangements of mine,” Bolhuis says. “Looking at my list of ambitions, that will likely be 2016.”