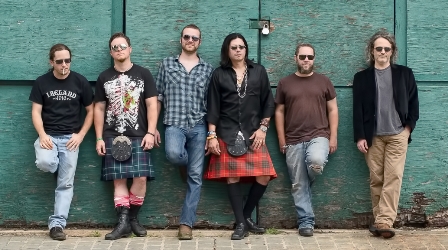 Formed on St. Patrick’s Day in 2004, Alabama’s Jasper Coal are keeping Celtic traditions alive in the Southern U.S. Recently we spoke with the band about who they are, what they do, and their latest recording Drowning the Shamrock.

What is your own background/ethnic heritage?
The members of Jasper Coal are a bit of a mix. Save for our drummer who is Mexican-American, we are mostly of Irish and Scottish ancestry with a smattering of German, Italian, Norman, and English.

When and why did you start playing music together?
The band was initially founded in 2004. Most of the members of the band have been playing some form of traditional Celtic folk music for many years. The vocalist Matt Parrish has many relatives in Ireland and was exposed to Irish music at an early age. Bass and banjo player Jeremy Burns was a member of the popular local Irish band Shillelagh Law before joining Jasper Coal. Guitarist Ian Hoppe’s first foray into music was actually in a metal band. His first exposure to Celtic music came from his mother who plays fiddle and bodhran. The band initially played around town to make drinking money on St Patrick’s Day. In 2009 highland bagpiper Ryan Morrison attended a show and shortly after began bringing his pipe band to perform at the shows. Fiddler Kevin Nicholson, who has been playing since he was a child, first learning old-time and Bluegrass style before moving on to Irish fiddle. Both Ryan and Kevin gradually began performing on stage with the band until becoming full-fledged members in 2009 and 2010. During the process of recording our current album, the band exchanged the traditional bodhran for trap set, once again refining our style and identity. Our new drummer Miguel Martinez has had relatively little exposure to this music, being a first-generation Mexican-American, though he has been a long-time fan of the band. He and Ryan were childhood friends who played in a metal band together in high school.

Are they the same reasons you do it today?
Though most of us were drawn to this music because of our ancestry, the music has taken on a life of its own for us. We take pride in acknowledging and honoring the traditions of this genre of folk music while flavoring it in our own way. This band has gone from being a passing hobby that would pay for beers twice a month to something we really love and cherish. As we’ve added members and our sound has progressed to where it is now, our emotional ties to the music (and the act of playing the music) have grown by leaps and bounds. There is no more rewarding experience than when all of us are locked in with one another live on stage. You can’t get that feeling anywhere else. But, performance-high aside, there is no question; we play this music because it is in the blood.

How has the group evolved since that time?
The group and the music have evolved exponentially, and we’re discovering some new ground together which is exciting. We are certainly developing a more sophisticated approach to the music. If we had to pick one word it would be “refinement”. We’ve spent the last few years earning our stripes with live shows, and the process of honing it all down for the current album forced to us to dress it all up in its best clothes so to speak. Since then we’ve tried to trim out a fair bit of the older standards in favor of a presentation that’s more in line with what we set out to display on the recording. We’ve all recognized and coalesced around a common sound. We know what Jasper Coal sounds like.

How would you describe your sound today?
We like to consider ourselves an inventive mix between the popular Celtic folk-punk subgenre and more traditional Irish music. No doubt we take a great deal of influence from bands like The Pogues and Flogging Molly, but we also enjoy performing the traditional dance tunes, like polkas, jigs, and reels. We tend to mix much of this traditional music in with the songs we perform.

What inspired Drowning the Shamrock?
The name of the album was inspired by our inclusion of the traditional folk song enjoyed by the Scots and the Irish alike “The Parting Glass.” Irish legend tells a story of St Patrick, who whilst patronizing an inn was served a rather ungenerous measure of whiskey by a stingy innkeeper. Patrick warned the innkeeper that in his cellar lived a gruesome devil that was flattened by the innkeeper’s greed. To banish the devil, Patrick implored the innkeeper to change his ways. Upon returning to the inn, St Patrick found the owner pouring the whiskey freely. With no more greed to feed upon, the emaciated devil was then banished by St Patrick, who thereafter proclaimed that everyone should have a drop of whiskey on his feast day. So, on St Patrick’s Day, pub patrons drink from the “pota Pádraig,” or Patrick’s Pot. Upon imbibing the evening’s parting glass, patrons remove the shamrock pinned to their lapel and float the plant in the whiskey before downing the shot, a custom called “drowning the shamrock.” The shamrock is then tossed over the left shoulder for luck.

What were the challenges of putting the new recording together?
Recording an album is always a challenge, especially when you do it in-house like we did. All of the logistics and critiques during recording can be frustrating. Luckily, we’ve got our bass player and engineer Jeremy Burns to facilitate all of that. The mixing and mastering is tough, especially when there’s six, fairly opinionated musicians listening to every note ten times a day. The recording of this album actually caused a bit of a break in the band which required us to acquire a new drummer after the album was already recorded, mixed, and mastered. So ultimately, we had to return to studio to record fresh drum tracks for the entire album.

What were the rewards?
I suppose it’s safe to say that we are still discovering the rewards. With the attention the new album is getting we’ve enjoyed a lot of new and exciting opportunities. But most of all, we’ve developed a stronger bond than we’ve ever had. This was a rite of passage for us, and we came out the other side with a deeper respect for the music, for the show, and for one another.

What has the response been like so far?
I’d say the response has been positive. Like any traditional music form, there’s a certain amount of care that needs to be taken about going in and changing things about. Adding a full trap set is a pretty major change for the rhythm section of the band, but the fans seem to be pleased judging by our CD release show which was our first with the new lineup.

What makes a good song?
This of course differs with various genres, but we’d say in general that a good song is one that stirs you, physically, emotionally, or even spiritually. With this album we’ve strived to make music that rouses the listener. We hope the dance tunes make you want to dance, we hope the songs about love and loss resonate with your own experiences of love and loss. We want our listeners to relate to the music on a personal level, and we like to think that they do.

Where do you typically perform?
We mostly perform in and around the Birmingham area. At the moment we’re trying to expand our borders and we’re booking shows in neighboring states. Perhaps one day we’ll make it up to Canada!

What is the response like from audiences?
Overwhelming! Since the addition of our new drummer, our fans have been blown away at the bigger sound and have been very receptive and supportive. Our fan-base is really quite excited about where Jasper Coal is headed!

What does the band have on tap for the rest of 2013?
Jasper Coal plans to continue performing locally and throughout the Southeast to promote the album. We are also looking forward to getting back in the studio to begin recording tracks for an EP we intend to release in early 2014. The EP will include a couple of Jasper Coal standards as well as some original songs by the band.

Are we doing enough to preserve and promote Celtic culture generally?
We never really set out to promote Celtic culture in and of itself per se. We do feel like we may inadvertently be expanding awareness of at least the musical component of the culture here in Birmingham and in Alabama. The ways in which we diverge from a strict traditional approach probably makes us a little more accessible to a larger audience, and the ways in which we hold to our traditional backgrounds can show them the beauty and depth that’s available in the music itself once we get them in the door.

What can we be doing better?
By virtue of the style of music we perform, we tend to share our heritage with our audience. Though the band collectively is not necessarily affiliated with any heritage organizations, we do try to make an effort to support local cultural interests. The members of Jasper Coal host and perform at local Celtic music sessions, some are members of other local Celtic music acts, and some serve on the boards of various local Scottish and Irish heritage organizations.