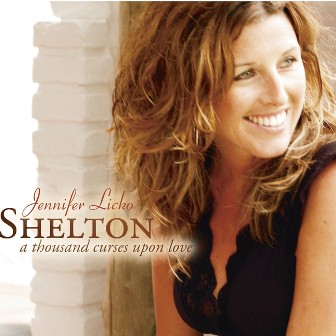 From Swansboro, North Carolina, super-soprano and mega multi-instrumentalist Jennifer Licko could very well be the heir-apparent to Canada’s Loreena McKennitt and Clannad’s Maire Brennan. Recently we spoke with her about her latest recording, A Thousand Curses Upon Love.

What are your own roots?
I am 7th generation Scottish. Four Guthrie brothers came by boat to the United States from Scotland in the late 1700s. One of the brothers was the father of John Wesley Guthrie. His father (John J Guthrie) got off the boat at Morehead City, North Carolina. John J Guthrie was my great, great, great, great grandfather.  My grandmother’s maiden name was Kelly, so I also have Irish heritage.

When and why did you start playing music?
I come from a musical family. I always loved singing and my mother was a music teacher so she taught me piano at a young age. I studied music for years formally, and while I was in music school I lost that childhood love for the music that I once had. It wasn’t until I moved to Scotland and began singing folk music that I felt that passion for music again.

Are they the same reasons you do it today?
Yes, I still play music because I love it and because I feel like my most authentic self when I am singing and performing.

How have you evolved as a songwriter over that time?
I believe my songs have evolved in the way of simplicity. I do not write very much, but when I do write my songs tend to be a less complex art form than they were when I first began writing.

How would you describe your sound today?
I strive to sing with the most honest feelings behind my voice. For me, that means being as clear and pure with my voice as possible. It also means giving the music space and a sense of comfort to allow listeners to really hear the music and the words.

What went into the new recording?
Song choices were big for me. I wanted to make sure that I felt a connection with each song. Also, the musicians I worked with on the album were really intuitive about the music. Eamonn Dillon plays whistle throughout the album and adds a nice bright touch. Charlie Morgan on drums, always knows just how much to add to give the track a nice feel without hearing ‘drums’. Bob Noble, my producer, was able to turn some of my ideas into a sound that was better than I anticipated.

What were the challenges involved?
In the studio, one has endless possibilities with instrumentation on the arrangements. However when I perform live with my band, it’s normally only a 3 piece. I think it is challenging to make sure my album sound is similar to my live sound.  For example, we have drums on many of the album tracks, but rarely do I have a drummer play live with me. An album and a live show need different elements, but shouldn’t sound totally different. I think I found that balance.

What were the rewards?
The reward is having an album that I’m proud of.

What makes a good song?
In my opinion, a good song evokes emotion from your audience – so it really depends on your audience. If your audience is a folk audience, normally that means a song where the lyrics tell a story that have some lyrically substance. It often means having a very familiar sounding melody line that can be learned quickly for singing along. Having said that, I also feel that what makes the best songs depends on how the song is delivered. I think that you have to feel a connection to the song to be able to deliver it with authenticity.  I believe that the connection and delivery can make any song a good song.

What are your thoughts on the current Celtic music scene?
I think there are some great things happening in Celtic music that are taking it out of this little square box that it has been in for quite a while.  “Celtic Music” encompasses so many styles and interpretations and I think audiences are realizing it is more than the drinking songs and dance tunes.

Is enough being done, generally, to preserve and promote Celtic culture?
I’m not sure. I’ve lived in 6 countries and traveled throughout the States. Many people I encounter ask what I do for a living and 99.9 percent of the time their response is ‘Oh, I love Celtic Music!’.  So it shows that people are aware of it. However, I’m not sure how deep their awareness goes.  I was just traveling in Brazil and when I told a Brazilian that I sing Celtic music she responded by telling me that she just bought tickets to see Celtic Woman.  That may touch on the prior question a bit because many people have the idea that Celtic music is only ‘Celtic Woman’ or ‘Riverdance’; which certainly is a partial representation, but not a full representation.  Preserving the Celtic culture is something that starts with the promotion. Once someone is interested, then they help with the preservation. When children become involved with a type of Celtic dance or an instrument such as the fiddle or whistle the preservation begins. I think schools such as the Center for Irish Music in St. Paul, are a fantastic way to nourish the preservation.  Also Irish dance and Scottish dance schools play a huge role in the preservation.

What can be done better?
I honestly think it has to start with the musicians.  We need to introduce what we do best in our on little niche of Celtic music to our audiences.  We need to record songs that may be unfamiliar to Celtic music fans and we need to make sure this music easily available. We also need to be available and willing to share through educational workshops and programs. For over ten years I have presented programs in elementary schools on the Irish and Scottish culture through music and dance. I love sharing with the kids and their reaction to the music and dance is priceless. It is just an introduction for many students, but it just may spark an interest in one of them to start taking Irish dance classes or learn to play the penny whistle.

What do you have on tap for the rest of 2014?
A Celtic Christmas Tour is scheduled for 2014 with my band.  This will be our fourth annual Christmas concert tour in North Carolina. There are such strong Scottish connections in North Carolina and I love returning every year for the Christmas show.  I’ll be promoting the CD on that tour and performing the Christmas track ‘Nollaig na mBan’ from my album, “A Thousand Curses Upon Love.”