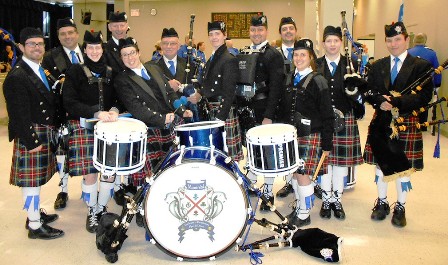 Jérémy Tétrault-Farber says he fell in love with piping when he was 12 years old. His father was on a business trip to Sarasota, Florida, and the preteen tagged along. There, they stopped at a Renaissance Fair, where a hybrid medieval /Celtic band was performing – the youngster was immediately hooked.

“I lived parallel musical lives for a few years afterwards,” smiles the Montréal native.  “While learning the rudiments of music on the trumpet in high school, I listened to Irish and Scottish music and taught myself the tin whistle. By the end of high school I’d firmly drifted into the proverbial musical Celtic fringe.”

At that time, Tétrault-Farber admits he wasn’t overly concerned with the quality of his piping – he was happy just to be playing the instrument. However, his teachers encouraged him to morph his enthusiasm into focused musicianship. The push paid off, and he now has 12 years on the uilleann pipes under his sash, along with 9 years of Highland piping.

He is quick to credit those mentors, and duly notes other important influences, including the late Gordon Duncan, a piper and composer from Turiff, Scotland, Chris Armstrong of the Scottish Power Pipe Band, and Stuart Liddell, who has won multiple awards for solo piping.

Tétrault-Farber is currently one of two directors in the Montréal Pipes and Drums (MPD) band, which has a number of parades and shows lined up this summer. As well, the group will be competing at several Highland Games around Quebec, Ontario and New Hampshire.

MPD may be a traditional Scottish bagpipe and drum band, but the Pipe Major says his personal style and sound does not always fall into that category.

“I like playing traditional tunes as part of non-traditional arrangements and medleys. Some of my favorite piping moments are at the end of band practices – when pipers and drummers throw a few tunes together and let medleys spontaneously take shape.”

Though he enjoys passing his passion for piping along to younger people in his home province, Tétrault-Farber doesn’t see an overwhelming interest in the instrument there.

“I think fewer young people here make piping a pillar of their life than, say, youth in places like Ontario, or even Scotland,” he shares. “This makes sense for obvious historical reasons. And while I could be wrong, it seems to me that for those youth who do take up bagpipes, piping remains just one of many interests in their busy, perhaps overloaded lives.”

Tétrault-Farber has no ancestral connection to Scotland (that he’s aware of), but he continues to pipe for the beauty and challenges of the music. As for career highlights, he can’t narrow it down to just one – there are three key moments he gets nostalgic about.

First, he recalls piping at Fort Henry in Kingston, Ontario in the summer of 2008.

“An epic downpour was clearly about to force a show cancellation, and I felt bad for the people who had paid to see the Fort Henry Guard perform. Even under the soaking-wet circumstances, however, a soggy rendition of Scotland the Brave managed to spark a rousing applause.”

Another fond memory is winning first place in Grade 5 solo piping at the Glengarry Highland Games in 2009.

“For me, this marked the start of the shift from wild-eyed enthusiasm to a more focused approach to piping,” he notes.

Of course, he can’t forget when he was asked to take on the central role with Montreal Pipes and Drums. The incumbent Pipe Major was moving to the U.S., so Tétrault-Farber was asked to step in, and he jumped at the opportunity.

“I figured a chance like this would never come again,” he says. “I’ve been leading the band since August 2013, and I haven’t regretted a moment of it.”