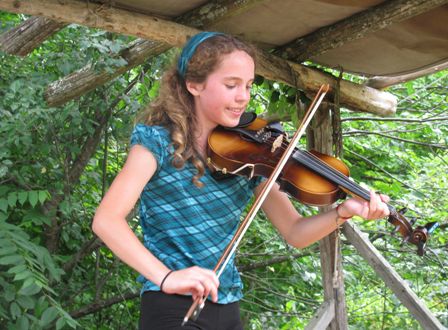 Jessica Wedden is only 12, but the young fiddler already has her sights set on recording her first CD.

“People have been asking to buy my CD for over a year now,” she exclaims. Not short of ambition, Wedden also wants to have her first solo fiddle concert before she turns 14 and confides, “Someday it would be nice to have my own band, and play with other bands.”

Wedden may be one of the next generation of upcoming Natalie MacMasters. She lives roughly an hour away from Ottawa and Kingston, in a rural Ontario village called Tichborne. Her heritage includes Irish, Scottish, Dutch, English, German and French.

“A couple of my ancestors were fiddle makers,” she notes, “but that goes back quite a few generations.”

Nonetheless, fiddling must be in her blood. She started on the instrument two-and-a-half years ago at the age of nine. That was when she joined her friends in the Blue Skies Fiddle Orchestra beginner group, situated in Maberly, Ontario.

“The fiddle teacher and director, Cindy McCall is very nice and it sounded like a fun thing to learn,” Wedden comments.

McCall, a food services supervisor at the Grove Nursing Home in Arnprior, Ontario, acts as the conductor of the Blue Skies Fiddle Orchestra.

The orchestra began 15 years ago as a way to foster fiddle music traditions in the community through “fun and affordable music instruction.” Every year the amateur, charitable, non-profit group performs in local venues, seniors’ homes and elsewhere. The ensemble gives individuals the opportunity to learn a musical instrument and to read music, play as part of a team and follow a conductor.

The orchestra’s main sponsor is Blue Skies in the Community, the registered, non-profit charitable arm of the Blue Skies Music Festival.  The former supports the conductor and the purchase of sheet music as well as maintains an instrument-lending library which rents fiddles at a nominal cost so that all families and individuals have access to the orchestra.

For a young musician such as Wedden, it can mean the introduction to a passion for fiddling and music. Wedden learned not only how to play the fiddle, but received the opportunity to attend fiddle workshops and learn from a variety of more experienced fiddlers.

“I get to meet new people,” she says. “I love to go to Blue Skies Art Camp where I can play my fiddle. I also get to travel and play on stage for the audience at different events. I even get to do a bit of step dancing and do my own trick fiddling.”

Now Wedden plays with the main orchestra, having graduated from the beginner group. She practices with the orchestra two hours a week and also takes lessons from Cindy Thompson. With three CDs of her own music, Thompson has performed on the Tommy Hunter Show as well as with Ashley MacIsaac when Rita MacNeil had a television show. To get her one hour and 15 minute lesson every other week, Wedden travels an hour and 20 minutes to meet Thompson.

Ask her about her career highlights and Wedden ticks off any number of contenders; an already impressive list for such a young fiddler; she has played on stage with Scott Woods, a multiple Canadian Open and Canadian Grand Master Fiddle Champion; won the fan favourite award in the Enterprise Youth Talent Competition in 2013; and won first place in the instrumental class at the Parham Idol Competition in 2013.

But Wedden’s favourite story involves attending the Greely Legion Country Music Festival. She was supposed to play, but encountered problems with the electric pick-up on her fiddle. The man who played before her lent her his own fiddle. After she had played, Wedden discovered she’d been using the fiddle of Peter Dawson, who was inducted into the North American Fiddlers’ Hall of Fame in 2005.