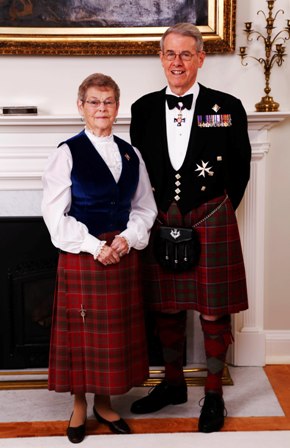 Perhaps no one better exemplifies the Celtic spirit of Atlantic Canada than The Honourable John James (JJ) Grant, Lieutenant Governor of Nova Scotia. Here, he answers our Seven Celtic Questions.

What are your own roots?
My wife, Mrs Joan Grant (nee Fraser), and I trace our roots back to Scottish immigrants to Nova Scotia in the 1790s and early 1800s.

Why are those roots important to you?
It is important for us to know where and who we come from, to appreciate the culture and traditions our ancestors brought with them to Nova Scotia and to recognise the contributions of the Scottish people to our province and our country. We have endeavoured to pass on this knowledge to our children so that the legacy of our descendents will not be lost.

What does it mean to you today to be of Celtic heritage?
We are Canadians first, however, we treasure our Celtic heritage and traditions. Celtic music, dance, military traditions and history have had an indelible influence on Canada and on Nova Scotia in particular. My family and I take great joy and satisfaction from participating in community events that celebrate these contributions and also inspire new generations to embrace their heritage.

How are you involved with the Celtic community?
My family is very involved with the Celtic community in Nova Scotia and beyond. My wife and I were avid drummers in pipe bands although my wife received far more accolades for her musical skills. Mrs Grant was the first drum major of the Ceilidh Girls Pipe Band and in 1951 was among those selected to perform for Her Royal Highness Princess Elizabeth and His Royal Highness Prince Philip, Duke of Edinburgh, during their first official visit to Nova Scotia. As a founding member of Fraser Holmes Memorial Ladies Pipe Band, Mrs Grant also participated in the Royal Nova Scotia International Tattoo in 1983, 1984 and 1985. During my military career, I served in two Highland Regiments which is represented on the Coat of Arms recently granted to my family by the Canadian Heraldic Authority. Two of my sons also served in a Highland Regiment during their careers. My family and I also enjoy the social side of Celtic culture and belong to the Saint Andrew’s Society and the Festival of Tartans in Pictou County. We join in local festivities to celebrate Saint Andrew’s Day, Robbie Burns Day and Tartan Day as well as marking the Battle of Culloden at Knoydart in Nova Scotia.   We have also participated in Celtic events in Ontario, Quebec and Florida and continue to look forward to attending several Highland Games each summer.

Why is it important to keep Celtic culture alive?
I believe that it is important for people of all ethnicities to keep their history and traditions alive. Canada has a rich diversity of citizenship and our willingness to share in the traditions of others encourages vibrant, caring and dynamic communities.

Is enough being done to preserve and promote Celtic culture?
There are several successful initiatives in Nova Scotia to promote and preserve Celtic culture generally but, as with anything, there is always more work to do. Organisations such as the Cadet Movement and the 78th Highlanders Association Piping School have done great work in supporting young people who are interested in piping. The annual Celtic Colours celebration in Cape Breton has developed into a world-class festival that attracts musicians and music lovers from around the world. The Gaelic College in Cape Breton and the Office of Gaelic Affairs do a wonderful job in promoting the Gaelic language. The success of these initiatives demonstrates that Celtic culture is not only about the past but is very much alive in our communities.

What can we be doing better?
In terms of what we could be doing better, an increase in venues for Highland Games would be welcome. Finally, those of us of Celtic descent have a responsibility to engage our young people in the rich traditions of Celtic culture.