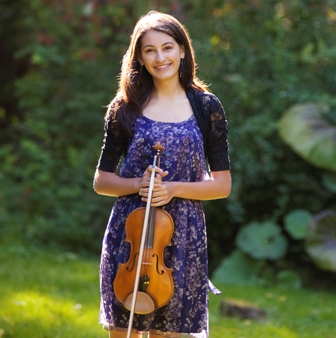 The West Coast is a long way from the East Coast of Canada, but somehow the Cape Breton fiddling style has found its way to the coastal mountains of British Columbia.

There, 19-year-old Jocelyn Pettit is swiftly making a name for herself as an adept fiddler who plays not only Cape Breton style, but Scottish, Irish, Galician, Breton, Quebecois and what she refers to as an evolving style of her own.

Pettit already has one recording out and is working on a second. She’s received two Canadian Folk Music Award nominations for World Artist of the Year and Young Performer of the Year, as well as a nomination for songwriting competitions in the United States and France. Pettit played at the Vancouver 2010 Olympic Victory Medal ceremony, and performed with the Chieftains during their 50th Anniversary World Tour.

Her first exposure to the fiddle, and the East Coast style of playing, came at age four at the Salmon Arm Roots and Blues Festival. Natalie McMaster performed. “I was four years old at the time,” she recalls, “and that performance had such a powerful impact on me. The energy and drive of the Cape Breton music was so much fun! A spark went off. I thought, I want to do that, too.”

Seeing McMaster also triggered her love of the Cape Breton style of fiddling. She says on hearing McMaster a note was struck somewhere inside of her. “I was drawn to the rhythmic energy and pulse of the music and felt – and still do – an irresistible urge to get up and dance.”

It helped that she grew up in a family both Celtic and musical. Pettit’s heritage is Irish, French and Malaysian. Her great-great-grandparents emigrated from Ireland, while her great-grandfather was a dance caller, who teamed up with a fiddler for community events and celebrations. Her mother plays the piano and fiddle, her father the bodran and guitar and when she took up fiddle at the age of eight, playing music with her parents became a regular activity.

Pettit says Celtic music forms the foundation of her fiddling and that she loves learning the different styles of fiddle playing. “I’m fascinated to explore music from the Celtic nations, from both traditional and contemporary composers. I’ve often thought it would be great to have a time machine, to be able to just stop the clock and enjoy learning and writing more music!”

Everywhere she goes in British Columbia, Pettit says she encounters interest and enthusiasm for Celtic music. She points to such events as CelticFest in Vancouver, which has become one of the West Coast city’s largest events and draws 200,000 people to its annual parade. The BC Highlands Games has also been going on since 1932. Beyond that, Pettit notes lots of other regional cultural events and music festivals also feature Celtic music and fiddling as well as community ceilis and ceilidhs.

In terms of her own compositions, Pettit strives to create engaging and memorable melodies. She wants them to connect in some way with people. Writing is an evolution, she says, whereby an initial melody or motif develops into a full piece over time. “I like to take a number of writing sessions to adjust notes and play with how to put all my thoughts together.”

Pettit loves performing and sharing the joy of what she does with others. Her goal, she says, is to create a memorable show of the highest possible quality. Over the next few months she has shows lined up in BC, Ontario, France and Ireland. “I’m so happy and grateful to be making music my profession, travelling the world doing what I love and meeting so many wonderful and supportive people along the way.”