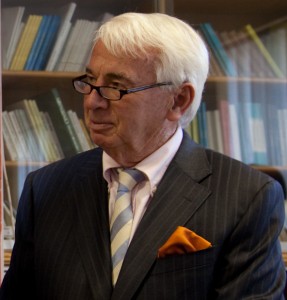 Professor, lecturer, author, engineer, chairman, board member, and Registrar and Deputy President of University College Dublin – John Kelly’s long list of accomplishments is both impressive and inspiring. Currently, Kelly is the Executive Director of the Ireland Canada University Foundation (ICUF), a not-for-profit organization established in 1993 for the purpose of encouraging and facilitating academic links between institutions and scholars in Ireland and Canada.

On his own heritage

I was born in 1935 and grew up in Newry, Co. Down in Northern Ireland. I was fourth in a family of seven — four boys and three girls. My father was a shopkeeper. Newry was a mixed Catholic-Protestant town, but there was no friction, quite the opposite. We had a holiday home in Killowen on the shores of Carlingford Lough where I became a useful swimmer and climber of the Mourne Mountains…I was quite fluent in the Irish language and was the under-10 hornpipe dancing champion of Ulster, Newcastle Feis Ceoil, 1945. It was a wonderful and happy childhood.

The mission of the Foundation is to promote academic cooperation between Ireland and Canada by awarding short-term visiting scholarships to Canadian and Irish research scholars so that they can visit each other’s countries and work on research projects of interest to both nations.  A secondary mission is to assist in the development of both Irish language and culture in Canada.

On his responsibilities with the organization

As Executive Director, I am the Chief Executive Officer and, whilst in the early days I did most everything, I now concentrate on fund-raising from corporate and private sponsors as best I can, and from both Governments. This is increasingly difficult, with both the corporate and governmental worlds in poor financial shape.

On the rewards of his role

The rewards are in supporting the education and research output of the leading scholars in both countries on Irish-Canadian research topics, and in seeing the developing academic cooperation between our two nations resulting from the scholarships. I also take pleasure in the execution of the Irish Government contract to develop the Irish language in Canadian universities. This program has been remarkably successful; thanks to the great dedication and enthusiasm of the Irish language teachers we have been sending to Canadian universities these past three years. There is great interest in Canada in the Irish language, seemingly more than in Ireland.

On the ICUF’s future plans

It is our plan to continue with both the Dobbin and the Irish language scholarship programs, but we are totally dependent on getting sponsorships. The Dobbin Scholarships are named for our Canadian founder-benefactor, Craig Dobbin, who in 1993 donated £I million to University College Dublin to fund a chair in Canadian Studies (I was then the university’s Registrar/Deputy President.) It is the Foundation’s intention, currently under way, to get both our Governments to agree a Memorandum of Understanding, an MOU, to fund the program of the Foundation for the exchange of scholars.  We have great friends and supporters in Canada’s Government, led by Minister for Finance Jim Flaherty, and the Speaker of the Senate, Senator Noel Kinsella, who is a graduate of University College Dublin, as well as Newfoundlander Loyola Hearn, Canada’s Ambassador to Ireland, and many others, so we are hopeful that a core funding of the Foundation will be agreed by the two Governments so that we may continue with our exchange of scholars. In the past, we have had substantial corporate and private sponsorship support in both countries, but that is much harder to get and maintain in these difficult times and we must look to our Governments to keep the Foundation and its programs alive. We continue to have a full program of visiting Dobbin scholarships in both directions in this current year, as well as a continuation of the Irish language program which will have Irish language lecturers in eight Canadian universities, and funding for two students from each of those universities who will attend the month-long Irish language course in Connemara, Co. Galway in the coming summer.