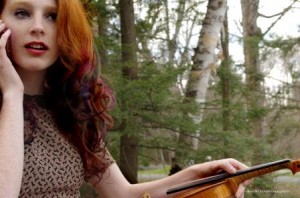 After just one year at the Dublin Institute of Technology’s Music Conservatory, Canadian fiddler Kathleen Gorey-McSorley has discovered innovative traditional music and acquired a new band and a new album. But, the flame-haired teen from eastern Canada told Celtic Life International that there has been some homesickness along the way…

“The music here is fantastic,” Gorey-McSorley said from Dublin as she concluded the first year of her four-year program in Irish traditional music and performance. “That’s widely known, but you don’t understand just how amazing the scene is until you’re immersed in it.

The fiddler said she has “always leaned towards preferring the real Irish stuff, but I’ve really enjoyed playing innovative traditional music. Irish trad music is headed in an amazing direction and I’m so happy that I’m living now because of the way the modern and fusion side of trad is growing.”

Dublin has proven to be exciting and informative for the young musician, still only 17, who hails from the province of New Brunswick.

“In Dublin, there is so much to see and places to go. However, I was surprised by how much I miss Canada. When I left for Dublin I was ready to take on the world and possibly never go back except for summers and shows…just live in a billion different countries for the rest of my life. Being away from my home and family has made me realize that I’m really an East Coast girl. I’d still like to live in a billion different places, but I will always return to Atlantic Canada.”

The teen, who also sings and plays piano, mandolin, banjo and tin whistle, credits the musical melting pot of her home province with nurturing her early development.

“We are surrounded by many influences in New Brunswick…In fiddling, for example, we’re close to Cape Breton so we have their influence, but we also have the influence of the Old Time competition playing in Quebec and Ontario. Sixties folk music icon Don Messer grew up in New Brunswick so we have the real Old Time stuff from him too. And from our heritage we have a strong Celtic tie to the music.”

Despite her youth, Gorey-McSorley is already known on the international circuit, including in Ireland, where she’s played at the Fleadh Cheoil na h’Eireann trad music festival in Cavan, and at Dublin’s Tradfest.  In Canada, she has performed at Cape Breton’s Celtic Colours International Festival and with the Royal Nova Scotia International Tattoo.

The precocious musician released her second CD Ceol Binn (Irish for Sweet Music) in July 2010.  The CD was nominated for a 2011 East Coast Music Award as Roots/Traditional Solo Recording of the Year.  It also received two Music New Brunswick nominations.

On her new album, Bid the Muse (the name comes from the poem The Tower by Irish poet William Butler Yeats), Gorey-McSorley plays with new friends from Dublin — Eoghan Mac An Ghaill on button accordion and flute, and Maria Geheran on piano and backing vocals.

Her new band mates will also tour with her in eastern Canada and the eastern United States this summer as Kathleen Gorey-McSorley and Bid the Muse. “We come from different musical backgrounds, so when we play together there’s a really unique sound,” she said.

Gorey-McSorley’s musical development began when she stayed up with her dad on Saturday nights to hear the music on the Grand Ole Opry show and decided she wanted to play the fiddle. When she was eight, she started music lessons. “My parents had noticed when I was very small that I was drawn to music, but I think it was a surprise for everyone just how drawn to music I was – especially as I come from a family of athletes.”

She is looking forward to the next few months of performing in North America.

“It’s exciting because I’ll be getting to play at home, but also because I feel that the release of this album and this tour is the start of a new chapter in my career. People will see a side of me that I haven’t really shown on stage before. With the new vocals, most of which are original, and the innovations in the instrumentals, a lot of what we’re doing is brand new.

“I’m still very young and still learning about life and the world every day, but I don’t think audiences will feel like they’re just watching some little girl play the fiddle. I’ve put a lot of myself into the new set list and I’m excited to show that to people back home.”