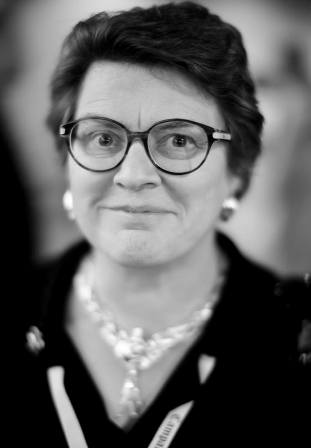 Alexandria, Virginia based Kelly McCarthy is the President of the North American Manx Association. Recently she answered our Seven Celtic Questions.

What are your own Celtic roots?
I am Manx. My father’s family goes back over 500 years in the same fishing village, Port St. Mary, on the Isle of Man, where I grew up. The 1511 Manorial Roll shows the then MacKelly family on the same farm that one of my cousins still farms today. When I wander around the island of my childhood there are signs everywhere that we’ve been around a long time. My maiden name is Kelly but I use it now as my first name. It’s how I carry my Celtic identity with me.

Why are those roots important to you?
Most people like to have roots. It’s interesting to me that when the North American Manx Association hosts a table at a Celtic event people come and tell me they’re Manx. And when I ask when they came to America they’ll say something like 1715! It’s clear that people identify as being American but have a sense of “being” from somewhere else. My roots are important because to me, the Isle of Man is so much more than a rock in the Irish Sea. Its beauty is permanent. Its people are stubborn and kind. We have clung to our independence despite attempts to consume it, and have hung on to our self-governing status despite various assaults from the UK and EU. We have the oldest continuous parliament on the planet. We acknowledged women as equals many years before our neighbors. We sent more than our fair share of men to fight in the world wars. Through ingenuity we developed world-class industries to deliver a first-class standard of living to people of all walks of life. I’m proud of our resourceful and caring community that treasures its culture, its people and its pristine environment.

What does it mean to you today to be of Celtic heritage?
When I moved to America in 2000 I got swept up in the Washington Manx Society and actually thought it was an odd thing to do. I’m Manx, I figured, I know all about the island. I don’t need to be in a heritage society. But then I woke up to the fact that the Celts played an enormous part in the building of America. I look at towns like Christiansburg in south-west Virgina, which was named for a Manxman, and reflect how such places needed to be built from the ground up. Then I got involved in the North American Manx Association and met people whose ancestors came to America from the island to labor, to mine, to farm, to fish, and I thought: I want this story to be passed to my children.  They were born on the island but moved here when they were little. I want them to know that a just a few generations back, their compatriots came to America and stamped their Manx mark on this new land.

How are you involved with the Celtic community?
I am the current President of the North American Manx Association and the Washington Manx Society. I also manage the NAMA blog, run the Facebook page and edit its Bulletin. So I need to keep up-to-date with Manx events in order to share them with the wider North-American Manx community. I am trying to build a bridge between the Isle of Man, and Canada and the United States. I try to keep the Manx authorities aware of opportunities for outreach in the US and Canada, and to encourage people over here to go back “home” and find out more about their heritage. Currently, I am on a mission to bring more Canadians back into the North American Manx Association, but I’d also like to see a resurgence in the heartland of America. It’s estimated there are a million people of Manx descent in America, and we’d like to find them and share a little of their Manxness with them.

Why is it important to keep Celtic culture alive?
I’m not sure it’s that important in the grand scheme of things, but it’s interesting to have a connection to where we came from. Going back to what I said about the sense of belonging that Americans have for their “home countries,” and the history of the Celts in America, I believe we need to do a better job of explaining what we all left behind and why. And I truly believe we need to more widely promote how important the contribution of Celts to the American cultural landscape has been.

Is enough being done to preserve and promote Celtic culture generally?
I think the arts do a really good job at getting the Celtic message out. But my big dream would be to have a National Celtic Museum. I think it’s time to toast the Celts that built the country and share their stories. On the Isle of Man we have a visitors’ heritage trail called the Story of Mann that links everything from the Celts, to the Vikings, to the crofters, fishermen, farmers, miners, schools, and government in a seamless trip around the island. I’d like to see something like that here. All of the Celtic nations could share their unique contributions to the America we know today in one place.

What can we be doing better?
As each generation stretches us further from the Celtic exodus of the 19th and 20th centuries, the link to a “homeland” becomes more tenuous. If we wish to fan the flames of Celtic heritage, we must attract young people to our associations and events. And while social events like Celtic Fairs are a brilliant way to deploy our best weapons — music and the craic — I believe there is a real market for a Celtic Studies elective in colleges and universities.