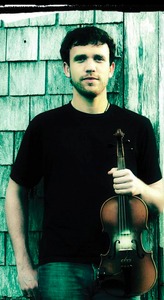 It was quite a sight last night along the boardwalk in Hastings, Barbados; the Mackenzie brothers from Cape Breton – one, Angus, a piper, the other two, Callum and Kenneth, fiddlers – leading a late night music session at a local watering hole. Recently we spoke with Kenneth about his roots and the family tree.

What is your own ethnic heritage/background?
I was born and raised in Mabou, Cape Breton on the east coast of Canada.  My father moved here from South Uist in the Outer Hebrides of Scotland and my mother was a Rankin born and raised here in Mabou, having roots that go back to the Lochaber area of Scotland.

When and why did you get involved with music?

Our parents raised my siblings and I speaking Gaelic and immersed us in the local Gaelic music, song and dance tradition of rural Mabou and area.  My mother was an avid Gaelic supporter in the local community and further afield and instilled that same pride in us from a very early age.

Are they the same reasons you do it today?
They are.  That grounding in who we are and where we come from is a strong part of who I am, in music and in general.  I strongly believe that culture is something that holds a value beyond dollar signs and benefits.  Not to say I haven’t enjoyed the rest of it!  But I definitely still do it because I feel it’s a part of me and celebrating my culture is a critical part of me comes naturally.

What have been some career highlights?
I’ve had many fantastic trips with the Beaton Sisters Band, also from Mabou along with other groups.  The Lorient Festival in France and Celtic Connections in Scotland are two of the more memorable ones.  I also got to do Celtic Connections, the Blas Festival and Ceolas in Scotland with my brothers Angus and Calum, which were great, in that playing with them is something we did throughout our formative years and to go abroad and do it on stage for other people is a neat experience.  However, it’s hard to beat a good night at the Red Shoe Pub in Mabou.

How, when and why did you get involved with Celtic Festival Barbados?
I got involved through Hamish Moore of Scotland.  He is the common link and I’ve known him since I was a beginning piper in my early teens.  His ideas, opinions and understanding of our music brought me a greater appreciation for it all.  The possibility of this trip was proposed to my brothers and I and we grabbed it whole-heartedly.  It’s a really one-of-a-kind experience to get to perform at a festival such as this – and in such a setting! – and we can’t wait.

Why is it an important event for the Celtic community there?
It’s important in that it brings together artists from around the world and brings them to Barbados to celebrate our common Celtic ancestry and life in general through good times and music.  What more can you ask for!

Are we doing enough to promote and preserve Celtic Culture generally?
I think the efforts over the past 10 years or so and beyond have been incredible and I have many mentors and people I look up to for the efforts that have gone into promotion of the culture through festivals or working with government and in preservation as well

What can we be doing better?
I think the more we can do at a grass-roots level, the better.  There’s an incredible young group of kids at home these days who can stepdance, sing a whole barrel full of Gaelic songs and play the tunes to the songs on at least one instrument.  They love getting together and are building friendships and an appreciation for their people and culture that will blossom through the rest of their lives.  The more of this we can do, the better and more meaningful cultural preservation (or maintenance) will be.

What’s next on your creative agenda?
I’m working on a piping group called Nuallan with three other pipers from Cape Breton Island.  It was a project initiated with the Gaelic College in Cape Breton and aims to represent and maintain the Gaelic-dance style of piping that was found here on Cape Breton Island and the Highlands of Scotland and which was focused on the rhythms and musicality associated with our dance tradition.  We have a spot at this year’s Celtic Colours International Festival along with some performances through the summer so I’m looking forward to that.  I’m also looking forward to the dance season kicking into high gear imminently here on Cape Breton Island!