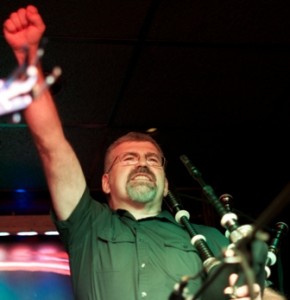 His indifference to childhood lessons in piano and trombone left Kevin Palm thinking he was not a musician. Then, at age 39, the Ohio-based aviation worker heard piper Scott Long perform and felt an immediate connection to the sound. Now, 13 years later, Palm is an accomplished traditional piper, in demand as a Celtic rock and solo performer.

As often happens with life’s turning points, Palm’s introduction to piping seemed to happen by chance – in 1999, he was in Oklahoma City for work when he saw an ad for the Tulsa Oklahoma Scottish Games and Gathering and decided to go.

“The featured musical entertainment was Seven Nations, a Celtic rock group based in Florida.  Scott Long was their piper, and seeing him perform was a revelation to me.  I had never heard bagpipes live before, and his performance totally blew me away,” Palm told Celtic Life International.

“The next day, I bought a cheap practice chanter and book combo at a local music store and tried to learn on my own, which you should not do with the pipes!  I began taking formal lessons when I returned home a few weeks later.”

Learning the pipes as an adult has been hard and occasionally frustrating.

“I tend to want to make quick leaps in learning new music or new playing techniques instead of putting in the time to learn like a younger player would,” Palm said. “I get frustrated because my abilities do not seem to improve as quickly as I think they should. Plus, my fingers don’t have the flexibility they would, had I started at a younger age.”

But he has been passionate enough to persist and, in recent years, Palm has enjoyed sharing his growing skills with others. He works at the Cleveland Traffic Control Center in Oberlin and his center had control of United Flight 93 when it was hijacked and crashed in Pennsylvania on September 11, 2001. Every year since, Control Center employees have held a ceremony at the flagpole and plaque that was erected in honor of the flight’s passengers and crew.

“A few years ago, I decided to do something personal to commemorate the event, so I brought my bagpipes to work and played Amazing Grace at the flagpole. Word spread, and as a result I’ve been incorporated into our official 9/11 ceremony.”

In March, Palm had the honour of entertaining dozens of U.S. military veterans at the Ohio Veterans’ Home in Sandusky. “One of the medleys I played incorporated the anthems of each branch of the military, and the vets from each service sang along. It was a very humbling experience. I continue to be amazed by the strong emotions that bagpipes stir in people.”

Besides Scott Long, Palm has been influenced by the music of Robert Mathieson, formerly the Pipe Major of the House of Edgar Shotts & Dykehead Pipe Band.

“My first instructor recommended that I listen to as much quality solo piping as I could, and he recommended Mathieson’s CDs.  He was a great inspiration for my playing techniques.  Currently, I listen to Stuart Cassells and the late Gordon Duncan, who brought piping to a whole new level in his short life.  I love the Red Hot Chilli Pipers, mostly because they show how bagpipes can be more than a folk instrument.  They play into the Celtic rock theme that first inspired me.”

The piping scene in Palm’s part of the world is strong, with around a dozen pipe bands in the Cleveland/Akron area where he lives. The pipers range from performing bands to high-level competition bands. The city of Wellington is home to the Ohio Scottish Games, as well as the Ohio Scottish Arts School.  Ohio also has half a dozen Irish festivals including the massively popular Dublin Irish Festival.

Palm’s musical education is ongoing — he currently competes at the EUSPBA (Eastern United States Pipe Band Association) Grade IV level. He has begun competing in piobaireachd competitions and finds the Highlands-based genre is extending his repertoire. He is also an occasional performer with two Ohio-based Celtic rock bands, Dulahan and Homeland. “Playing with them has brought me full circle to the beginning of my piping interest — Celtic rock.”

The pipes have made Palm’s adult life a musical adventure. “Every day I see different possibilities for the instrument, and I love to explore them.”