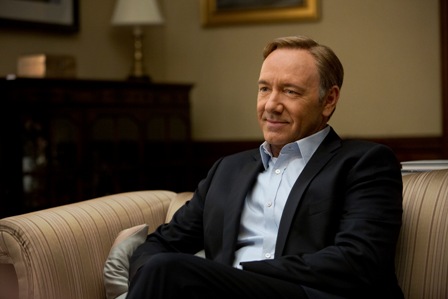 Currently, the public face of Kevin Spacey is his role in House of Cards as the face of America’s dark, political underbelly. But the 54-year-old, New Jersey-born American of Welsh ancestry is connecting back to his Celtic roots thanks to his position as artistic director at The Old Vic Theatre Company in England, giving him the proximity to film in Dublin and holiday in Scotland.

When a teenaged Kevin Spacey dabbled with matches in his sister’s den, the resulting fire landed him a spell at military school. It’s something of a well-placed reversal of trends then for the Academy Award-winning actor to discover that art imitates life, with the Hollywood star thrust into his portrayal as the deliciously Machiavellian military college graduate Frank Underwood in Netflix’s House of Cards.

Thankfully, the actor’s grappling with a military education may be where the parallels end, though young Spacey outdid his screen counterpart in being given the boot from military school for whacking a fellow pupil with a tire.

Of course, my initial fears about meeting this great man were unfounded. With a raising of the cheekbone or a subtle but notable glint of the eye, here’s a true ambassador of modern filmmaking who can switch from sinister to sincere in a flash. He’s fresh, philosophical, modest and yet, you sense, deeply complicated. And you quickly realise Spacey’s not really of this era of film, a fact that might explain his startling absence from the box office in recent years.

“I’ve been busy,” he exclaims, wide-eyed and disbelieving of the initial enquiry that he’s intentionally stepped away from the big screen. “I think when you move out of the immediate limelight people assume you’re kicking back, either on a beach somewhere or in a clinic. I can assure you I’ve been doing neither,” he laughs.

The story stacks up. Spacey has indeed been busy, busier than at any point in his career in fact, although bringing to an end his decade as artistic director at The Old Vic Theatre Company in London may offer him some cerebral space to plot a return to the movie scene.

That he jumped at the opportunity to throw himself into theatre should not come as any surprise. Uninspired by schoolyard military parades, it was the stage that intrigued Spacey as a youngster. After a stint in stand-up comedy he enrolled into Juilliard’s four-year drama program. True to form, however, he left after only two years, quipping it was only a matter of time until his expulsion.

Post Juilliard, Spacey claimed small parts on the New York stage, supplementing his early forays by working as a shoe salesman and a supervisor in his apartment building. He undertook an admin job with the Shakespeare Festival, but when director Joe Papp saw him moonlighting in an off-Broadway production he wielded the axe, something that served only to encourage Spacey to follow his artistic dreams outside the office. I guess if there’s one thing we’ve learned about him, it’s that he knows how to make an exit.

“The abrupt conclusions of relationships are natural in life – we shouldn’t be embarrassed by them,” he laughs. “I’ve made some mistakes and there is a small amount of regret there, but I’d rather dwell on the great moves I’ve made!”

A determined Spacey built a portfolio of stage roles, and in expanding into film developed a skill for sadistic, unhealthy characters. He has notably portrayed the base John Doe in Seven, Roger ‘Verbal’ Kint in The Usual Suspects, and most recently the enigmatic, conniving Frank Underwood in House of Cards.

And while Spacey would often rather steer clear of any journalist waving a Dictaphone – he once famously said, “the less an audience knows about me, the better I can do my job,” – he is willing to break cover when it comes to discussing House of Cards, the coveted series he both co-produces and stars in.

Aided by Oscar-nominated director David Fincher and with Spacey at the helm, the show has become an international sensation gaining a cult following for its examination of high-stakes political behaviour.

“It’s the beginning of new golden age in series programming,” Spacey tells us, rather unapologetically. “House of Cards marks an important new era in drama. Now you can have characters that are very complex, that are not perhaps the sorts of winning characters you used to see on TV. Why? Well, because for many years television executives did everything they could to make all the characters on a TV show likeable. But we don’t want that anymore. Now, audiences are expecting character-driven series, with sinister overtones, dark humour, and where the lead character can be an anti-hero.

All of this seems to me the groundwork that was laid for us to be able to create a show long before we even knew we were going to do it.”

A certain pride must come with spearheading a turn in the television stakes, too. After all, the Netflix project is unique – an entire series ready for consumption in one almighty mouthful. There are no waits between episodes, no misplaced cliff-hangers, no leaked storylines. In a move away from the traditional TV box, and onto a streaming content platform, we are talking about one-hit consumption.

“Netflix was the only place that really believed in us and what we wanted to do,” he reveals. “I think it’s marvellous that series like Mad Men and Breaking Bad are revenging against a lot of those massive studio tent-pole films which cost hundreds of millions and have choked off the kinds of intelligent films that used to get made in the $40- to $50-million range. TV series are now doing the sorts of stories that movies used to do in the 1960s and 1970s, and that’s why you’re seeing more and more actors who only worked in movies before gravitating from film to TV, simply because you get to do much more interesting work.”

Content streaming is far from Spacey’s only avenue, however. Taking up the post at the legendary Old Vic theatre back in 2003 meant reaffirming links with the British Isles. He’s called the move “the best decision of his life,” and there is not a hint of disingenuousness in that statement.

“It was a remarkable thing for me to do at that point in my career because I was in demand in Hollywood and I could call my own shots. But theatre had always been the core of my experience as an actor and becoming a theatre director was always a dream of mine.”

“And it was an honour to be given the chance to save and rejuvenate the Old Vic and restore its reputation as one of the principal and urgent venues for theatre,” he continues. “I was able to help raise money to be able to do the kind of important and daring productions we needed to put on in order to compete against the West End, whilst also developing a realistic economic model that would ensure our survival. I’m very happy with what we’ve been able to achieve and I hope I’ve added to the legacy of a 200-year-old Victorian theatre.”

Being in the UK has also enabled the actor to delve deeper into some of the unmistakably Celtic elements that pattern his career. He spent some memorable time filming in Dublin and Cork for Ordinary Decent Criminal and says he struck up an instant bond with the Irish. “There are some people you just ‘get’ and for me the Irish have been so likeable,” Spacey declares.

“I’ve always had a good time in Ireland and there is something unique about the people and their philosophy on life. Ambition is central to who they are, but not in the same way as ambitious people in London or New York or Los Angeles. There’s a different class to them.”

Spacey was well-tipped last year to trump his Irish experience by taking the lead role of imprisoned rags to riches tycoon Sean Quinn, in another film which producer mastermind James Mitchell oversaw.

But it’s for Scotland that Spacey really yearns – after all, he has an elder sister who resides north of the border. And he’s been known to holiday in Saltcoats, a small town approximately 40 miles southwest of Glasgow. “I love open space, a bracing wind, the time to think. The roles I’ve had, either in front of the camera or behind the stage curtain, have always required a clear mind.

“Take Frank Underwood for instance,” he says, bringing the conversation back round to House of Cards. “He’s a wonderfully diabolical and delicious character. I don’t try to judge him and I don’t see him as the ‘villain,’ but rather as a very dynamic and charismatic figure. And through it all, I can’t but think isn’t it great to have a TV character who’s a truly manipulative and ruthless politician? And it’s all fiction, of course!”

He may have played out the political stakes on screen, but Spacey couldn’t see himself getting into the business himself. “No. I like to get things done. I want to have a goal. I want to do this thing and then achieve it. That’s how I’ve always managed my career. I think it would be impossible to get anything done in politics. You almost have to be a Machiavellian son of a bitch to get anything done.”

And while Spacey may excel at playing the Machiavellian, it’s certainly not the extent of his acting ability. Has he plans to return to the big screen once the series and his stage tenure are up?

“It depends on how many more years House of Cards will continue for. It’s an enormous investment of time and I’ve never been an actor in a movie that shot as many days as I’m shooting on this series. I’m looking forward to eventually directing some projects as well as acting in more films down the road. All I know is that I will have a lot more time on my hands to think about what I want to do as much as actually being able to do it. It’s an exciting time for me.”