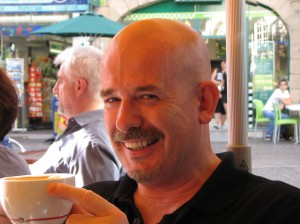 Kilian Kennedy is the co-founder and organizer of CeltFest Cuba, a week-long celebration of Celtic culture that takes place from April 13-20 in old Havana. Recently we spoke to him about the annual event from his home near Dublin.

What is your own ethnic heritage/background?
I’m Irish, from the town of Athlone, a historically important crossing point on the river Shannon that flows through the Irish midlands. There wasn’t a huge amount of music in my family, but my maternal grandfather played the melodeon, and it was common for the neighbours to drop by the house on a Friday night to play music, sing songs and swap stories by the open fire.

How, when and why did you get involved with the CeltFest Cuba?
I traveled to Cuba for a holiday in 2009. As I’m a struggling uilleann piper I brought my pipes along to get some practice in. On my first day in Havana I went to practice in a small park near the university. Some curious children gathered around, drawn by the indignant squeals being drawn from a strange instrument by a (no doubt) demented tourist. A man approached and invited me to a piping concert the next day. I was astonished to learn that there was any form of Celtic music being played in Cuba, as I expected it to be a bastion of Latin music such as salsa and jazz. I met my mentor the following morning at the Centro Asturiano on Prado, a tree-lined street that separates the districts of Centro and Old Havana in the city. I saw children and then more senior players and dancers taking their turn to play Asturian music on the stage and dance. The music was instantly recognizable as Celtic. After the concert a group gathered, intrigued by the uilleann pipes. My dreams of being a hit piper in Cuba have since fallen to ashes, as several of those musicians now play the instrument better than I do! Some months after I left Cuba, I received a call from a Cuban friend who had met with a fiddler who hails from Ontario. She wanted to organize a small festival. They asked me to be the artistic director of the proposed festival. I didn’t hesitate, as I had so enjoyed my stay there, and it sounded like an exciting and fun project to get stuck into.

What is the festival’s core mandate?
The festival is really about celebrating the Celtic cultural traditions in Cuba, and reuniting them with the “old world” traditions of their Celtic cousins. Musicians and visitors attending the festival sometimes support the music by donating instruments, which can be expensive and difficult to find for Cubans. The festival is primarily a teaching festival with recitals, concerts, historical talks and more adding to the fun. It is operated without profit, and as it builds in popularity it will provide benefits to the local Cuban economy and culture.

How has it grown over the years?
The first festival, in 2010, was an unexpected success. The Historian’s Office in Old Havana, the Irish Embassy and the Canadian embassy have been very supportive of the festival, and Teresita Trujillo, the Cuban ambassador in Ireland has worked hard to facilitate the event. There is a tremendous amount of good will out there for the festival. Our aim is to maintain a close connection with the local musicians and people, so that visitors who come can get a taste of the real Cuba and experience the culture in a way that is not normally available to tourists. Musicians who have come all want to return, and the word is getting out. Culture Ireland has led the way in supporting the festival, by way of grant aid to help Irish artists with travel expenses. Leading Irish traditional musicians Niamh ni Charra, the Begleys (Breanndán, Cormac and Breannain), Liam O’Maonlai, Nuala Kennedy, Gay McKeon, Donnacha Dwyer and others have already made the trip to Cuba. We’ve had representation from Asturias, Galicia and Switzerland at the festival. We’ve had top-class musicians over from Nova Scotia, PEI and elsewhere in Canada – Chrissy Crowley, Roy Johnstone, Rosie MacKenzie and many other great Canadian artists have attended and we hope to see more of them in future.

Who attends the gathering?
We have had visitors from all over the world at the festival, but the greatest foreign support has come from the Canadians. The festival is extremely popular with the Havana locals, but I’ve noticed that people are beginning to travel from the provinces because of their interest in the festivalWe are working on increasing the number of visitors from the US. It has been difficult for them to come because of the US embargo. John McAuliff of the Fund for Reconciliation and Development (FFRD.org) in New York has succeeded in obtaining a “people to people” visa to help Americans to travel.

What can they expect to experience this year?
The festival begins on the weekend of April 13th to April 20th. Musicians will meet their Cuban counterparts at the beginning and become acquainted with each other; we will have a few informal sessions, and perhaps sample the famous Cuban mojitos and daquiris! We’ll meet in the Paladar Las Estaciones on Calle Amargura nightly. Morning workshops (in fiddle, harp, guitar, percussion and pipes) will run all week. In the afternoons and evenings participants will have the opportunity to attend relatively informal recitals and sessions in a variety of hotels, taverns and bars. We may also have some impromptu performances around the city – Breanndán Begley and Liam Ó Maonlai famously got a set-dancing session going for some bemused tourists and locals in Plaza de Armas in the early hours one morning! Between festival activities the musicians will have lots of time to explore the city, perhaps to visit jazz clubs or maybe the Casa de la Musica to see some hot salsa dancing. The Cuba US People to People Partnership programme will run parallel with the festival. It brings American visitors to Havana during the festival to explore Irish-Cuban links, and the festival provides a fun diversion for them after their historical adventures. Margaret Brehony, an Irish historian who did her doctorate on the historical connections between Ireland and Cuba will present a talk on the subject to those who are interested in conjunction with Señor Rafael Moya on April 17th at the Jose Marti National Library. At festival’s end we often have a final concert. We hope to have Roy Johnstone (fiddle, PEI), Paddy Keenan (the “Jimi Hendrix” of the uilleann pipes), Dermot Byrne (accordion player with Altan, and 2013 Gradam Ceol TG4 Traditional Musician of the Year), Floriane Blanke (Celtic harp), John Faulkner (bouzouki/guitar/vocals), Rossa Ó Snodaigh of Kila (multi-instrumentalist), and a group of musicians from Co. Clare in the west of Ireland led by Eoin O’Neill. In fact, if you’re a musician, and you show up, you will no doubt be included in some of our activities! All are welcome, and there is no charge for any of the events.

Why is it an important event for the Celtic community there?
The festival is important for the Celtic community because it allows them to connect with Celtic musicians from around the world. It also gives them an opportunity to show how the tradition has evolved and flourished in Cuba. The festival gives musicians a great opportunity for musical cross-fertilization. A number of young Cuban musicians are learning Scottish and Irish tunes on the fiddle, harp, flute and whistle. The CEO of Na Píobairí Uilleann (the Piper’s Club) Gay McKeon has given master classes at the festival and donated a number of valuable uilleann pipes to promising Cuban students. Locals can share traditional Cuban Celtic tunes for visitors to add to their repertoire. PEI fiddler Roy Johnstone composed a tune in the local Celtic style which was a big hit at last year’s festival!

Why is it an important event for the non-Celtic community there?
It will help Cubans to appreciate the diversity of their musical heritage, and perhaps will remind them of historical Irish and other Celtic connections with Cuba. As more people are drawn to the event there will be economic benefits for the local economy and people.

What are the plans for the festival in the years ahead?
We’re hoping to continue to keep it intimate, with high quality instruction and performances, and with a continued emphasis on enjoyable musical and cultural exchange. Cuba is a warm, welcoming and beautiful place to visit, and sharing a common musical heritage allows the formation of a strong connection and friendship. It’s very strange and pleasing to me that you can come from a chilly and damp country, and form a warm bond with a people that you’d imagine would have little in common with you, because of the common heritage of Celtic music. We’re working on a small budget, and many musicians pay most of their own costs. As you can imagine, we always appreciate sponsorship in order to help reduce some of the costs. We are setting up an association – the CeltFest Cuba Association (Ireland), which we hope will facilitate the communication with the Cuban authorities. In due course we hope to have branches in Canada and elsewhere.

Is enough being done to preserve and promote Celtic culture?
Recently in Ireland I’ve noticed an upsurge in interest in preserving the Irish culture. Parents are sending their children to Irish-speaking schools, and many are picking up an Irish instrument or learning some of the traditional dances. I’m feeling very positive about the future of traditional Celtic culture in Ireland.

What can we be doing better?
Maybe I’m biased, but I feel that music is a marvelous way to promote the culture. Young people’s involvement in traditional music can lead to an interest in the Gaelic language and the other traditional arts. A number of bands in Ireland have made the Irish language a feature of their music. I’ve noticed a resurgence of traditional music sessions here in my hometown of Athlone. There’s a very high standard of musicianship, and all age groups get involved. So perhaps “ceol agus craic” (music and fun) is the way forward in promoting the culture. There’s no doubt that the Celtic festival scene is a great way to get involved, and we are doing our bit with CeltFest Cuba! If you think you can make it to CeltFest Cuba 2013, please consider bringing something to donate, perhaps an older instrument that’s in reasonable shape. Giving something simple like guitar or violin strings, or a whistle, bodhrán or flute is an easy way to gladden some Cuban’s heart. Esperamos verlos a todos en La Habana!