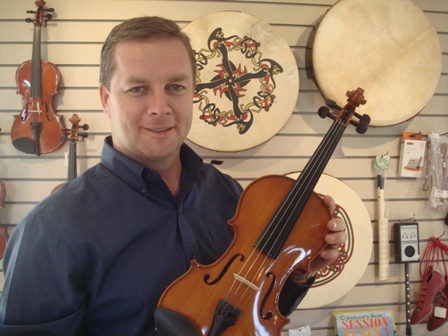 Sponsored by the Cape Breton Gaelic College, the 2nd annual Cape Breton Island Kitchen Fest runs from June 27 to July 4 in northeastern Nova Scotia. Recently we spoke with event founder and CEO Rodney MacDonald about what audiences can expect.

What are your own roots?
Scottish. My people from my father (MacDonald) and mother’s side (Beaton and MacEachen) came from the Lochabor area in the Highlands of Scotland. They settled in the Mabou, Inverness County, Cape Breton. I continue to make my home in Mabou with my wife Gayle and children Ryan, Sadie, and Angus Finlay.

When and why did you get involved with the Festival?
I wanted to create a festival which would promote and highlight the traditional language and music of the Gaels from Cape Breton Island. As such, I began contacting venues, musicians, and sponsors in late 2013 to see what interest there was in doing so. I was pleasantly surprised by the very positive reaction to the idea. As a traditional fiddler and dancer I felt it was important that we provide an opportunity to showcase our music, native Gaelic language, and culture in an authentic and meaningful way. The Festival makes these connections and features over 95% of musicians from Cape Breton Island in venues located in small communities, in a variety of settings. These include pubs, dance halls, and other small venues. Local food is also highlighted with various events occurring on site at the College throughout the week.

Why is it an important event for the community?
It provides millions of dollars in spin off at the beginning of the summer tourism season, employment for musicians, hosts, and sound technicians. Most importantly, it is a celebration of OUR music and culture showcased in settings which are naturally connected to our styles and communities. Promotion of this is a critical and important element to the mandate of the College.

Who traditionally attends the Festival?
In 2014 it was about 40% tourists from around the world and 60% local. The goal is to have a 50% balance of each in order to ensure visitors have a true and authentic experience.

What can they expect this year?
Over 70 shows, more than 150 musicians, venues throughout Cape Breton Island, and eat local program promoting local food, concerts, dances, pubs, plays, and a large outdoor gala concert and events on the last day at the College.

How has the event evolved since last year?
For 2015, additional venues with flexible times have been added, many which are family friendly. As well, the new Eat Local Program will see the festival partnering with restaurants throughout Cape Breton Island to promote our local product which we are very excited for.

Will you remain involved with the event in the years ahead?
Yes. As a performer I thoroughly enjoy participating and promoting our Gaelic Music, dance, and culture in a real and authentic manner. As an organizer, I am very proud of what the College has been able to do in partnering with these private and not-for-profit business entities. This is a win-win for Gaelic, Music, business, communities, tourism, and culture.

Tell us about the Gaelic College.
Colaisde na Gàidhlig is a world class educational institution with a strong culture focus. We offer onsite and online programming throughout the year. Our mandate is to promote, preserve, and protect the language, music, dance, craft, and culture which our people took with them from the Highland and Islands of Scotland.

Is enough being done to preserve and promote Celtic culture generally?
We need to continue more to preserve and promote the Gaelic Culture. It is why this festival along with various programs for youth, adults, and communities is so vital. For many years we were not taught our history, language, and culture. This is now changing and there is a ‘Gaelic Revival’ occurring which is very inspiring for all involved.

What can we be doing better?
We need more intensive opportunities in our schools and communities for youth to become fluent Gaelic speakers. Along with this, we need to promote our style of music and dance to our youth. There are many influences on our music and dance style in today’s world. As such, we need to be more aggressive in our approach to teaching our traditional tunes and style. The “Expressions” in our music is something which must be experienced and lived. Just mimicking it does not have the same effect. Also, it is important that individuals make the important connection between the gaelic language and style of music we play. Our young musicians and culture bearers need to be exposed to mentors who are able to provide context as to what is the truly traditionally ‘Cape Breton Gaelic Style’ which came from Scotland so many years ago. Much like the Gaelic language, many families and communities had their own unique dialect and traditional style which they brought with them and were exposed to. A good ear and timing is critical to this.