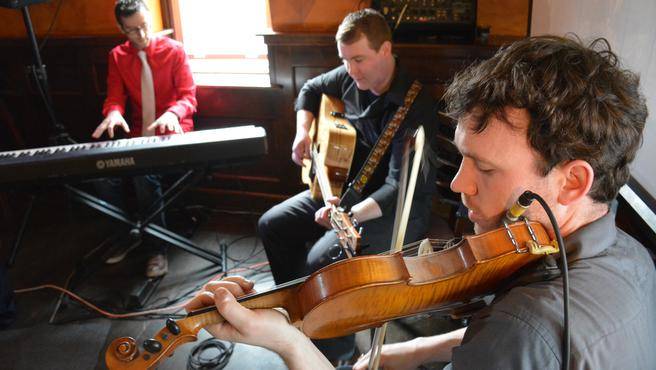 Summer in Cape Breton is a time for rediscovery, gatherings of family and friends, late nights at packed square dances, and never-ending chances to set toes tapping in the local music scene!

This summer, a brand new, Cape Breton Island-wide music festival is making its debut, celebrating just that! Between June 29 and July 5, the season will kick off with a bang! Set to be an annual celebration of Cape Breton-based traditional music and Gaelic culture, KitchenFest! brings the kitchen ceilidh to the forefront, welcoming one and all to sample some of the best music, food, and hospitality Cape Breton has to offer!

Inspired by the fun and festivities had during its 75th Anniversary celebrations in 2013, Colaisde na Gàidhlig / The Gaelic College in St. Ann’s is partnering with a variety of establishments across the Island to play host to over 80 different shows and events, all featuring the music, culture, and language of the Gael.

“KitchenFest! Féis a’ Chidsin! is a fantastic way to celebrate our Gaelic culture and showcase our traditional music scene,” said Gaelic College CEO Rodney MacDonald. “Meant for a local and the visiting audience, our aim is provide an authentic and memorable experience for visitors in communities throughout Cape Breton.”

“The Government of Canada is proud to support KitchenFest!, providing another showcase for Cape Breton’s vibrant music and cultural scene”, stated the Honourable Peter MacKay, on behalf of Rob Moore, Minister Responsible for the Atlantic Canada Opportunities Agency.

“The province’s lively music scene contributes to the rich mosaic that is Nova Scotia. One way we share our rich and diverse arts and culture with the world is through our many festivals,” said Communities, Culture and Heritage Minister Tony Ince on behalf of Economic and Rural Development and Tourism Minister Michel Samson. “The province is pleased to support this great opportunity to showcase the beauty of Nova Scotia and our Cape Breton traditional music and Gaelic culture.”

Over the course of 6 days, 10 establishments will host nightly performances. The mix includes Governors Pub in Sydney, the Old Triangle in Sydney, the Doryman Pub and Grill in Cheticamp, the Celtic Music Interpretive Centre in Judique, Bras d’Or Lakes Inn in St. Peter’s, the Red Shoe Pub in Mabou, the Keltic Lodge in Ingonish, Cabot Public House in Inverness, the Baddeck Yacht Club in Baddeck, and the Waterfront Centre in Whycocomagh. Guests such as J.P. Cormier, Buddy MacDonald, Howie MacDonald, Joey Beaton, Wendy MacIsaac and Mary Jane Lamand, Cyril MacPhee, Troy MacGillivray, Kenneth and Calum MacKenzie, Còig, and many more will be featured during the 60 intimate performances, all with a Gaelic-speaking host to usher in the night. Most events will run 9pm-12am, with a $10 cover charge paid at the door.

The final day, Saturday, July 5 is ‘Homecoming Day’, where the College campus comes alive with Pipe Band and Scottish heavy event displays, highland dancing demonstrations, a pub tent, artisans’ market, and a large outdoor variety concert featuring the Barra MacNeils. Tickets for the concert are $20 with youth 12 and under free. A pub night in the Great Hall of the Clans will follow. A concert featuring up-and-coming youth performers will be held at the Highland Village Museum in Iona during the week as well, with proceeds going toward initiatives for youth, Stóras na h-Òigridh (Treasures of Youth) and Na Gaisgich Òga (The Young Heroes).