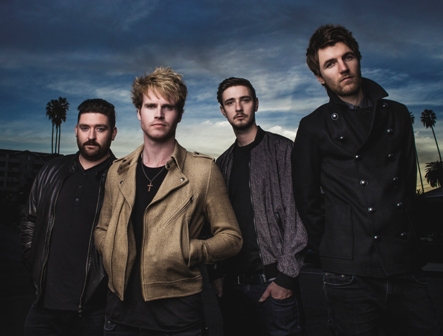 Irish quartet Kodaline are bringing their infectious brand of pop-rock to North America this fall, including a stop in Halifax, Nova Scotia tonight. Recently we caught up with drummer Vinny May.

What are the band members’ roots?
Well we are all from Ireland, myself, Mark & Steve all grew up in a suburb of Dublin called Sword,s and Jay is from a place called Straffin, which is just outside Dublin.

How long has the band been around?
We’ve been playing music together since we were 15, but I guess Kodaline was born once Jay joined the band back in 2012.

How has the group evolved since that time?
I guess when we figured out that we could do this for a living we took music more seriously! We dropped everything else we were doing at the time, college, jobs etc and just focused on song writing and becoming better musicians!

How would you describe your sound today?
This is such a hard question to answer, Kodaline sounds like 4 friends that love making music together! No bullshit, heartfelt music to make us feel better and hopefully other people too!

What were the challenges involved in recording Coming Up For Air?
There were no real challenges to be honest; the album was recorded and ready to go in like the space of 8 weeks! We had been touring for the previous 18 months so we were better (not great) musicians and better friends! We recorded a lot of the album with the 4 of us playing at the same time and just vibe-ing off each other which worked really well and we think that comes across with the energy of the songs!

What were the rewards?
That we were able to make a second record! We are so thankful and lucky to be in this position so that is our reward, that we get to do what we love every day!

What has the response been like so far?
The response has been incredible, we’ve been in festival season the past while and playing in a lot of countries we have never been too before and hearing people sing back the songs off the new record has been amazing. That’s the real test for us, as long people come to our shows and sing along that’s what it’s all about!

What makes a good song?
If it makes you feel any form of emotion and lives on longer then you could of ever imagined. If it was your favourite song when you were a teenager and still is then that’s a good song!

What are your thoughts on the state of the Irish music scene?
The Irish music scene is in an incredible place! The Irish music industry has ever gone away if are in any pub or venue in Ireland there has always been music going on, it’s just that every few years the spotlight gets shone on Ireland and another stream of bands and artists get recognition!

What does the band have on tap for the rest of 2015 and into 2016?
Well we have some more festivals and then we will be heading back to North for another tour and an Irish and UK tour towards the end of the year continuing into the new year with the rest of Europe! We are working on the 3rd record when we are not on the road so pretty busy!