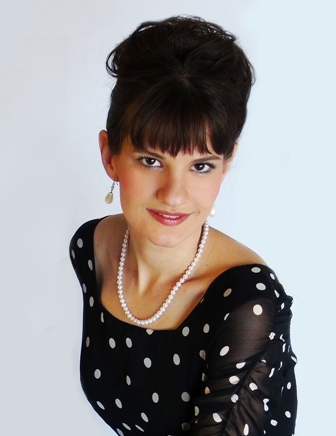 Whether she is singing gospel, opera, Broadway tunes, folk music, or Celtic songs, vocalist Kristyn Murphy is hitting all the high notes

Born and bred near the magnificent coast of Maine, vocalist Kristyn Murphy admits that she is very much a product of her upbringing and environment

“I grew up in an American, protestant home, heavy on the Irish and Scottish traditions,” shares the twenty-something singer via email. “My Mum’s side is Scottish and came to the U.S. by way of Nova Scotia, and my Dad’s family is of Irish descent and arrived before the famine.

“Mid-coast Maine, specifically, is home to many pockets of Irish. For example, Belfast, Maine, which was named by a group of Scots-Irish, has many traditions that have been kept alive over the generations. One way Belfast celebrates its heritage is by hosting a Celtic music festival every year. As a child, I don’t think I ever went to a festival or event in this area that didn’t include live Irish, folk, or maritime music.”

Under those influences, Murphy’s passion for her profession began at an early age.

“I can’t remember a time when I was not interested in music, but I do remember the first time I truly fell in love with music and felt the desire to sing; I was seven, watching a modern film adaptation of Verdi’s Rigoletto. By the time I was eight, I decided that I wanted to pursue music as a career. I gave my first solo performance at my sister Erin’s wedding. It was that first performance that really opened my eyes to the power of sharing stories through music.”

Growing up in a supportive church family, Murphy started singing at Sunday services.

“Faith has always played a huge role in my life and has greatly influenced my music. I discovered early on that singing sacred music was a great way to practice the storytelling aspect of singing. Although nobody else in my immediate family sings, I grew up in home in which music was very important. My Dad listens to a lot of Irish folk music – which is all about storytelling – and he still encourages me to keep adding Irish tunes to my repertoire.”

After years of performing almost strictly sacred music, her exploration of other genres has created a unique, hybrid style.

“I like to describe my sound as ‘Kristyn Murphy,’” she smiles. “It is a multifaceted sound, with influences from Irish, Scottish, Broadway, and folk music. I sing with a small ensemble: piano, violin, cello, percussion and guitar. I take away or add, depending on the setting or piece. I find inspiration in artists like Julie Andrews, Doris Day, Liam Clancy, and Johnny McEvoy.”

In recent years, the popularity of Celtic music has helped Murphy to grow her fan base.

“Groups such as Celtic Woman and Celtic Thunder have brought Celtic music into the spotlight on a larger scale, making it more accessible to people who might not otherwise be exposed to the music. Michael Flatly did the same thing with Irish dance and music with his show Lord of the Dance. There are many, many musicians that keep Celtic music alive on a much smaller scale. Celtic music is diverse, and has influenced everything from punk rock to American folk – it is never static.”

Likewise, her reasons for singing are also dynamic. “I sing because I love to sing ~ that basic foundation has not changed…

“As I matured, the stories or ideals that I share are maybe a little deeper and more fully explored. Singing is a great way to get people thinking about certain topics, to ask questions, to bravely share opinions. I have always been interested in history, and recently I have been focusing on using music as an avenue to preserve history and culture by performing a series of benefit shows at venues that are important to communities, such as museums, heritage centers, churches, old theatres, libraries, etc. I think sometimes music is seen only as a luxury entertainment, sometimes we forget that as a people what we create musically is representative of who we are, what we have been through, what we hope for, and desire.”

The rewards, she continues, are many.

“As a performing musician you have the opportunity to reach a lot of people, to explore many topics, to make statements, and tell stories all through music. As a recording artist you can create something that lasts forever. You can give entire history lessons in one song, or you can write and share a personal story. Communication through music is invaluable; people sometimes listen to the words of a song more than they would listen to somebody talking. Music can touch people on an emotional level. Music is fun, sad, and healing. The hard work and endless practice that goes into creating quality music is satisfying, and provides a sense of accomplishment.”

The vocation is not without its challenges, however.

“One of the hardest things is to convince folks to take that first listen. As an independent artist establishing a full-time career, I am still building a team. Having somebody to help with booking and promoting is important. Right now I am doing many things myself, with the help of a small team, but all of this behind-the-scenes business is time consuming, and takes away from rehearsal time. Obviously artists with a large company backing them, or artists with large sponsorships, might be able to do some things a little easier because they have ready funding. However, I don’t think that needs to be the reason for an artist not to create and share. Sometimes I think that people don’t realize that although music is entertainment, it takes a lot of time, energy, and money to produce.”

As such, Murphy’s latest effort, A Time to Remember, was a labour of love.

“This was a huge project to undertake, and I literally put a bit of myself into it. I cried, I laughed, I stressed and rejoiced. I emptied my bank account multiple times, recorded and re-recorded things. I spent many, many hours working with producer Dan Bouza during the mixing process. We mixed and remixed and then mixed again. I worked with a wonderful photographer from Bangor and put my Master’s degree in Interactive Media to good use and designed the CD artwork and did other promotional work. I have neither a large team nor a company with a large amount of money backing me. If I could do it myself, I did, and when I couldn’t I called my small team, and we got things done together.”

As she looks ahead to the coming year, performing and promoting the new recording, Murphy remains mindful of her heritage.

“When I was young I didn’t really pay as much attention to what inspired the culture around me. When my family ate meat and potatoes at almost every dinner or oats for breakfast, I didn’t think “oh these meals are very ‘Irish’, or such and such seems very ‘Scottish’”. When I was in school I didn’t think “oh the songs we sing in chorus are Celtic. So, though I grew up with a good deal of Celtic culture around me, I didn’t recognize it as being anything but the normal way of life simply because this area has such a huge history of Irish and Scottish families. Now I look back on my upbringing and see how these “everyday traditions” helped shape who I am today.”

“And they will be things I eventually pass down when I have children, as they are ingrained in my fiber. I understand why my Dad always suggests another Irish tune for me to learn each time I open my mouth. I am so grateful that I have somebody in my life that is so insistent that I help preserve culture in this way. I think it is important for us to understand our family culture, and why we do things certain ways. I have been doing a lot of family research lately so that I can better understand our customs, and so that I can share some family stories and interesting history in my concerts. Right now, this is my way of preserving and promoting our unique culture.”