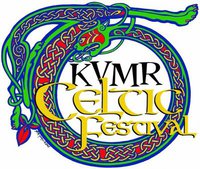 The Nevada County Fairgrounds in Grass Valley, Northern California is the setting of this weekend’s KVMR Celtic Festival. The community radio station has hosted the event for the last 16 years, and long-time broadcaster, and event co-founder, Annie O’ Dea Hestbeck shares how the gathering has grown over time.

What is your own ethic heritage / background?
I am originally from Ennis, County Clare, on the West coast of Ireland. I was born and raised there and moved to California in my 20’s in 1981. I have a very strong connection to Ireland as I am the only one in the family who left, so they are all still there so I get to go back there frequently, for family occasions and vacations.  My mother is an O’ Brien and my father is an O’Dea, both very strong clan names in County Clare.

How, when and why did you get involved with the festival?
I began my radio career with KVMR in 1987 and began to produce St. Patrick’s Day events and other Celtic concerts as fundraisers for KVMR Community Radio here in Nevada City, California. I wanted our area to experience the beauty and timelessness of the culture, and it helped immensely with my homesickness at the time! This eventually led to the idea of starting a Celtic Festival, as we had a great turnout for our Celtic events, but they were all indoors. We are fortunate to live in a beautiful area, surrounded by trees and rivers, and the idea of an outdoor event only made sense. The first one sixteen-years ago was a wonderful success.

What is the festival’s core mandate?
We live in a relatively rural area in Northern California surrounded by the beauty of nature, and the area is steeped in the history of the Gold Rush and many of the towns were established by hard rock miners from Ireland and Cornwall.  Harking back to that era and the history of the area, our hope is that people who attend the Celtic Festival will step back in time and enjoy the music, food, historical re-enactments and at the same time, support the fact that it is the biggest fundraiser for our very own, non-profit community supported radio station. KVMR FM is a volunteer-based, listener-supported radio station fostering positive social change by entertaining, informing and educating our community through the presentation of diverse music, cultural, news, and public affairs programming. To our audience, this translates to broadcasting rich with variety …a format pulsing with originality….and a journey alive with exploration.

How has it grown over the years?
Our KVMR Celtic Festival started as a one day event and quickly turned into a full two day celebration of all things Celtic. With each year, we have added more varieties of vendors, from genealogy to musical instrument makers, unique artisans and only the highest quality of merchants. The beautiful Celtic marketplace along with the addition of historical guilds and clans who perform and grace the fairgrounds all weekend, add such a richness, along the world class Celtic performers from Ireland, Scotland, Wales, Brittany, Galicia, Nova Scotia and beyond, that we have proud to have been ranked as one of the very best Celtic Festival in the United States.

Why is it an important event for the Celtic community there?
The Celtic Festival has brought a great pride of heritage and belonging to our local community, and has generated a huge interest in people’s curiosity of their own family roots. We now have a local Celtic Society and a place for folks to don their clan tartans and their tweeds and gather every year to celebrate their newfound Celtic knowledge, in many cases. It truly has become a gathering of the clans and tribes and we love it. I have had people come up to me at the festival and say it might be the closest they will ever get to Ireland or Scotland and they are so grateful for the rich experience, if only for a weekend.

What can audiences expect this year?
This year our line-up is stellar, from world class performers to regional and local favorites.  The Paul McKenna Band is coming from Scotland, three incredibly gifted sisters from Seattle who are rising to fame as fast as they fiddle – the Gothard Sisters – along with other hugely popular acts, including The Prodigals, The Elders, Bad Haggis, Samantha Robichaud, Hanz Araki and his band. We will have seven stages full of great talent on both days, along with so much more…..dance and music workshops, pipe-bands, Highland Games Competitions, Animals of the Celtic Lands, a pirate ship to board and explore.

From your perspective, are young people still interested in their Celtic heritage?
I believe young people are hugely interested in their Celtic heritage and it is a testament to the festival that we now have more young people in our own community who are taking up Irish dancing, Scottish dancing, playing the harp, fiddle, flute and bodhran. I am thrilled to see our local youth up on stage every year as part of our program, and performing with their music and dance teachers to tremendous applause. Many of them would have taken music lessons before, but since the Celtic Festival started, they are now learning jigs and reels as well.  It has generated huge interest altogether and continues to do every year.

Are we doing enough to preserve & promote that heritage?
I think that a festival or annual event that draws people together for the love of music and any culture is a great thing. One of the things I love about living in America is the enthusiasm of the people to embrace their heritage whatever it may be, and they have no problem telling you their ancestry either ! We all should be proud of where we came from and combining that love with taking part in parades in your town, or starting a club to get it going is a great thing, especially if there is not already one there. Supporting Celtic events and artists is a wonderful way to ensure and preserve the living tradition of the Celtic lands.

What are the plans for the festival in the years ahead?
Even as our festival has grown in numbers and enrichment over the years, it has still retained a true sense of a local community occasion, and has of course contributed to the local economy by bringing so many people to the area for the event. People come from far and near, and many have voted it their farorite event of the whole year to attend, so we must be doing something right! Our Youth Arts Program was started a few years ago, and gives our young people the opportunity to meet and learn from these talented Celtic performers and get a few free lessons in the art of fiddling, dancing, storytelling, songwriting and other workshops before the festival kicks off. We promote it through the local schools and the community. It has been a huge success and has given many young folks an interest and chance to go to the event for very little money, many of whom may never have attended or have been interested before.